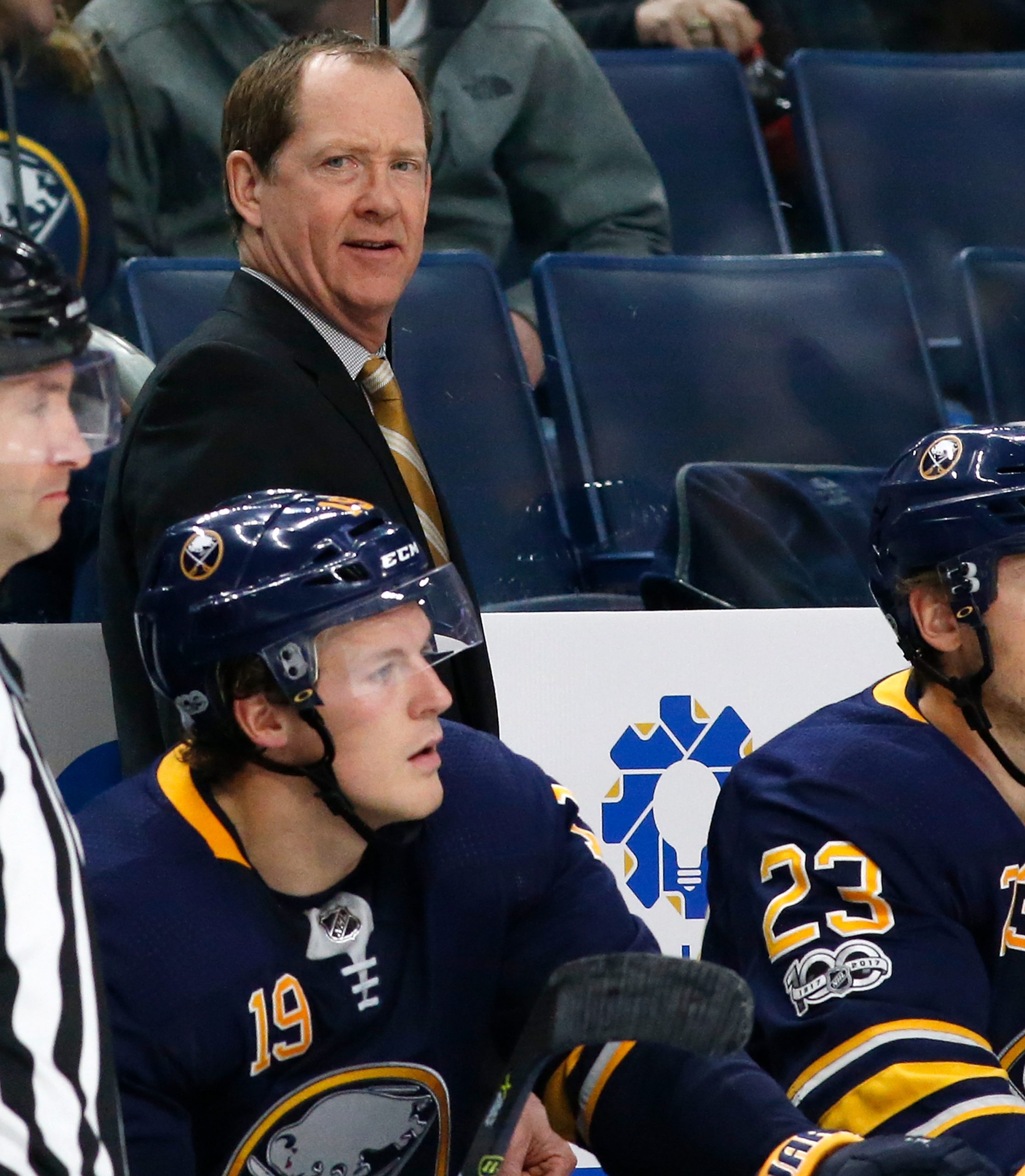 This year was supposed to be different for the Buffalo Sabres. New coach. 10 new players on the opening day roster. Revamped defense. Star center signs an 8 year contract extension.

The 2017-18 season is different, all right. In fact the Sabres somehow look even worse than last year’s squad that finished dead last in the Atlantic Division to miss the playoffs for the sixth straight year. They’re getting run out of buildings, sometimes their own, and the blame can be spread across the board. Robin Lehner’s rebound control and reliability in net has been a huge issue. The defensemen have mustered up exactly zero goals through 14 games, and often give up more chances than they create for themselves when trying to play Housley’s “speed” game. And outside of Kane-Eichel-Pominville, there has been little goal scoring, save a recent turn on from Ryan O’Reilly and Benoit Pouliot. Is Phil Housley in over his head as a first year head coach and to blame for a lot of the struggles as well? Tough to say, but he doesn’t seem to have much answers and all his positivity in the media seems a bit contrived, perhaps concerning.

I could go on and on about specific Sabres who aren’t producing, and in part to blame for much of the team’s woes. But this is Jason Botterill’s team now, and he really has two choices. Stay the course with a roster and prospects he inherited from a failed Tim Murray regime? Or move some big pieces in order to bring in the right players, not necessarily the most skilled players, that he and Phil Housley decide fit what they are trying to do in Buffalo.

Look at the Buffalo Bills. They shipped out some very good players and in return, got what they believe are better fitting players for what they are going for as a team, to go along with some draft picks for the future as well. Should the new Sabres GM look to shop some of his top players for the right return as well? At 4-8-2, I’m starting to think yes.

The Sabres don’t need to make like Ottawa and go out and get Matt Duchene, or make a move for another big name like Nikita Kucherov, but what about some proven performers in whatever their hockey trade is. I’m talking about guys like Justin Williams, Alex Killorn, Brandon Dubinsky, Matt Read etc. Guys with playoff experience under their belts who can help their teams on and off the ice become better. The return of Jason Pominville has been one of the only bright spots of the young season, so how about bringing in a few other proven vets to help steer this ship? Guys who block shots, kill penalties, know how to win, and yeah, can get you 30-40 points a year. For all the roster moves the Sabres made this offseason, they are sure looking more like the Same Old Sabres than they ever have…

If trading away once high valued guys like Sam Reinhart, Kyle Okposo, Rasmus Ristolainain, or even a prospect like William Nylander can get you back some quality, experienced, NHL proven players ready to battle now, that may what you have to do. In a league increasingly getting overtaken with youth, speed, and finesse, experience and character is underrated and often overlooked. Botterill has worked with and won with these types of guys in Pittsburgh – Chris Kunitz, Matt Cullen, Pascal Dupuis, Brooks Orpik, Nick Bonino, Trevor Daley, the list goes on. After a while, “But he was a first round pick!” or “he showed some promise on the power play last year” doesn’t win games and get you into the playoffs. You need proven players. Proven players that the Sabres just don’t have right now.

So it’s pretty obvious the roster needs a little change, even after the Richter scale measuring shakeup we felt this past offseason. But beyond that, some serious changes need to be made to both the preparation and execution of this team. I wrote just before the season how I believed the Sabres could make the playoffs if just a few things go right and changed for them this year. So far I am looking pretty foolish for thinking that, eh? The season is young enough that the Sabres could still prove me right, but without a major change in mindset, roster, or both, the playoff drought will grow to 7 years.

Two final thoughts. First, when are the Sabres going to give someone the Captaincy? The whole Captains by committee approach seems weak and indecisive, much like the way the Sabres have been playing. Is really nobody stepping up enough to standout and earn it? Not that NHL Captains are the end-all of success, but having an established, official anchor to lean on is pretty important. Next, where are all the young guys? Justin Bailey has shown in his little time this year he is ready to contribute. Nick Baptiste? Hudson Fasching? Brendan Guhle? New acquisition Kyle Crisculio? Get those guys up to Buffalo already. Sure, they aren’t going to shine at first playing for a struggling team but at least give them a fair shot. They’ve had some experience in the minors, its not like they are throwing Casey Middlestadt into the fire. At this rate, they can’t make the Sabres any worse.

So as the honeymoon of the season ends and we get into November, we will see what this Buffalo Sabres team is really made of. Much of their Western travel is over and they have a solid slate of home games this month against some teams like Montreal, Florida, and Carolina that give them ample opportunity to get back into. Although they will have to rise up and win more than just those if they want to get back to relevancy. It starts with a very daunting visit from the Capitals Tuesday night on national TV.