Charles Dillon, Coug commit before but failed to qualify, has re-upped with the Cougs, giving a verbal. A REALLY nice get, as we continue to land potential impact WR’s that can get on the field immediately. Dillon has prototype Pac-10 size (6-1, 190) and speed (4.5) and the Cougs beat out several schools, including Arizona, to get him back in the fold. While playing time is never guaranteed to any recruits, and that included J-Stewart last year, you can bet that Dillon will be fighting hard for time on the field next year. There are some WR openings, hopefully not another one with Hill of course, but some guys like Harvey and Martin are gone, so the chance to play early must be part of the appeal for WSU to land some of these WR’s of late.

Finally, 2004 USC struggled early with UW, but ran away from them late, winning 35-20. Some notes from the simulation:

The game was simulated at Husky Stadium on a warm, sunny, 70-degree afternoon. Corso and Herbstreit both picked USC, with Corso donning the USC helmet in the pre-game show (they actually do this in the game, it’s kind of funny but gets old).

UW took an early lead as Reggie Bush, trying to do too much in a game this big, fumbled a punt inside his own 10-yard line. The ball was swatted and kicked around and finally rolled into the endzone, where USC recovered. Safety. UW then took the ensuing punt and drove inside the USC 20 with Hobert throwing for about 60 of the 70 yards on the drive, but was sacked on 3rd down. UW kicked a field goal to go up 5-0.

USC then took the ball 87 yards in 9 plays, culminating on a Reggie Bush 10-yard slant over the middle for a TD. Bush carried 4 times on the drive as well, and Steve Smith caught a big 3rd-and-short pass in the flat that he broke Shane Pahuokoa’s tackle and went 30 yards. This early in the game, it was absolutely clear that USC was the faster team. Maybe this is because EA Sports didn’t think much of 91 UW, or they loved 04 USC so much that everyone was rated with a speed of 90 or more, but it was looking like a track meet.

UW then tried running the ball, but no success. USC’s linebackers of Grootegood, Lofa and Dallas Sartz were just too fast and physical. Beno Bryant and even frosh Napoleon Kauffman couldn’t get outside. USC-s D-line of Jackson, Patterson, Cody and Rucker were amazing. Every pass play Hobert had pressure, and either had to step up or roll out. They had a huge advantage up front. USC took the next punt and in two plays, Leinart hooked up with Smith for a 40-yard TD pass and it was 14-5, just like that.

The half ended with each team stepping it up on D, Leinart getting sacked on consecutive plays in two straight drives after Lendale White was able to get some good yardage inside. UW, meanwhile, started to abandon the run and while Hobert got some yards through the air to TE Aaron Pierce and WR Mario Bailey, he fumbled as he was sacked on the last drive of the half deep in USC territory. USC 14, UW 5 at the half. A big momentum changer at that point, as even with 04 USC’s talent on D, UW still moved the ball.

The second half saw UW come out on the opening kickoff and drive right down for a TD, making it 14-12 (why they didn’t go for 2, I don’t know). Hobert was great on the drive, going 5-for-5 and scambled for 17 yards on 3rd-and-9 deep in his own territory. The crowd was going nuts, it was a 2-point game and you felt like UW might have figured something out. But the momentum was short-lived.

Leinart, Bush and the rest were too much on the next drive, steamrolling right down the field for a TD of their own. Bush had a couple of runs where he made at least 10 yards out of what looked like nothing, and was clearly the fastest player on the field. This time the TE, Byrd, made a beautiful diving catch on a deep 25-yard fade into the corner of the end zone. 21-12, USC.

This is where the whole game changed. Hobert went cold, and went only 1-for-9 on his next 4 possessions of the 3rd quarter and was sacked 3 times. UW ran for a negative – 5 yards for the quarter. USC meanwhile mixed run and pass perfectly, getting a Lendale White 15 yard TD run and a Dwayne Jarrett post in front of the 2-deep safeties for a 37-yard score, and suddenly going into the 4th quarter, it was 35-12!

UW made a QB change at this point and went with Mark Brunell the rest of the way (not sure if the CPU did this because the game was over at this point, or if they thought they would rally with Brunell, but either way they made a change). Brunell was good, going 6-for-11 the rest of the way for 136 yards and a TD, but was also intercepted twice late in the game, the last coming on the last play of the game.

Leinart was his usual, efficient self. 298 yards, 3 TD’s, 1 pick. However he did take a beating, sacked 6 times and hit several other times. He even came out for 3 plays in the 3rd quarter and John David Booty replaced him for the series, going 0-for-2 in the air.

Bush was OK early on in the game, then kind of disappeared. However the 4th quarter was all Reggie, as he had 17 carries for 108 yards alone in the 4th. For the game he had 21 for 123. 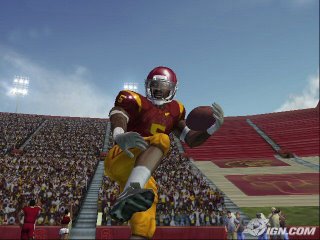 Some mismatches – As good as Dana Hall was for UW back in the day, he couldn’t handle Dwayne Jarrett and Steve Smith one-on-one. UW blitzed probably 70% of the time, and while that worked some times, it still was too risky to leave the UW corners out on the island with those guys. Leinart made them pay in the 3rd quarter as they ran away and hid from UW.

UW never could get it going on the ground. Hobert’s 17-yard run was the longest of the day for UW. UW’s o-line wasn’t rated very high, other than big Lincoln Kennedy the rest of them were just average, and it showed against USC’s D-front. And when USC blitzed, forget it! It was take 4 steps and then look for a place to lay down.

To sum it all up? USC 2004 is one of the greatest, most complete teams in Pac-10 history. I have no doubt that if you lined them up against any of the Pac-10 teams in the modern era, back to OJ Simpson’s teams, 2004 would come out ahead.