Good read on the D-line. Man they are SO FRIGGIN’ VITAL to how that defense plays this year! It trickles down all the way to the safety position. You get good run-stopping and pass rushing from your front 4, you don’t have to blitz as much, your LB’s can stay in coverage in the pass-happy pac-10, you don’t leave your DB’s in one-on-one situations, blah blah BLAH! But it’s all true. Our best WSU defenses revolved around a strong d-line. 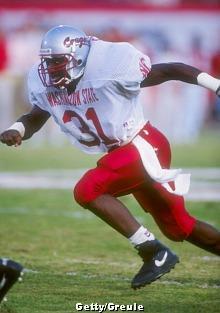 Look back to 1994 – Eaton, Sasa, DeWayne Patterson and a young man named Leon Bender were huge. They allowed superstar players like Ronnie Childs and Mark Fields to fly to the ball, remember? 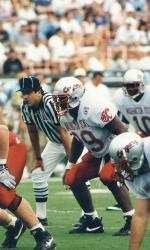 1997 saw the Senior Bender playing at an all-Pac-10 level, but Dorian BOOSE was a huge key as well and Spokane’s own Shayne Doyle playing solid all-around. 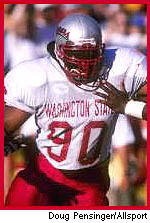 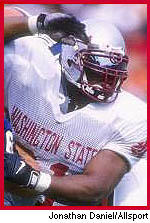 The 2002 Rose Bowl team with Rien Long and Jeremey Williams inside, Acholonu and Brown on the outside might be the greatest first-team front-4 we ever suited up, dating back to the Keith Millard days. 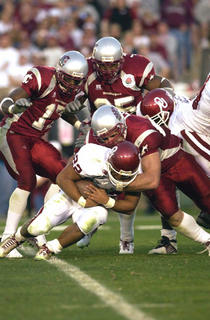 That said, the 2003 Holiday Bowl champs who Texas found to be UNBLOCKABLE with Williams and Tupai on the interior with Cook spelling them, and Brown and Acholonu with rising frosh Mkristo Bruce and Adam Braidwood on the other side might be the deepest front 4 we ever had.

Allowed guys like Derting free reign to do this:

All good football people will always tell you, it doesn’t matter if you recruit flashy skill position guys, you MUST have horses up front or else you will fail, period! Take a good look at UW in the last year under Neuheisel and the two years under Gilby, and you will see that line play on both sides of the ball can make – or break – your team. The UW team that went 11-1 in 2000 was strong with Tui, but man, that offensive line was one of the greatest, top to bottom, in school history. They would just plow defenses into tomorrow late in the game, and they flat-out controlled the line of scrimmage. They put up some sick rushing yards, especially late in games when the opposing front-4 would be running out of gas. I hate them, of course, but man, what a great line they had!