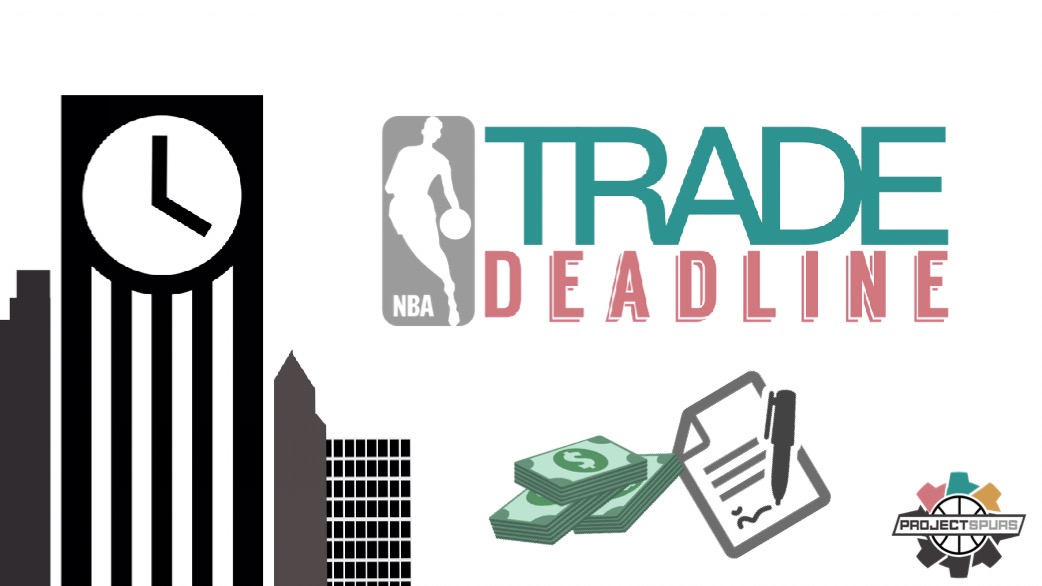 Friday, two days before San Antonio Spurs forward Kawhi Leonard started in the 2017 NBA All-Star game, Leonard was asked whether or not he thought the Spurs need to do anything before the NBA trade deadline Thursday for the Spurs to become more competitive.

Prior to the start of the season, Las Vegas projected the Spurs would win around 56.5 games. As they headed into the All-Star break last Wednesday, the Spurs were well over that mark, as they’re currently 43-13, which puts them on pace for a 63-win season. If the playoffs began today, the Spurs would have home court advantage against any opponent except the Golden State Warriors (47-9).

As Leonard mentioned, the Spurs are doing good right now, as they have two elements that most championship contenders need – a top-10 offense and top-10 defense. Heading into All-Star break, the Spurs had the league’s best defense (101.0 Points Per 100 Possessions) and 5th best offense (110.0 Pp/100). Plus, this isn’t even with the team being fully healthy for much of the season, as Pau Gasol sustained a fractured finger injury, where he missed 15 of the Spurs’ last 25 games.

As for the Spurs’ front office, though they haven’t said whether they will or won’t be active at the trade deadline, based on an evaluation timeline they might be using, one could infer they won’t be active in trade discussions come Thursday. The evaluation timeline referred to was one that was revealed a few years ago by former Spurs assistant and now head coach of the Philadelphia 76ers, Brett Brown. Back in November of 2014, when the Sixers were visiting San Antonio, Brown opened up about a timeline the Spurs use to asses themselves during the season.

“We sort of look to Christmas, and what goes on after Christmas to the All-Star break,” said Brown on that November day in 2014. “We always talked about ramping stuff up right before the All-Star break, when people were getting used to going on holidays. We felt like there was a weakness then, (and) you could just jump on it. The mindset of Post-All Star break, that’s sort of been the rhythm with him for me, since I was here.”

Using that timeline mentioned by Brown, you’ll see that the Spurs have still managed to have a top-10 offense and defense during both segments of their season, as the data below reveals.

As you can see based on the numbers, not only did San Antonio get better after Christmas on both ends of the floor, but they did that with Gasol missing 15 games, Leonard missing five games, and both Tony Parker and Jonathon Simmons missing four games each during that last stretch after Christmas to the All-Star break.

When you look at their body of work, the Spurs have been a bit puzzling when it comes to playing some of the teams below .500. San Antonio currently has more losses (30-7) to teams below .500, compared to teams above .500 (13-6). Though it’s a small sample size, you can also add that the Spurs have wins on the home floor of the top-5 teams in the NBA by overall record, as the Spurs have won games in Oakland, in Cleveland, in Houston, and in Boston this season.

While the Spurs could explore the trade market to see what they could get for players who might leave in free agency this summer, such as Patty Mills, Jonathon Simmons and Dewayne Dedmon, based on San Antonio’s history at the trade deadline, that type of move seems very unlikely, as all three of those players are core pieces in the Spurs’ rotation. While there is the chance one or all three of those players could get offers the Spurs might not be able to match this summer, San Antonio seems very likely to see where this team finishes this season as is with those pieces, rather than trying to salvage some value for them at the deadline.

While no one except those in the Spurs organization know exactly what the Spurs will do as Thursday approaches, based on the data and their body of work through 56 games, this current Spurs team have put themselves in a position to contend for a championship come the post season so long as they are healthy by that point.