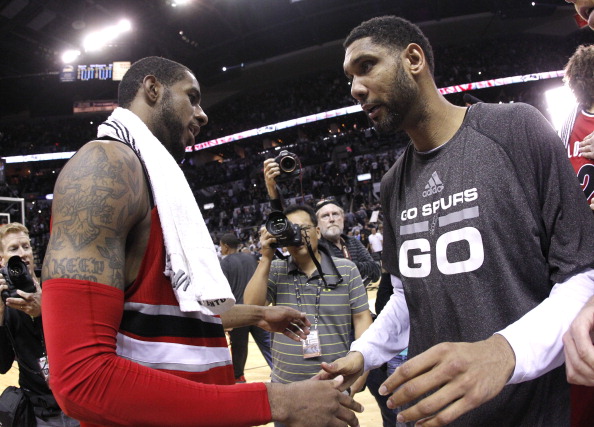 The San Antonio Spurs have been the most consistently dominant team in the NBA for a very long time now. They have made the playoffs 24 out of the last 25 seasons and have not missed the postseason in the past 18 years after drafting hall of fame power forward Tim Duncan. That is the longest playoff streak in NBA history.

In that 18 year period, the team has won five championships. After their loss in the NBA Finals to Miami due to some last-minute heroics by Jesus Shuttlesworth (or Ray Allen), people have started to question if the Spurs have lost their juice or not. However, as they have always done before, the Spurs have found players to fit into their system. With the recent blockbuster signing of LaMarcus Aldridge and the acquisition of veteran David West, it’s looking like San Antonio is going to be a championship contender again.

How do the Spurs do it? It’s very simple actually. Gregg Popovich has developed a very precise and strategic system that focuses on crisp ball movement and tough defense. In addition to Pop’s coaching genius, the Spurs’ front office always seems to find role players who fit perfectly around the foundation of Duncan, Parker, and Ginobli.

From the tough guards like Patty Mills to the stretch forwards such as Robert Horry, the Spurs’ role players have contributed just as much to their success as the big three. In recent years, other teams have tried to mimic the “Big 3” image, but San Antonio’s is the only one that still stands – 13 years strong. Consistency is what truly sets this great franchise apart from the others. Consistency in principle and personnel has kept this team successful.

Aside from the fact that he’s a walking double-double, Aldridge’s versatility makes him a perfect fit for Pop’s system. He stretches the floor with his shooting, has great post moves, and can protect the paint with his shot blocking ability. Watching him play is almost like watching a young Tim Duncan.

With Duncan’s career coming to a close, it’s looking like Aldridge is going to be the new sheriff in town. He and wingman Kawhi Leonard will be a powerful duo for years to come. The Spurs will continue their dominance and it is highly possible that they’ll win a title in the next few years.