Spurs suffer first loss of the season at hands of Jazz 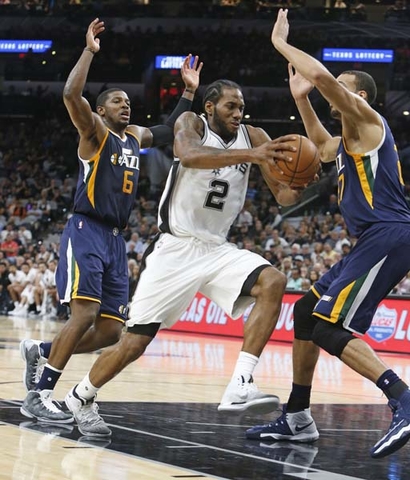 The San Antonio Spurs had one problem during the preseason: defending the three-point line. That problem reared its ugly head on Tuesday, sending the Silver and Black to their first loss of the 2016-17 season.

Kawhi Leonard scored 30 points, but it was not enough as the Spurs fell 106-91 to the Utah Jazz at the AT&T Center in a game they never truly had control of.

LaMarcus Aldridge was the only other Spur in double figures with 21 points on 8-of-16.

The Jazz were led by ex-Spur George Hill’s 22 points, including 10 in the final quarter. Rodney Hill added 19 and Shelvin Mack chipped in 14 for Utah (2-2), who have won 10 straight on the road dating back to last season.

San Antonio looked out of sync from the opening tip, trailing by 16 points in the second quarter. Leonard started off a 15-0 run for the Spurs, who would cut the deficit to four by halftime.

Tony Parker gave the Spurs a 63-60 lead with back-to-back buckets in the third quarter, but that would be it. San Antonio played catch up the rest of the game as the Spurs scored just five points in the final 5:48 of the game.

Up next: The Spurs are now 4-1 on the season and will have a few days off before returning to the court on Friday to face the Jazz on the road inside Vivint Smart Home Arena at 8 p.m.