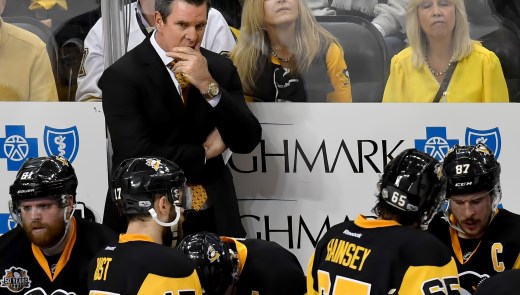 For the second time in as many years, the Pittsburgh Penguins find themselves on the footstep of history.

And just like last year, they’ll be facing a team that is making its first appearance in a Stanley Cup Final.

The Penguins route to get here has been arduous at best. They battled through a physical series against the Columbus Blue Jackets. They, once again, ousted the Presidents Trophy winners in the Washington Capitals in dramatic fashion. Then they climbed a mountain of ugly, defensive hockey in the conference final against the stingy Ottawa Senators.

There are elements of all three prior Penguins opponents in the Nashville Predators.

At this point, we know what the Penguins are all about. Let’s take a closer look at the Predators and what the Penguins can expect as they attempt to defend the Stanley Cup, becoming the first team to successfully do so since the 1997-1998 Detroit Red Wings.

If you found yourself frustrated by the Ottawa 1-3-1, I’m afraid I’ve got some bad news for you.

The Predators also run the 1-3-1 trap. The good news is, it’s a lot less passive than what we saw from the Senators.

The Senators version of the 1-3-1 played deep and backed up straight into goaltender Craig Anderson. There wasn’t an aggressive element to it. It was reactive rather than proactive.

Nashville does things a little bit differently. Their 1-3-1 focuses on a puck side attack. They’ll aggressively collapse on the puck side of the breakout in an attempt to generate turnovers and have a three-man unit head off to the races in the other direction.

Let’s take a look at some video.

In the clip above, we can see Nashville established in a clear 1-3-1 alignment in the neutral zone.

As Anaheim skates the puck up the far boards, the 1-3-1 shifts to the puck side of the ice. The middle man in the center “3” shifts out of the center of the ice and puts pressure on the puck-side of the Ducks breakout here.

Nashville will routinely do this and it’s something the Penguins have to be aware of. The Ducks made the smart play here, because the entire 1-3-1 shifted to the puck-side of the breakout, the Ducks dumped the puck into the opposite corner. They shifted this play from right to left and gave their forwards a really good opportunity to retrieve this dump in.

Therein lies the key to successfully retrieving pucks against the Predators. Take a look at the deep defenseman in the Predators 1-3-1 in the clip above. He also shifts along the far wall. That means if the Ducks dump the puck straight ahead, that deep defenseman ends up with the best chance to retrieve it. He’s got a 20 foot head start on everybody else. That’s an easy breakout opportunity for the Predators. Instead, by dumping the puck to the near side, the Ducks give themselves a 50/50 puck battle in the offensive zone.

This clip is another great example of Nashville’s 1-3-1 collapsing on the puck carrier.

Once again, the middle man of the center “3” pushes to the puck side of the breakout and clogs everything up at the offensive blueline.

Take a look at how deep the back defenseman is. Nashville really has their deep defenseman play as far back as possible. He’s able to get into position to retrieve this dump in with time and space to flip the puck the other direction and start the breakout for the Predators.

In this sequence, the Ducks forwards aren’t helping their defenseman out any. I expect the Penguins to counter this structure by bringing numbers with them through the neutral zone. In the above clip, the Ducks forwards are standing at the blueline waiting for a pass. That’s a death sentence against this system.

It’s also worth mentioning that the Penguins breakout is well equipped to handle this. The Penguins send one forward wide up ice by himself, and two forwards in tandem up ice together. They’re adept at touch-passing and finding little seams between defensemen. They’ll need to continue that to have success on the breakout.

Here’s a final look at this structure before we move on. I think this clip is a testament to how disciplined the Predators are. They’re capable of running this structure even in transition. As the Ducks skate this puck out of their own zone, the Predators align in their puck-side 1-3-1 and force the Ducks to dump this puck into the zone, providing them with next to no passing options in the middle of the ice.

Like the example above, the Ducks make a smart play on the dump here. They throw this puck into the offensive zone in a 50-50 puck battle situation. If they had sent this puck straight ahead, they’d have no forwards chasing it with speed. It’d go straight to the stick of Pekka Rinne and off the other direction.

Personally, I think the Penguins handled the 1-3-1 pretty well against the Senators. It was the defensive zone that really gave them a problem.

Nashville doesn’t really collapse on their goaltender like the Senators did. Although the main goal is still to protect the slot and take away time and space, the Predators go about it in a much different fashion.

I think the Penguins are going to have a little bit more space in this series to do the things they want to do offensively, but the goal to getting there is still going to be arduous.

The Predators run a strategy that is best described as a “Box Plus One” – it breaks the ice down into four quadrants. This system manifests itself on the ice in two defensemen and two forwards creating a box structure in front of the goaltender with a third forward roaming at the top of it.

It’s a great way to protect the front of the net and the slot, and still have your team in a position where they have three available bodies in puck battles.

The Predators are pretty disciplined in this system. You get a real sense of how this thing works in the above clip. The Predators give themselves two distinct advantages here. The first is a man power advantage along the wall. The second is two players at the top of the box that can pounce on the defensemen posing an offensive threat from the point.

Although this is significantly different than the Senators approach to protecting Craig Anderson, it still takes time and space away from the attacking team.

As the Ducks transition into the zone in the above clip, the Predators box up to put pressure on the boards and in the slot. Even though the Ducks are able to get a simple screen on the goaltender, there’s no real threat here because of the presence of the predators defense in the slot area of the ice.

The key to getting chances here is activating your defense into the play. That’s something that we saw the Penguins do with a decent amount of regularity against the Senators. While it’ll certainly be tough sledding against the Predators, the Penguins are going to have a little more room to operate, especially if they can keep the play moving. While it was important to move the puck high/low against the Senators, the Penguins can have some success here using the area behind the net to quickly shift the play east/west.

A Heavy Forecheck Can Make All the Difference

The Predators are prone to turning the puck over in the defensive zone. The Ducks were a heavy team that upped the ante on the forecheck throughout the course of the western final. This is the Penguins bread and butter. I expect to see them load up on Nashville’s breakout and create a bunch of chaos as the Predators try to exit their own zone.

One thing that shocked me is Nashville’s penchant for stretch passes. They really fan out and take up a lot of space up ice on the breakout.

The Ducks routinely attacked them at the point of the first pass and made things a little chaotic.

Remember, the Penguins run a 1-2-2 trap in their own right. This system is  the kiss of death for teams that want to attempt long stretch passes up ice. There are just too many legs and stick in the way. If the Penguins garner turnovers that send them off the other direction, that’s bad news for just about anybody.

Just as a quick reminder, this is the structure we’ll see the Penguins in. Look how deep their 1-2-2  gets. They can clog up virtually any area of the neutral zone. Keep that structure in mind as you look at the next clip.

One recurring theme of the western conference final was instances like this. The Ducks were able to disrupt the Predators controlled breakouts by sending a token forechecker into the fray. Stretch passes require time to execute, the Ducks weren’t willing to give the Predators the type of time necessary to make these plays.

We’ve seen Mike Sullivan attack teams with one forechecker and two forecheckers throughout the course of these playoffs, including last year. How will the Penguins attack the Predators? We’re going to find out tomorrow night. Whatever strategy they opt for, you can definitely disrupt what Nashville does with some pressure up top.

Stop back after game one for some more in-depth analysis of how these American coaches lined up against each other as the Stanley Cup final gets underway.