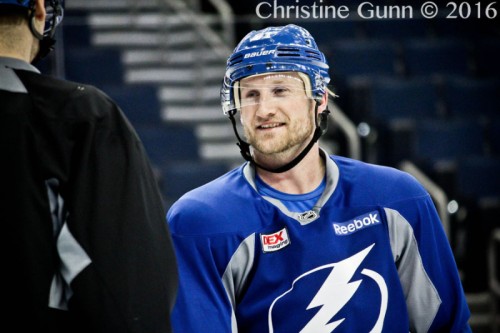 Steven Stamkos has been selected by the Tampa Bay chapter of the Professional Hockey Writers’ Association as the Lightning’s nominee for the Bill Masterton Memorial Trophy (The player who best exemplifies the qualities of perseverance, sportsmanship and dedication to hockey).

One nominee from each team is selected.

On November 15 in Detroit, Stamkos injured his right knee and required surgery to repair a torn meniscus. The injury has kept Stamkos off the ice until recently as he has battled back trying to get in game shape to rejoin his teammates for the playoff push.

”It’s an honor,” said Stamkos. “Obviously, I would like to have done all those things while being healthy this year. I’d probably trade that in. I take pride in the way I go about it and being a professional, how you prepare to go out and ultimately help your team anyway you can, both on and off the ice. The group we have here, there are plenty of guys who could have been nominated, it’s definitely an honor.”

”I can’t sit here and say I was extremely motivated and got up every morning looking to do some of the stuff, because it’s a grind, not only physically but mentally,’’ Stamkos said. “Some days it’s, ‘What’s the point of even doing this today. It doesn’t feel like it’s getting any better.’ You have those moments. You’re human. It’s about trusting the process and trusting the expertise of the people that I’ve been lucky enough to surround myself here. … You’re not going to take that step whether it’s the next day or two weeks later without getting up that day and working on something.

“This one is probably the toughest one just from a physical standpoint of not a lot of improvement quick. You had to grind it out, but it’s so worth it in the end when you can get out there on the ice and start practicing with your guys and gradually feel better to where are today. That was definitely the best with all that work. It’s tough when you’re in the mix to think about that, but there’s a sense of pride when you can get there knowing the work you put in.’’