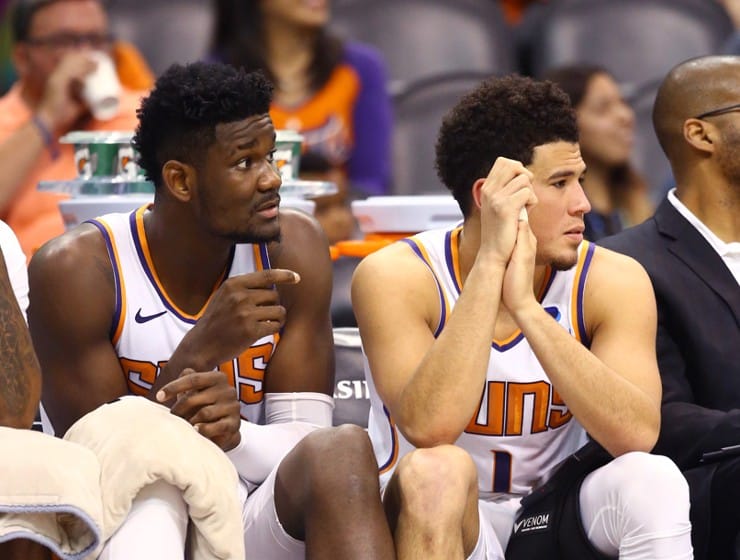 Suns head coach Monty Williams played center Deandre Ayton for only 17 minutes in Game 7 on Sunday. In one of the most shocking outcomes in NBA playoffs history, Dallas defeated Phoenix 123-90 at Footprint Center. According to oddsmakers, the Suns were six-point favorites at home. Home court advantage was nonexistent in this particular elimination finale.

Unless dealing with an injury, a coach should never have a starter on the bench throughout most of a win-or-go-home contest. Deandre Ayton was averaging 15.7 points, 8.1 rebounds and one assist per game against the Mavericks. So, what happened? Well, Ayton was forced to take a seat in Game 7 after he put up five points and accumulated four rebounds in 17 minutes played. He also shot 2-for-5 from the field.

More NBA news, trade rumors, injury updates and betting content is under the tab above.

This was Deandre Ayton's last defensive possession of the game that appeared to prompt Monty to sub him out for the final time. pic.twitter.com/Bqj2w47mA9

After the Suns lost Game 7 at home by 33 points, head coach Monty Williams was asked about his decision to bench Ayton. “It’s internal,” he replied. This response can mean anything. Maybe the fourth-year player did something to anger Williams prior to his benching. Did Ayton threaten to quit? It’s all just speculation right now. Bismack Biyombo earned only point and two rebounds in 12 minutes played. So, Biyombo was worse.

Furthermore, Mavericks guard Luka Doncic averaged 32.6 points, 9.9 rebounds and seven assists per game in that second-round playoff series. Doncic’s explosiveness is why Ayton should have been out there. Resting the player is one thing, but Williams took Ayton out for the remainder of Game 7. The decision to bench Deandre Ayton was questionable to say the least.

Monty Williams benching Deandre Ayton was not the biggest issue

By the end of the first half, Dallas outscored Phoenix 57-27. Considering the Mavs generated at least 30 points in the following second, third and fourth quarters, maybe Williams shifted blame where it didn’t belong. Had a fan not watched this blowout but checked out the box score, the person would have thought it was a preseason game based on the lack of effort by the Suns.

Therefore, maybe the question here shouldn’t refer to why Deandre Ayton was benched. Fans should be asking themselves: “Why did the Suns surrender another two-game series lead in the playoffs?” During the 2021 NBA Finals, Phoenix had a two-game series lead over Milwaukee. Bettors were expecting the Suns to win their first championship in franchise history. Then, the Suns managed to snatch defeat from the jaws of victory.

Additionally, Devin Booker shot 3-for-14 from the field in Game 7, and he finished his performance with 11 points in 37 minutes played. Chris Paul contributed 10 points and four assists in 31 minutes of action. To make matters worse, Jae Crowder closed out his outing with just five points. Except for Cameron Johnson, no one on the Suns showed up. This collapse goes beyond Deandre Ayton.

The Suns surrendered another two-game series lead in the playoffs

Did the Suns choke against the Mavericks? Yes, they did. Phoenix had a league-best 64 wins in the regular season. They finished at the top of the Western Conference standings. Phoenix even set a franchise record for most consecutive games won in a single season (18). Almost everything went right for them.

However, after their second-round series loss against the Mavs, the Suns became only the third team in NBA history to have 64 or more wins and not reach the conference finals. Putting aside the Ayton situation, the Suns had no business letting the Mavs come back in this series. For the final nail in the coffin, the whole team took Sunday off.

Regarding Ayton’s future with the Suns, he is currently a restricted free agent. Before the start of the 2021-22 season, the center was asking for a max contract extension. Though, the Suns were unwilling to make a generous offer to Deandre Ayton. Another team could offer a reasonable sign-and-trade deal to the player in the offseason. The 23-year-old earned $12,632,950 this season.