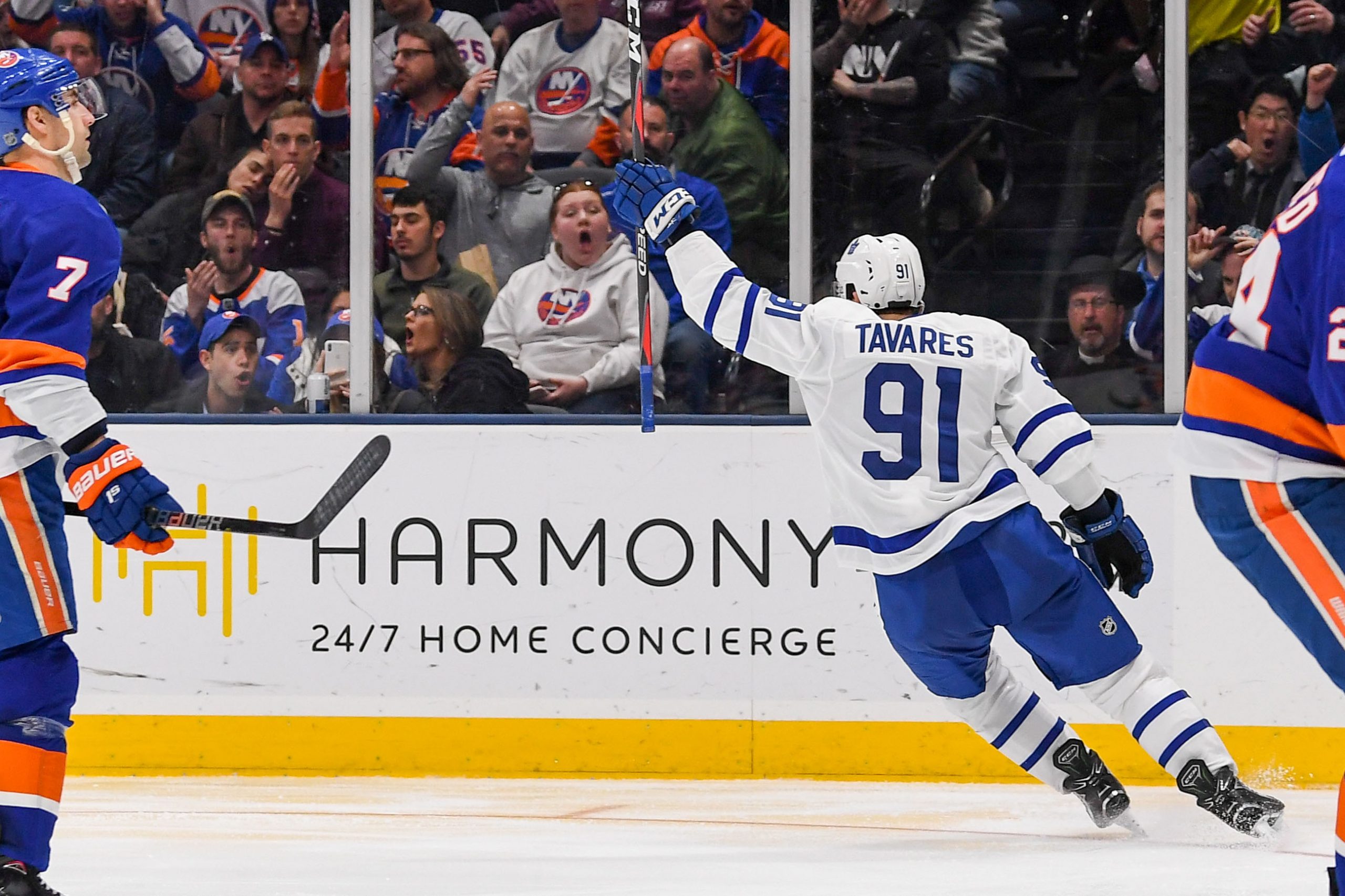 UNIONDALE, N.Y. — A late third-period push just wasn’t enough for the Islanders to rally from a two-goal deficit on Monday in a 2-1 loss to the Toronto Maple Leafs. The game marked the Islanders final regular season game on home ice.

The game took a tamer tone than the previous meeting between the Islanders and Maple Leafs, with Calle Rosen and former Islander captain John Tavares helping to lead the visitors to a win. Tavares remained public enemy number one on Monday, but the vitriol was far less intense than it was on Feb. 28.

Tavares, who scored for the first time against his former team, was booed every time he stepped on the ice. The fans chanted “We Don’t Need You” early in the game and when Islander legend John Tonelli was featured on the video board chants of “That’s JT” broke out.

And here are the “We Don’t Need You” chants #Isles #Leafs pic.twitter.com/p5bVeHiBw6

A third-period penalty against Tavares led to a loud ovation from the home fans.

“That first time was a little aggressive right from warmups,” Mathew Barzal said. “But our fans are passionate. Johnny expected that. Johnny is a really focused individual. You watch him out there he doesn’t let that stuff get to him. He’s dialed in on the game and obviously a great player, and he had a good game tonight.”

However, it was Tavares’ goal 3:50 into the final period that served as the game-winner and ultimately kept the Islanders from gaining any ground in the race for first in the Metropolitan Divison. A turnover in their own end allowed Mitch Marner to leave a drop pass for Tavares, who beat Isles starter Robin Lehner.

“They had an opportunity to clinch tonight and we saw their best,” Matt Martin said. “We were choppy at times, but we had some opportunities. Just couldn’t get them past (Frederik Andersen). Credit to them they played a really good hockey game and they got that huge second goal that was really the difference.”

As much as it may have stung to lose to their former teammate, the bigger disappointment was the missed opportunity the Islanders had. A win would have moved the Isles to just one point behind the Washington Capitals, who fell 5-3 to the Florida Panthers, for the Metro Division lead.

It also would have given them some more cushion between themselves and the Pittsburgh Penguins who are a mere two points back of the Isles.

“It’s unfortunate that we lost, but at the end of the day that’s a good hockey team,” Barzal said. “It’s a team that’s a cup contender. We’re right in that game. Could have definitely gone to overtime so that’s the way it goes sometimes.”

With the game never matching the intensity of the Isles’ previous matchup with the Leafs, New York’s performance on the ice mimicked that. A fluky goal from Rosen put the Islanders behind just over two minutes into the third period.

Tavares’ 46th goal of the season put Toronto up by two 3:50 into the third period. Jordan Eberle scored the Islanders’ only goal of the night with 5:05 left in regulation on the power play.

“They had a lot of desperation in their game,” Islanders coach Barry Trotz said after the loss. “We needed more in ours. We had some at the end. I thought the first period was pretty even. I thought the second period we were fine until they got the goal and they got some momentum there.”

After Monday, the Islanders are down to their final two games of the season. The Islanders have a trip to Florida on Thursday and then they travel to the nation’s capital to face the Capitals to close out the regular season.