Taylor Heinicke Should Be The Washington Commanders’ Starting QB 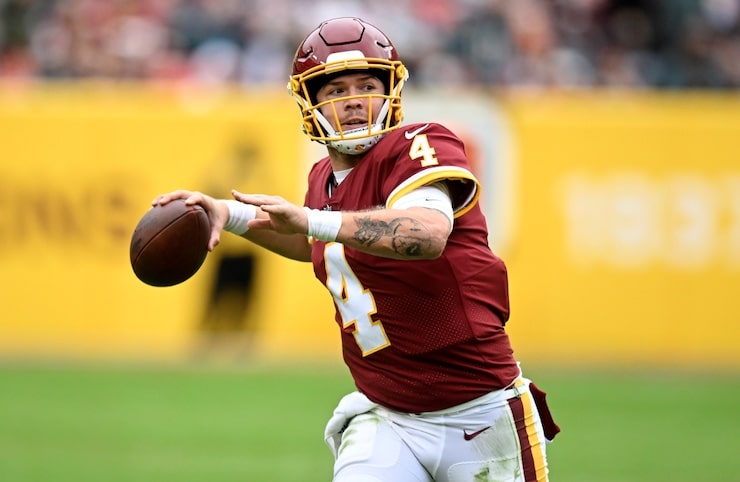 Since 2018, the Washington Commanders have cycled through 11 different starting quarters on their way to a 29-46 record.

During that span, an undrafted rookie from Old Dominion may have emerged as the best long-term starter.

Taylor Heinicke improved his record to 10-9 as the Washington Commanders’ starting quarterback with a win over the previously undefeated Philadelphia Eagles on Monday Night Football in Week 10.

While Heinicke’s stats weren’t pretty but he still managed to get the job done against the Eagles, completing 17 of 29 passes for 211 yards and one interception on the day.

With the win, Heinicke is now 3-1 as the Commanders’ starting quarterback this season and he’s helped erase an ugly 1-4 start.

He’s thrown for 740 yards with five touchdowns and four interceptions through four games.

Is There A Quarterback Controversy Brewing In Washington?

After the win over the Eagles, Commanders’ head coach Ron Rivera now has an interesting quarterback controversy on his hands, albeit a good one.

Washington traded for former No. 2 overall pick Carson Wentz in the offseason.

The Commanders were 0-4 under Wentz before he led them to a gutsy victory against the Chicago Bears in Week 5.

Earlier this week, The Washington Post reported that the team was preparing for Wentz to reclaim his starting role once healthy.

However, that could change following Washington’s win on Monday Night Football.

Wentz has performed well despite some early-season trouble along the offensive line. The 29-year-old quarterback threw for 1,489 yards with 10 touchdowns but threw six interceptions in just five starts.

Ball security could be a deciding factor for Rivera, though no quarterback truly has an edge in that department.

Like Wentz, Heinicke has been careless with the football at times, throwing at least one interception in all four of his starts.

While Heinicke hasn’t been quite as productive, Washington has found a formula for winning with him under center.

Washington has become more reliant on running the football in recent weeks, and it has paid dividends on the scoreboard, as the Commanders have won four of their last five games.

That should be more than enough to earn him at least one more week under center.

The Commanders have a pair of winnable games coming up on their schedule. Washington will play on the road at Houston in Week 11 before returning home for a matchup versus the Atlanta Falcons.