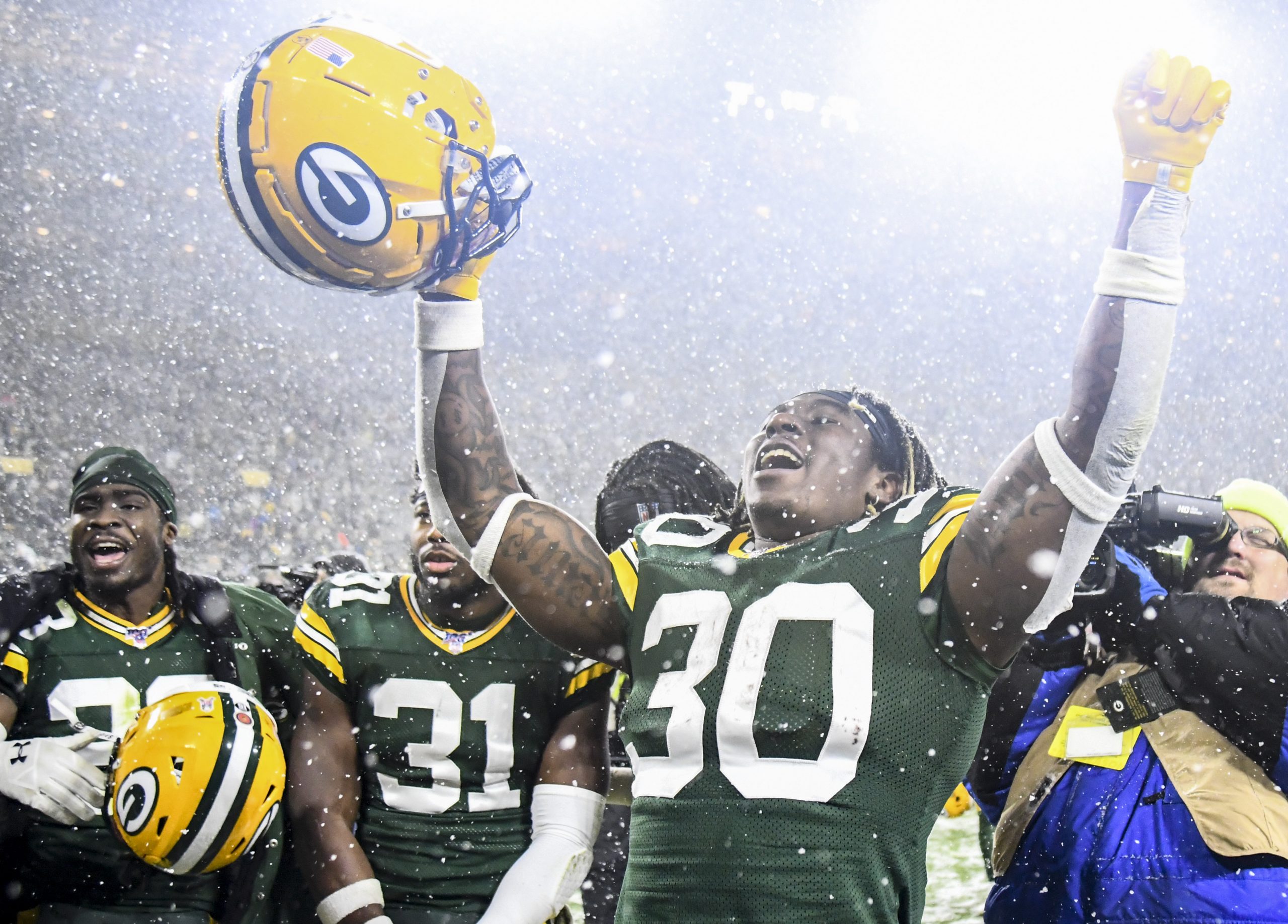 The Green Bay Packers held on for a thrilling 24-16 victory over the Carolina Panthers at snowy Lambeau Field Sunday to increase their record to 8-2 heading into the bye week. The Packers showed they learned some lessons from last week’s poor effort in Los Angeles and came through with a stronger all-around performance.

Aaron Jones ran for 93 yards and three touchdowns while Davante Adams hauled in seven passes for 118 yards to pace the Green Bay offense. The Packers defense managed to stop the Panthers and running back Christian McCaffery just inches short of the goal line on the game’s final play to clinch the victory.

Here are 10 things we learned from the Packers 24-16 win over Carolina:

The Panthers run defense is not strong and the Green Bay offense took full advantage, rushing 27 times for 163 yards and three touchdowns. The Pack averaged six yards per carry and the offensive line did a very good job of opening holes for Jones and Jamaal Williams who also pitched in with 63 yards on 13 carries.

The bad weather probably encouraged Matt LaFleur to call more running plays. He did and the team responded with a very strong game on the ground.

2. The Offense Did Spread the Ball Around

It was clear quickly in this game that LaFleur learned a lesson from last week’s game and spread the ball around a lot more on offense. In addition to 27 rushes, the Packers didn’t throw exclusively to Davante Adams in this game. The other wide receivers had 12 targets, led by Allen Lazard’s six, while tight end Jimmy Graham had four and the running backs totaled two.

Yes, Davante Adams had the most targets with 10 and the most catches with seven, but he earned those targets this week with some strong play and the defense couldn’t key on him like they did last week because the Packers were getting other players involved and doing other things well.

3. The Defense Bent but Didn’t Break

OK, this is getting to be a broken record, but the Packers defense had a better game than the statistics would indicate at first glance.

Yes, the Packers gave up 401 total yards and that included 5.2-yards per rush and a 300-yard passing game by Kyle Allen, but they did come up with key stops when it mattered, especially at the end of the game.

They also gave up a lot fewer splash plays, although they still allowed a 38-yard catch by D.J. Moore and a 21-yard grab by Jarius Wright.

The Packers managed to contain McCaffrey as a receiver, holding him to just 33 yards on six receptions, a 5.5-yard average.

The defense came up with a big interception when Tramon Williams stepped up and picked off Allen off a deflection by Adrian Amos and a momentum-changing fumble recovery by Montravius Adams.

The Packers defense came up big when they had to, even if the game wasn’t pretty, statistically.

Packers running back Aaron Jones ran for three scores against Carolina, tying him with McCaffrey for the league lead with 14.

This was also Jones’ fourth multiple touchdown game of the season after scoring two against Denver, four in Dallas and a pair in Kansas City.

The third-year man out of UTEP has placed himself into the NFL’s MVP conversation and gives the Packers a real chance to win games when Rodgers isn’t playing his best.

5. The Packers Let the Panthers Hang Around

Green Bay had several opportunities to close out this game but couldn’t quite come up with the “dagger” they were looking for.

The Packers went for it on the final play of the half at the one-yard line but came up short. Foolish penalties and missed opportunities gave the Panthers several chances to stay close and eventually they came within a few inches of having a chance to tie the game as time expired.

Against a better-quality opponent, the Packers may not be as fortunate as they were today against a good but not great Carolina team.

This wasn’t an outstanding game statistically for Rodgers, although he did make some very pretty throws. He completed 58.6 percent of his passes in the snow for 233 yards (8.0 yards per attempt) and did not throw a touchdown or an interception.

The Packers moved the ball well as a team and had the chance to put more points on the board, especially on the final play of the half.

The Packers franchise quarterback did a good job of spreading the ball around and the team did not commit a turnover despite playing in the snow for most of the game.

Rodgers’ final quarterback rating was 84.4, but it would have been higher had he thrown for even one touchdown. He didn’t need to though in the Packers victory.

7. Allen Lazard Is Moving Up the Depth Chart

Lazard continues to gain more playing time and once again was second among Packers wide receivers in catches (tied with Geronimo Allison with three), yards and targets.

Lazard has clearly won the trust of Rodgers and has made some solid plays for the Packers.

At times, his size seems to work against him as officials called him for a questionable offensive pass interference call that cost the Pack a key first down.

But Lazard’s arrow is clearly pointing upwards as the Packers head into the bye week.

8. Kenny Clark Had His Best Game in Weeks

Nose tackle Kenny Clark stepped up and made some plays against Carolina, making a bigger impact than he has in recent weeks.

Clark got consistent pressure on Allen up the middle and while he was not credited with a sack himself, he helped teammates get some sacks and pressures by getting penetration up the middle and preventing Allen from escaping the outside rush.

Clark was credited with four total tackles including one tackle for a loss and had a strong all-around game.

Jaire Alexander has not played up to the standard he set early in the season in recent weeks. Alexander was credited with six tackles and one pass defended, but he dropped a sure interception and was beaten several times during the game for key first down passes.

The second-year man out of Louisville drops too many possible interceptions which keeps him from being an elite cornerback.

He’s not playing poorly, but he is also not playing as well as he did earlier in the year.

The Packers are still struggling to cover opposing tight ends. This has been a big problem for the team all season long.

Greg Olsen had one of his most productive games of the season with eight catches on 10 targets for 98 yards. Six of his eight receptions picked up first downs for the Panthers and he did most of his damage in the fourth quarter when the Panthers were trying to get back into the game.

The Packers need to address this area soon or it will cost them in a big game down the stretch.