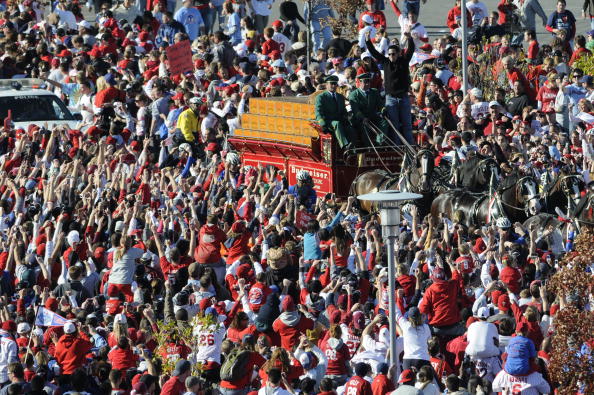 The corner of Broad and Sansom will always have a special place in my heart. In my travels around the city of Philadelphia, it is one of the few places that can smack me in the face with déjà vu. Whenever I walk by and look up at the windows above, I still see the “David Wright shot a 72 on Wednesday” sign (this became a battle cry for me whenever the Phillies played the Mets, regardless of whether or not Wright was in the lineup). That was the prime location I was able to snag on October 31, 2008, bright and early at 8:34 a.m.

There was electricity in the air; the championship drought was finally broken and the streets were flooded with red. I’m still waiting for someone to tell me where the last eight years went.

In addition to one of the happiest days of any Philadelphia fan’s life, it was also Halloween and the opportunity was not missed by the phaithful. Philly Jesus was walking around carrying a sign that read “Only Brad Lidge saves more than me.”

I remember being surprised that there weren’t more people already gathered when I dropped anchor on Broad Street. Those were the people who were probably stuck on Septa platforms (suckers). Shout out to the media on that one for discouraging people to drive because 95 was empty. But that soon changed and before long, it was impossible to move. If you had friends who were there and you didn’t go together, good luck to you. It probably would have been easier to find Waldo at Venice Beach.

The over two hours between when I found my spot with my dad and when the parade started felt like forever, but in a good way. It wasn’t the same type of anticipation one has when you’re waiting to go on vacation and can’t wait for time to pass. It was more of a “soak up every minute; because it’s going to be over in a flash once it starts.” The crowd in my vicinity progressively got rowdier, and I realized that my kind of people had found me.

We high-fived, tested the limits of our vocal chords, and just partied, a lot. I made sure I pointed out the Wright sign to every passerby, took pictures with strangers, and bartered cigarettes for beer. Is there anything better than the community of the fandom, especially in Philadelphia? That is not a rhetorical question; the answer is no; no there is not.

And then the air horns started to sound. The champs were on their way.

Confetti rained down from the sky ahead of the caravan of floats. And as it should have been, after what ended up being his final season in pinstripes, Pat Burrell led the way pulled by Clydesdales on the Budweiser truck with Elvis by his side. He stuck with us through it all, so it was only right that he got to ride solo and opened the show. I was on the side of Broad Street the trucks were closer to and before he passed me the Budweiser truck came to a halt and Pat clenched both fists, raised them above his head, and stood up. Then he sat back down and rode off into the daylight.

And just like that the era of Pat Burrell was over. In retrospect, I’m glad they put him first, because the deluge that erupted from my tear ducts as I watched him pull away was better to get over with first. My heart felt so full and empty at the same time.

As always, the Phanatic was sent in right after to lighten the mood. The time to be sad was over and then it was really party time.

The rest of the team was carried on massive flatbeds covered in Phillies’ logos. I ended up getting a beer shower from everyone’s favorite drunk uncle, Brett Myers and his partner in crime (and load) Geoff Jenkins. While it was too loud to hear anything, it was obvious that there were a lot of f words coming from the mouth of Chase Utley. Then there was that big one that we all remember, a soundbite that lives on to this day.

One by one the flatbeds passed and the parade culminated with the trophy pulling up the rear, glittering 100 shades of magnificent gold in the October sun. The ultimate prize, the symbol of the top of the mountain, and something some of us never thought we’d see in person. That’s when my dad, who had to work during the parade in 1980, started to cry. We’re a sentimental bunch, obviously.

Then that was it, it was all over. Just like that. Pandemonium in the streets ensued as the final flatbed pulled away and continued on the parade route. It was the double-edged sword of being at the beginning: it started earlier, but it was also over earlier. It was easily one of the happiest days of my life, and it will live in my memory banks until the day I shut my eyes for the last time.

I’m still waiting for someone to tell me where the last eight years went.