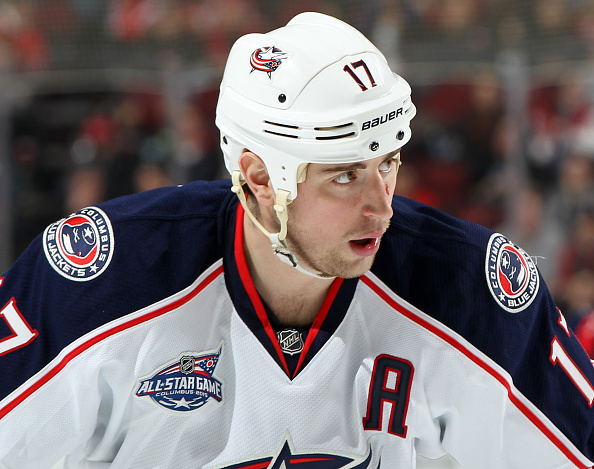 By now, you already know the goalie mayhem in the leadup to the Blue Jackets-Hurricanes game. Curtis McElhinney? Waived by Columbus and then claimed by Toronto. Anton Forsberg? Called up to be the backup. Sergei Bobrovsky? Out with illness, which dominoes Forsberg into the starter’s role (and Joonas Korpisalo to the NHL backup, at least for one night). And then, to shake things even more, Matt Calvert was sick, disrupting the fourth line and putting Dalton Prout in the lineup.

For me, the goalie situation was the story of the night, and continued to take up attention throughout the game for Columbus. A sleepy start to the match ended up escalating as both the Columbus and Carolina starters failed to perform in an admirable way. Hurricanes’ netminder Cam Ward was not good (3 goals on 27 shots against), and the Blue Jackets’ starter was worse: 4 goals on 27 shots against for Anton Forsberg. Add in an empty netter, and Carolina won 5-3.

It’s not a good start for the CBJ road trip, and it wastes a solid game for the Columbus skaters.

The Elephant in the Room: The Backup Goalie Situation

To begin, we have to get on some even ground: Curtis McElhinney was not (and is not) a good NHL goalie.

Since the start of the 2013-14 season, 49 different goalies have played 80+ games in the NHL. Among that group, Curtis McElhinney was the 7th worst in the league (via Hockey-Reference). That span covers McElhinney’s entire time with the Blue Jackets. In addition, McElhinney’s even strength save percentage in Columbus was a .912 (again via Hockey-Reference). Keep in mind, the NHL average even strength save percentage is around .920-.925 (and this factors in a surprisingly favorable start to the year for the goalie).

All of this is to say: Curtis McElhinney was a liability to the Blue Jackets when he played. Scraping up points is always essential, and for a team with playoff aspirations? Surrendering a goalie matchup every so often is a poor choice. None of this evidence reverses the repeated notions that McElhinney was an excellent teammate and a quality human. It does, however, mean that the Blue Jackets made a good decision in moving on to one of their two promising young goalies.

Which brings us to Anton Forsberg’s nightmare start to his NHL career. Over a meager 9-game stint in the past two years, Forsberg managed a bad .882 SV% (and a .885 EVSV%, via Hockey-Reference). Tonight didn’t change the early-career woes, as Forsberg finished with a rough .852 SV%.

And yet, at the AHL we see a completely different story. With the Falcons and Monsters each of the past 3 years, Forsberg has been a .927, a .914, and a .930 goalie, along with a stellar .949 SV% playoff run to the Calder Cup last year (via Elite Prospects). The middle full season isn’t quite as inspiring, but the rest of the resume is solid.

It’s easy to understand why Forsberg was called up to be the backup goalie, he has a history of excellent play in the AHL. It makes a lot of sense to replace “obviously bad” with “has a chance at being good.”

That makes Forsberg’s NHL performance exceptionally frustrating to-date. Is Forsberg unable to adjust to the major league style of play? Is Forsberg facing a big mental hurdle? Is the goalie just not an NHL talent? Are we just overly concerned with a sample so small that one or two good games would significantly change the story?

I don’t have an answer (heck, it could be a combination of all four factors). Unfortunately for the Blue Jackets, the team suffers while Forsberg either gets his issues sorted out (or is “proven” to be good or bad). Losing points against a so-so Carolina team isn’t a good recipe to keep up a playoff pace.

The Other Things: Skaters Were Also Playing

It’s unfortunate we’ll probably overlook the rest of the team because of the loss. Because the Columbus skaters were excellent through most of tonight’s game. Brandon Dubinsky was a shot differential force tonight, posting a 73.1% CF%. He was one of five players with a CF% at or above 60%, and the team ended up with a solid 54.6% CF% overall (via Natural Stat Trick).

Josh Anderson makes his own luck by throwing the puck on net. Puck stays in the air forever. Hartnell gives swipe at goalie for good measure pic.twitter.com/gMPUbGmL6H

Then, Brandon Saad fired on a two-on-one. Ward seemed to get most of the shot, but the thing trickled in anyway to bring the Jackets their 3rd goal.

Brandon Saad ties it up late in the second in an absolutely bizarre 2nd period. 3-3. #CBJ pic.twitter.com/vG3eF66jzp

Sadly, all that adds up to zero standings points.

The Tweet of the Game did not play, and is day-to-day (sickness).

Blue Jackets are back in action on Friday in Tampa Bay as they take on the Lightning.