The evolution of Zach LaVine 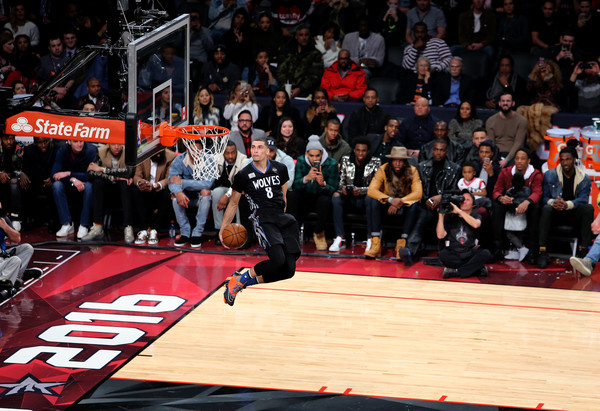 Before this year, not many thought of him as an elite shooting guard, given all the talent at his position like Jimmy Butler, Klay Thompson, and DeMar DeRozan.  Not anymore.  LaVine is in his third year in the league and is receiving a lot of praise.

Before we go into too many details, let us all take this moment to thank the late Flip Saunders for drafting and believing in Zach.  There was some skepticism at first, but he has grown into something special.

At UCLA, he was a stellar sixth man and drew comparisons to Russell Westbrook with his athleticism and playmaking.  The Timberwolves ended up taking him with the 13th overall pick in 2014.  In his first year in the league, he averaged 10.1 points, 2.8 rebounds, 3.6 assists, 34.1 three-point percentage, and 42.2 field goal percentage per game.  All that while playing 24.7 minutes a game and starting 40 games.

As people watched him throughout the season, it was evident how naturally athletic he was, but it was also obvious he needed to improve his scoring ability.  At the end of the rookie year, he won his first dunk contest and was named to the NBA All-Rookie Second Team.

Sadly, a fan favorite Wolves member, Flip passed away before last season started.  This event led to the promotion of Sam Mitchell, and the frustration of fans everywhere.  In LaVine’s second year, he came off of the bench more than half of the games due to Mitchell favoring the veterans Kevin Martin and Tayshaun Prince.  As the season was headed down the toilet once again, the Timberwolves needed to try something new.

During the All-Star break, LaVine seemed to find a spark.  In February, March, and April, he played more than 30 minutes per game and never averaged less than 14 points per game.  LaVine had his best stat line in March where he averaged more than 17 points, 49.8 percent from the field, 47.4 percent from the three, and 37.2 minutes a game.  Even though he did not start as many games as he should have, he improved most statistics from his rookie year.  LaVine finished the season averaging 14 points, 2.8 rebounds, 3.1 assists, 45.2 percent from the field, and 38.9 percent from three.  He also won his second consecutive dunk contest and was named Rising Stars MVP.

Coming into this season, Wolves fans were excited for LaVine to take the next step under new head coach Tom Thibodeau.  He put in a lot of work this offseason, working on his jump shot and attacking the rim, knowing he was going to have a strong supporting cast to get mismatches.  Andrew Wiggins, Karl-Anthony Towns, and Shabazz Muhammad are all young and very explosive on offense, which requires opposing teams to focus on stopping them.

The season is currently 16 games in, and he has shown tremendous signs of growth.  So far his statistics are; 19.4 points, 2.4 assists, 3.0 rebounds, 46.0 percent from the field, and 38.2 percent from three per game.  Comparing his scoring ability to other shooting guards he ranks sixth in scoring, 13th in field goal percentage, and 19th in three point percentages.

His offensive strides have completed the Timberwolves legitimate big three because now teams cannot only focus on trying to stop Wiggins and Towns.  This season he has proven that against the Memphis Grizzles, Orlando Magic, and Golden State Warriors when he scored 31, 37, and 31.  In those contests, he showcased that he can take over a game due to his ability to drain threes and attack the rim at a high percentage.

There are still times this year when he hits a cold streak and cannot seem to score, but it has only happened in three games against the Boston Celtics, Oklahoma City Thunder, and Denver Nuggets.  LaVine is no longer solely just a dunk master; he is also a scorer.  His game has evolved over the last few seasons, and he has the potential for a bright future.

At 21 years old, no one knows what he can accomplish.  There are times he looks better than Andrew Wiggins, which is a frightening sight for opponents.  If LaVine continues to improve, do not be surprised if he is an All-Star team in the next few seasons.  So far it has been an incredible journey for the Flip Saunders prospect.