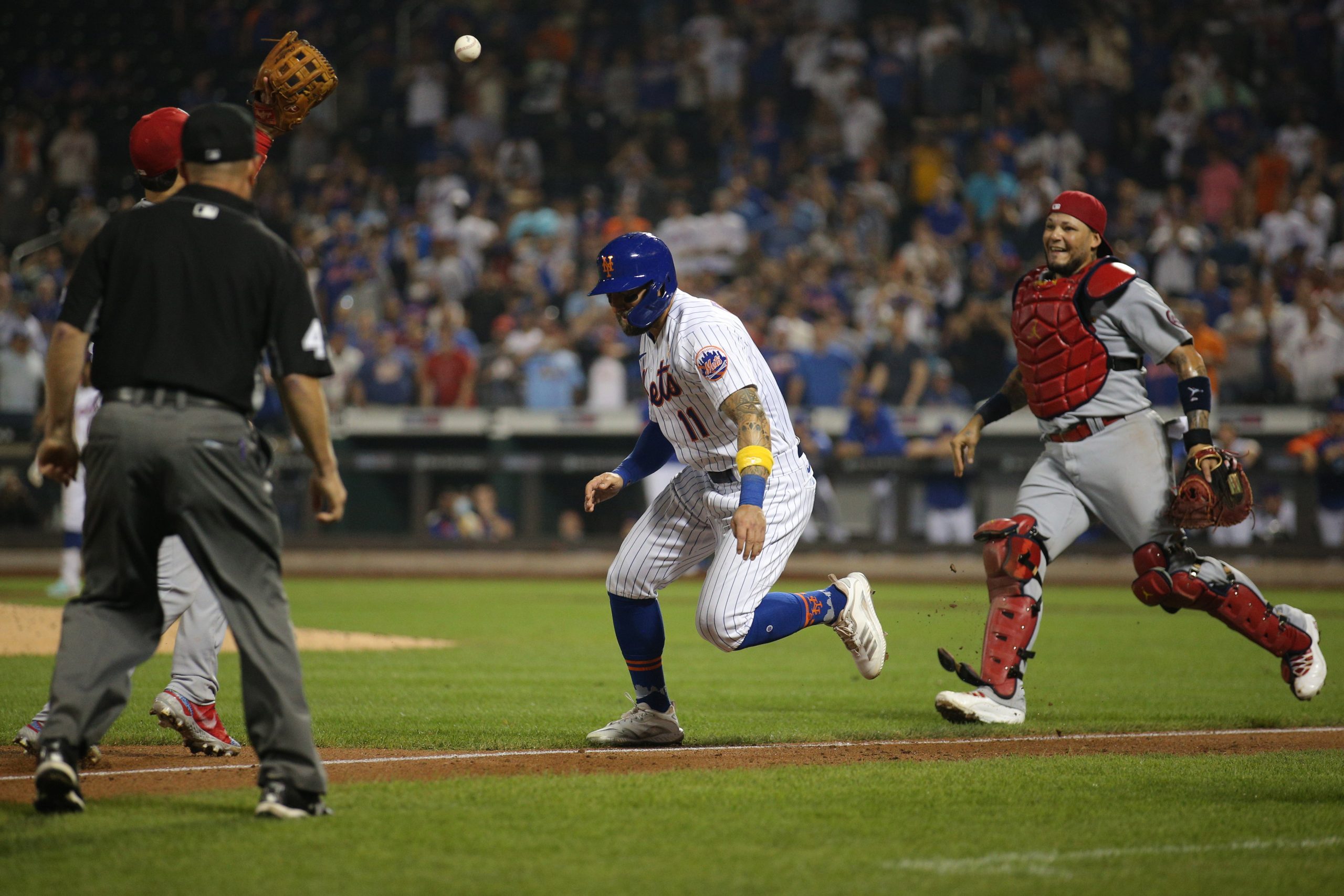 The Braves lost. The Phillies lost. The Reds lost. The Padres lost. The Mets could have gained on all of them in the standings, including the Cardinals who are also directly in front of them by winning this game. In the two biggest spots of the season …

… they relied on Jake Reed and Albert Almora Jr.

Things were looking bleak in the 8th when Jeurys Familia threw the fattest of fat fastballs to Tyler O’Neill which resulted in a two run HR to give the Cardinals a 4-3 lead. But Javy Báez, who reached base five times tonight, brought the house down with a rocket over the orange line in left field off Giovanny Gallegos to tie the game 4-4. It sure as hell seems like Báez, has evidenced by his play, is trying to drag this dead carcass across the finish line by himself. He’s laying off bad pitches, which in turn is making him extremely difficult to pitch against.

Báez even paid tribute to tonight’s premiere of “Once Upon a Time in Queens” by giving the fans a curtain call:

The Mets and Cardinals traded inning ending double plays in the 10th, though not all double plays are created equal. Heath Hembree struck out O’Neill to start the inning, and then smartly walked Nolan Arenado to get to Yadier Molina, who grounded right back to Hembree to start a very conventional double play to end the inning. It set up the Mets for bear in the bottom of the 10th, and when James McCann executed a perfect swinging bunt to get Kevin Pillar to third, it looked like the Mets were going to put this away.

(Editor’s note: It’s impossible to execute a perfect swinging bunt. But it is possible for a ball to start foul and spin fair, which served McCann well. However you get the runner to third is acceptable.)

Then after Jonathan Villar walked, Francisco Lindor came up, hoping to continue his hot streak, and he smacked a ball down the first base line. But Paul Goldschmidt somehow snared the short hop, tagged first base, and threw home to catch Pillar coming down the line. The ensuing rundown lasted one throw as Pillar was tagged out by Nolan Arenado to end the inning. It wasn’t quite Terry Pendleton’s home run off Roger McDowell, but it sure as hell took the air out of the place in a very similar fashion.

Smart Water then introduced the Cardinals to Jake Reed in the 11th. With Seth Lugo unavailable, and having not stretched Marcus Stroman past 89 pitches and Aaron Loup past 7, it was either Trevor Williams or Reed who had just come off the injured list. So Smart Water had a couple of options, and using Jake Reed was certainly one of them. He gave up three runs before Williams came in, who gave up a single but then got Goldschmidt to ground into a double play to end the inning.

Of course, the Mets would battle back to 7-6 in the bottom of the 11th. Pete Alonso doubled home the ghost runner, and then Báez was intentionally walked after he worked the count to 3-0. (Báez walked three times tonight … three!) Then up came Jeff McNeil. I know it’s lefty/lefty, but the 1-0 pitch from Kwang Hyun Kim was a 90 mph fastball on the inner half, and it completely overmatched McNeil. (It’s one pitch out of about 300-600 in this game, but I saw that and thought “man, it just doesn’t take a lot to overmatch McNeil this season.) McNeil would then ground harmlessly to shortstop for the force out, but beat out the double play to keep the Mets alive. Kevin Pillar then tapped to Kim who threw wide to first base to score Alonso and put runners on first and second for Williams’ spot. Smart Water had the .279 hitting Luis Guillorme on the bench, and against lefties in 2021 he’s hitting .276. Rojas also had Albert Almora Jr., who was hitting .118 over all and .150 against lefties.

You guessed it. The slave to righty/lefty matchups went with the .118 hitter on a night where he could have had the Mets gain ground on everyone. He must think that players hitting in the .100’s are more dangerous than they are, pitching to Bryan de la Cruz with first base open and two outs instead of .105 hitter Lewin Diaz, and now going with Almora as the last hope to save the season. Almora, predictably, grounded out meekly to end the game. I really wanted Almora to make Smart Water look … smart, especially after the team came back to set up that final at-bat. But I don’t know how you don’t go with your best options in the middle of September, regardless of dominant hand. I mean, was he saving Guillorme to be a defensive replacement in the 12th? Was he trying to boost Almora’s confidence for the winter league?

The Mets lost nothing in the standings except a day off the calendar, which is as valuable as the games at this point. And here’s the really, really bad part of all of this: The Mets lost two games against the St. Louis Cardinals, and f*cking Paul DeJong had nothing to do with it.