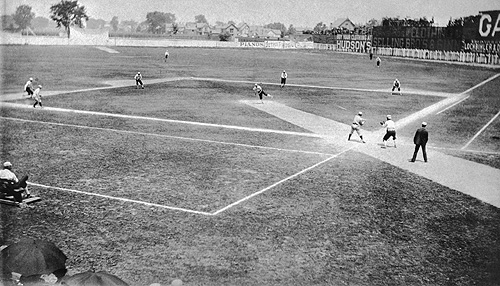 When we last left the 1883 New York Gothams, they had suffered blowout losses in five straight games to close out a dismal eight game road trip in New England.

The club’s bleak record stood at 16-22 and any hopes of getting back in the National League pennant race were quickly fading.

But then the Philadelphia Phillies came to town.

Like the Gothams, the Phillies were also in the first year of their own 135-year history. And just like in 2017, the Phillies of 1883 were a guaranteed cure for any losing streak.

It is not hard to make the case that the 1883 Philadelphia Phillies were the worst team in National League history.

At that time, the Phillies had just a few talented hitters: namely catcher Emil Gross, whose 158 OPS+ led the club, and outfielder Jack Manning, whose 108 OPS+ matched his career mark.

Overall though, the Phillies offense was the NL’s worst, scoring a league low 437 runs, good for 4.41 per game in a league that averaged 5.78 runs per game.

But what made the Phillies truly terrible was their unfathomably bad defense. The aforementioned Emile Gross would finish the year with a preposterous .789 fielding percentage; including 74 errors and 67 passed balls in 55 games!

The porous Philadelphians allowed a staggering average of 8.96 (!) runs a game (earned and unearned), and racked up a .553 defensive efficiency rating, the National League’s all-time worst mark.

Bearing the brunt of the punishment on the mound for the Phillies, was rookie righthander John Coleman.

Coleman was a talented pitcher stuck in a hopeless situation. He took the ball nearly every day for Philadelphia, starting 61 of the club’s 98 games and racking up a staggering 538.1 innings.

Each of those numbers still stands proudly in the annals of futility as all-time MLB records, and will be much harder to break than Joe DiMaggio’s 1941 56-game hitting streak.

But analytics tell a different story about John Coleman’s ability.

While his ERA+ was a dismal +63, he managed to record a 3.34 FIP, a mark good for 12th in the league, and ahead of the Gothams’ own number one starter “Smiling” Mickey Welch who finished the year with a 3.38 FIP.

The Gothams opened their series at home with the Phillies on June 29, 1883.

On the strength of centre fielder John Ward’s two home runs, the Gothams took a thrilling 7-6, 10 inning victory over the hard luck Coleman and his Phillie teammates.

The team then traveled to Philadelphia’s Recreation Park, at Columbia Avenue and North 24th Street, for a June 30th game in which Tip O’Neill eked out an 8-6 victory.

Welch outmatched Coleman on July 2nd in Philadelphia, garnering another 7-6 victory. Tip O’Neill took the mound again for the final game of the series back in New York on July 3rd.

O’Neill struggled, but the Gothams’ offense teed off on the dismal deliveries of Phillies righthander Art Hagan and closed out the series sweep with an 11-8 victory.

Despite the 4-game sweep, the Gothams’ record remained under .500, with a 20-22 record. Even more disconcerting was the underwhelming pitching of both Welch and O’Neill. The club allowed a stunning 26 runs in four games to the league’s worst offense.

If the New York Gothams were going to move up in the NL standings, they needed to either somehow solve their pitching woes, or simply play against the Phillies every game.