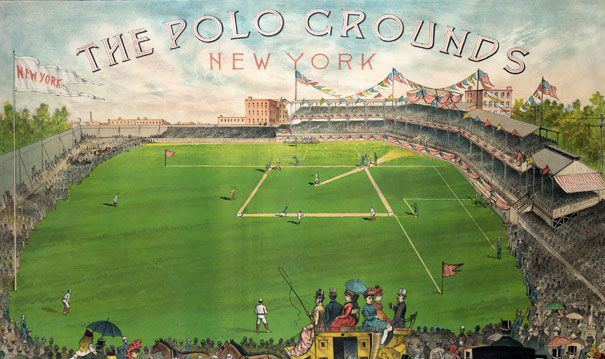 Last week, we discussed the first game in the history of the Giants baseball franchise. That was May 1, 1883, and the New York Gothams began their history on a high note with a 7 to 5 victory over the Boston Beaneaters.

On May 2nd, in front of 3,000 fans at the famed Polo Grounds in Harlem, right hander Johnny Ward took the mound against Beaneaters ace “Grasshopper” Jim Whitney.

Johnny showed up beautifully and matched Grasshopper Jim pitch for pitch through eight hard fought innings. With the score 2-2 in the top of the ninth, with two outs and a man on third base, Ward made a spectacular stop of catcher Mike Hines’ liner up the middle. Ward threw him out in a close play at first to end the inning and keep the game deadlocked as the Gothams came to bat in the bottom of the ninth.

Catcher and team captain Buck Ewing popped up to third base to make the first out. First baseman Roger Connor, baseball’s all-time home run leader before Babe Ruth, hit a long drive and was foolishly thrown out at home plate trying for an inside the park home run. This brought pitcher Johnny Ward up to the plate.

With two out in a tie game, he was in control of his own destiny.

It was hero time and Ward came through, delivering a long extra base hit to the same part of the outfield as Connor’s blast.

But in contrast to the slow-footed Connor, the New York Times noted about Ward, “the little pitcher being one of the best runners in the country… easily made four bases, winning the game.”

Ward’s performance was truly remarkable. He pitched a complete game allowing only two runs to a strong Boston lineup. He also made a game saving defensive play and then hit the game winning home run in the bottom of the ninth inning.

On May 3rd, the Gothams put “Smiling” Mickey Welch on the mound to face Boston in the final game of their series. And this would end up being Ward’s day once again.

Because baseball in 1883 was quite a bit different and managers seemingly hated pitchers and wanted to murder them, “Grasshopper Jim” was on the mound for a third straight start for the Beaneaters. He would go on to pitch 514 innings that year and win 37 games.

“Smiling” Mickey wasn’t smiling very long because he never made it out of the fourth inning. With the Gothams down 6 to 1, Welch was put in center field and in his place Johnny Ward, yesterday’s hero, was moved from center field back to the mound to relieve Welch.

Johnny stopped the bleeding and got out of the inning. In the bottom of the fourth, he hit a home run to close the gap to 6-2. The Gothams continued to rally and finally tied the score in the sixth inning. Ward relinquished the lead in the seventh on a wild pitch, but redeemed himself with his second home run of the day in the bottom of the seventh.

Hitting two home runs in one game was highly unusual in baseball at the time. To put into context how rare home runs were in 1883, Gotham’s catcher Buck Ewing would end the season leading the National League with 10 round trippers.

Ward would finish the season with a career high seven homers on the year.

Johnny held down the fort heading into the ninth. The score was tied 9-9 as the Gothams came to bat in the bottom of the ninth.

Connor led off the inning with a walk, and the superhuman Johnny Ward reached first base on an error by pitcher Whitney. With runners on first and second, left fielder Pat Gillespie hit into a force play and Connor was forced out at third. Yet somehow (probably a Jedi mind trick) Ward was able to reach third base safely on the same play.

Up to the plate stepped player-manager John Clapp, who promptly singled to right field, bringing home Ward with the game winning run and a sweep of the strong Beaneaters club.

After three games the Gothams were 3-0, and Johnny Ward looked like the best baseball player in human history. Ward and the Gothams soon fell to earth as they were swept convincingly by the curmudgeonly Old Hoss Radbourn and the Providence Grays. As the first week in their franchise history closed, the Gothams were now 3 and 3, good for third place in the National League.

MVP for the week of May 2 to May 8: Johnny Ward

We talked a bit about Ward last week and his time as a pitching prodigy for the Providence Grays, but I wanted to elaborate on Ward’s role as a singular force and remarkably important figure in baseball history.

Ward began his Major League career in July 1878 when he signed with the Providence Grays of the National League. Just 18 years old in his rookie year, he had a league leading 1.51 ERA and went 22-13.

In 1879, Ward won an unbelievable 47 games and led the league in strikeouts. He followed that in 1880 with 39 wins, a 1.74 ERA, a league leading eight shutouts, and major league baseball’s second ever perfect game.

He signed with the newly formed Gothams for the 1883 season to share the mound duties with “Smiling” Mickey Welch and Tip O’Neill (Canada’s first great baseball player and 1887 triple crown winning hitter).

Ward’s career was in transition though, as arm problems were increasingly forcing him into the outfield and eventually to shortstop.

But in the second half of the 1880’s, Ward became baseball’s most interesting man.

As the star shortstop and manager of the New York Giants (formally the Gothams), Johnny Ward would lead the team to back-to-back pennants in 1888 and 1889.

He also completed law school at Columbia University and set up the first ever players’ union in 1885.

In 1890, he founded the Players’ League, a rival major league with a focus on players’ rights. Ward retired at 34 in 1894, still at the top of his game, in order to continue his law career. He nearly became National League president in 1909 and later served as president and part-owner of the Boston Braves.

In 1964, Johnny Ward was elected to the Baseball Hall of Fame, a much overdue honor for one of baseball’s great pioneers.

He was Derek Jeter before Derek Jeter— a superstar shortstop in New York. Except Ward was also a manager, lawyer, labor leader, owner, author, and one of the game’s top pitchers.