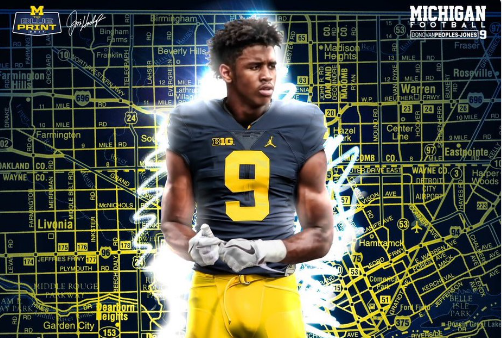 We are just over two weeks away from the start of the 2017 football season with the September 2nd game against Florida at Arlington, TX Stadium. With five returning starters (only one on defense), there will be a lot of new faces in the lineup on both sides of the ball. Jim Harbaugh and company played a lot of true freshmen last year as a part of their rotations so I would expect the same this year as the coach makes every practice, drill, and scrimmage about competing for playing time. While they have a number of upperclassmen returning who played significant roles last year and will be a big part this year (Speight, Isaac, Evans, Higdon, Bredeson, Cole and Onwenu on offense and Gary, Hurst, Mone, Winovich, McCray and Bush on defense) there should be a lot of new faces playing key roles this year so let’s look at three of them on each side of the ball.

While the debate continues about who will be under center when the season begins, there is no question that with the departure of Amara Darboh and Jehu Chesson at wide receiver, the Wolverines have big shoes to fill there. With Grant Perry being fully reinstated after his legal issues from 2016 and Eddie McDoom having another year of experience under his belt, there will be targets for the quarterback to look for but with the amazing wideout haul brought in with the 2017 class, the drop-off should be minimal. Look for Donovan Peoples-Jones (a five-star recruit out of Detroit Cass Tech) and Tarik Black (a four-star recruit out of Connecticut) and Nico Collins (a four star recruit out of Alabama) to quickly fill the holes left behind. Look for Collins to be the “sleeper” in this group. At 6’5” with blazing speed, he will provide a big red-zone target for the quarterback to look to and that will only stretch opposing defenses out that much more.

Jake Butt graduated and Devin Asiasi transferred to UCLA but Michigan had Tyrone Wheatley Jr. and Ian Bunting see time last year so both could see extensive time on the field at tight end. Wheatley has lost weight from the end of last season and Bunting is probably the best blocking tight end on the team but there is a newcomer in the mix that I think will turn heads. The player that sticks out in my mind (and anyone who watched his long touchdown in the spring game) is converted quarterback Zach Gentry. He has great size at 6’5” and 245 lbs., is athletic and deceptively fast. While he’ll need to get more polished on his route-running and blocking, the overall athleticism of this young man cannot be overlooked. He hasn’t even been in this position for a full season but for a kid who played quarterback his entire pre-college career, I expect him to pick up the nuances quickly.

Michigan’s offensive line graduated three starters from last year’s squad and will likely be without the services of Grant Newsome who missed the last nine games of the season in 2016 with a severe knee injury that nearly cost him his leg. Mason Cole and Ben Bredeson return as starters and Michael Onwenu and Juwann Bushell-Beatty bring back a lot of game time experience. Michigan is bringing in some top recruits as they attempt to fill the cupboards again but one of them will stand out this year. Cesar Ruiz (a four-star recruit from Florida) was the number one rated center in the 2016 class and at 6’3” 320 lbs., he has a college-ready body and should play right away. I expect Tim Drevno and Greg Frey to move Mason Cole over to the right guard spot and insert Ruiz at the center spot starting the first game where he’ll stay until the 2021 NFL Draft. On the defensive side of the ball, Michigan will need to replace 10-11 starters from one of the top defenses in college football during the 2016 season. The defensive line is expected to dominate opponents with the return of Maurice Hurst, Rashan Gary, Bryan Mone and rush-specialist Chase Winovich, but the Wolverines added the top-rated defensive tackle in the country when Aubrey Solomon (a five-star recruit out of Georgia) signed with Michigan over all the SEC teams that thought they had him wrapped up. Like number one rated Rashan Gary when he came into the 2016 season, Solomon is expected to get a lot of minutes in the defensive line rotation. At 6’3”, 310 lbs., he comes in with power and speed rarely seen out of a young man this size, and I expect that you’ll be seeing and hearing a lot of him early in the season. With Jourdan Lewis, Channing Stribling, Delano Hill, and Dymonte Thomas all graduating from last year’s secondary, Michigan has some big holes to fill and hopes the superb DL will give them time to grow up quickly.  Tyree Kinnell and Brandon Watson both had extensive playing time in the secondary in 2016 and Lavert Hill also showed promise in a limited role. Benjamin St-Juste was one of the 2017 recruits who came in as an early enrollee and will vie for a job but Ambry Thomas (a four-star recruit out of Detroit Martin Luther King) is the top corner in this class and early news out of camp has him vying for a starting role. He spent his high school years covering Donovan Peoples-Jones so he’s already seen the type of athlete he’ll be lining up against this year. Thomas has blazing speed to go along with tremendous athleticism. Though he’s listed at just under 6’, Jourdan Lewis was only 5’10” and how did that turn out?

One of the big spots to fill is the Viper position vacated by Jabril Peppers. While Peppers was an outstanding athlete with speed, instinct and an insane ability to close in on a runner, he made a lot of headlines for his punt/kick returns and time spent in the offensive backfield. The player being highly-touted to fill that role is sophomore Khaleke Hudson, a 5’11”, 205 lbs. former three-star recruit out of Pennsylvania. He saw some playing time last year in the secondary but he has the same size and (some would argue) speed as Peppers. He is rumored to be a much bigger hitter than the Brown’s number one draft pick. The word out of fall camp is that Hudson, more than any player on either side of the ball, has really brought the “wow factor” to the field.

As the new season begins, we’ll see just how many of these players make an impact. With the exception of a couple of players left over from the Hoke era, this team is now stocked with Harbaugh’s recruits and the daily competition is expected for playing time whether they’re a Freshman or fifth-year Senior.  Schools like Alabama and ohio regularly lose multiple players and just retool for the following year to compete for a National Championship. If Harbaugh is the coach we think he is, I would expect the same thing out of Team #138.