The Greatest Packers Ever to Wear Numbers 41-45 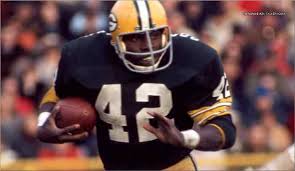 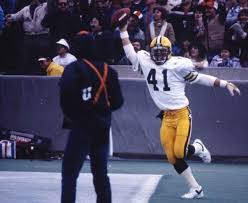 The Packers drafted safety Tom Flynn in the fifth round of the 1984 NFL Draft. The former University of Pittsburgh star became an immediate starter for Forrest Gregg’s club and made a huge impact as a rookie.

Flynn intercepted nine passes in his first season to lead the NFC. His best game came in Week 9 against the Lions when he intercepted three passes in Green Bay’s 41-9 win over Detroit.

Flynn also returned punts for the Packers in 1984, averaging 8.5 yards per return. He was named Pro Football Weekly’s Defensive Rookie of the Year and named to the NFL’s All-Rookie Team.

Unfortunately for Flynn, he was never able to maintain the high standards of his rookie season. He intercepted only one pass in 1985 and another in 1986 but Gregg decided to release Flynn midway through the 1986 season.

The New York Giants signed Flynn and he came back to haunt the Packers, returning a blocked punt for a touchdown against them in the 1986 season finale. Flynn won a Super Bowl ring playing mostly special teams with the Giants.

Other notable Packers to wear number 41 include veteran safety Eugene Robinson who made some big plays for the Packers in 1996 and 1997 including a key interception in the 1997 NFC Championship Game against San Francisco. 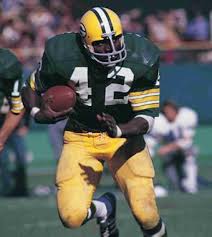 John Brockington was a dominant running back for the Packers in the early 1970s. The Pack selected Brockington in the first round of the 1971 NFL Draft out of Ohio State.

The Brooklyn native was a tough, physical runner who was also a good blocker and receiver. He quickly became the focal point of the Green Bay offense.

Brockington became the first player in NFL history to gain 1,000 or more yards in each of his first three seasons. He was named the NFL’s Rookie of the Year in 1971 and was selected to three straight Pro Bowls from 1971-73.

In 1972, Brockington teamed with MacArthur Lane to give the Packers one of the best running games in the NFL. The Pack finished the season 10-4 and won their only division title of the 70s that season.

Brockington finished his career as the Packers second all-time leading rusher behind only Jim Taylor. He finished his time in Green Bay with 5,024 yards and 29 rushing touchdowns. He led the Packers in rushing yards for five consecutive seasons and was the team’s leading receiver as well in 1974.

Brockington was inducted into the Packers Hall of Fame in 1984. 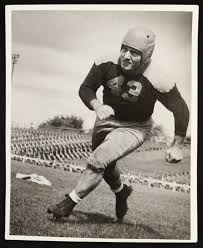 “Buckets” Goldenberg spent 13 seasons with the Packers from 1933 till 1945. Early in his career, he played back for the Packers and carried the football frequently. He later mostly played guard.

Like most players of his era, he played both offense and defense and was known as a strong blitzer defensively. In fact, Goldenberg is credited with helping to create the draw play as Bears quarterback Sid Luckman would hand off to protect himself against Goldenberg’s blitzing.

In the offseason, Goldenberg was a professional wrestler. He later opened several restaurants and served on the Packers Board of Directors after retiring from football.

Other prominent Packers to wear 43 include Doug Hart DB (1964-71) who provided the Packers with strong secondary play for eight seasons including the Packers three straight championship teams of 1965-67. 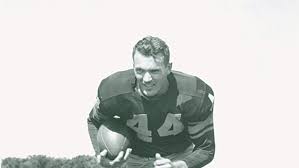 Bobby Dillon spent eight seasons playing defensive back for the Packers and is the franchise’s all-time interceptions leader with 52. Amazingly enough, Dillon played his entire NFL career with a glass eye after a childhood accident.

Dillon was a four-time All-Pro and was selected to four Pro Bowls. Three times he intercepted nine passes in a season in 1953, 1955 and 1957 and those were 12-game seasons. He also returned five passes for touchdowns during his Packers career.

Dillon led the Packers in interceptions seven times in his eight years with the club. His best game came on November 26, 1953, when he intercepted four passes in one game against the then NFL champion Detroit Lions.

Although he was a standout player for the Packers throughout his career, the team had a winning record only once in his eight seasons and that was his final year of 1959 which was Vince Lombardi’s first year as coach of the team. 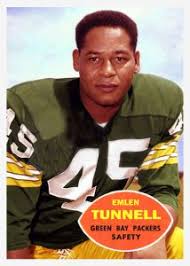 Vince Lombardi brought veteran defensive back Emlen Tunnell to Green Bay from the New York Giants when he became coach and general manager in 1959. Tunnell was brought in to help give his experience to the Packers young secondary. He played three seasons with the Packers, starting 25 games and was named to the Pro Bowl in 1959.

Lombardi also brought Tunnell to Green Bay to help make it easier to recruit more African American players to the Packers who played in a city with almost no African American residents at the time.

He was also able to help the rest of the Packers team adjust to the difficult style of Lombardi’s coaching.

“Em had been through the wars with Coach Lombardi,” Jerry Kramer later told the New York Times. “When coach would be screaming at us, most of us would be looking at our shoes. Em was looking coach in the eye. He knew that Lombardi’s yelling was half performance and half message, and he knew which half was which.”

Tunnell’s last NFL game was the Packers 37-0 win over the Giants in the 1961 NFL Championship Game, the first title they won under Lombardi.

He retired as the NFL’s all-time interception leader. He was inducted into the Pro Football Hall of Fame in 1967, the first African American player to be inducted. After retiring, he served as scout for both the Packers and Giants and later as an assistant coach for the Giants.