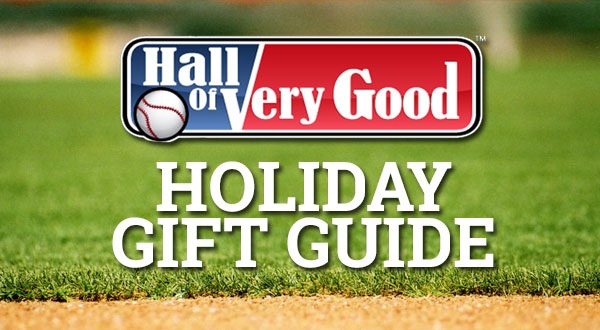 We’re inching closer and closer to Christmas and while you’re waiting, fingers crossed, to see if Giancarlo Stanton or Shohei Ohtani will end up in your favorite team’s stocking…you still have some shopping to do.

So, with that in mind, here are some last-minute gift ideas that won’t cost you an insane posting fee.

Wherever Ohtani ends up signing (Seattle, San Francisco…Chicago?), his jersey is going to be in high demand. For fifty bucks, you can be the coolest guy in the stands with your own Hokkaido Nippon-Hamfighters jersey. That’s right…you can say you were a fan of Ohtani before anyone else.

ANYTHING from Team Brown Apparel

The coolest thing about Team Brown Apparel’s extensive line of shirts, hats and what not is their unprecedented affiliation with both the Negro Leagues and the AAGPBL. Even better is their support of The HOVG Podcast. Use promo code HOVG at checkout and get 25% off your purchase.

Rollie Fingers and his fantastic lip sweater on a t-shirt? Yum.

On their way to the World Series, the Houston Astros turned into the “Wooston” Astros. Now you can style and profile in this one of a kind tee.

The Hall of Very Good™ “The Cobra” Shirt [Zazzle]

Earlier this year, we inducted Dave Parker into The Hall of Very Good. Show your support by proudly wearing “The Cobra” across your chest. Click the link…there is other HOVG merch available too!

Fantasy Life: Baseball and the American Dream by Tabitha Soren

Former MTV News anchor Tabitha Soren started photographing a group of Oakland A’s draft picks in 2002. For 15 years, she followed their every move…both on and off the field.

The Cooperstown Casebook: Who’s in the Baseball Hall of Fame, Who Should Be In, and Who Should Pack Their Plaques by Jay Jaffe

If Jay Jaffe is good enough to join our buddy Jeff Katz on his porch in Cooperstown…he’s good enough to get your money this holiday season. Jokes aside, check out this book!

An awesome take on Charlie Finley’s stint as owner of the Oakland A’s. And, yeah…all those mustaches!

Since forever, Ty Cobb has arguably been the most controversial player to ever hit the diamond…but is it warranted? In A Terrible Beauty, Charles Leerhsen does his best to separate fact from fiction.

Papi: My Story by David Ortiz

I love David Ortiz. What more can I say?

Get Up: The Art of Perseverance by Adam Greenberg

On July 9th, 2005, Adam Greenberg stepped into the batter’s box for the first time. One 92 mile-an-hour fastball to the head later…and his dream was over. Or was it?

For two nights back in August 2016, Hall of Fame rockers Pearl Jam put on a pair of outstanding shows at Chicago’s historic Wrigley Field. Thankfully, it was all documented by legendary rock photographer Danny Clinch. Oh…and you can get the thing on vinyl or CD as well.

Out of the Park Baseball 18

Still, hands down, the best baseball strategy game ever made. Ever.

2017 marked the 25th anniversary of “A League of Their Own”. To celebrate the movie’s release, the International Women’s Baseball Center is offering up a bobblehead of everyone’s favorite fictitious Rockford Peach.

A wallet made out of an old baseball glove? Yes, please.

A wallet made out of an old uniform? Yes, please.

Lastly, if you’re into baseball art at all, our friends from Gypsy Oak, Ballpark Blueprints, Prinstant Replays and Baseball Card Vandals continue to not disappoint. I can guarantee that you will be more than happy with whatever you find there.