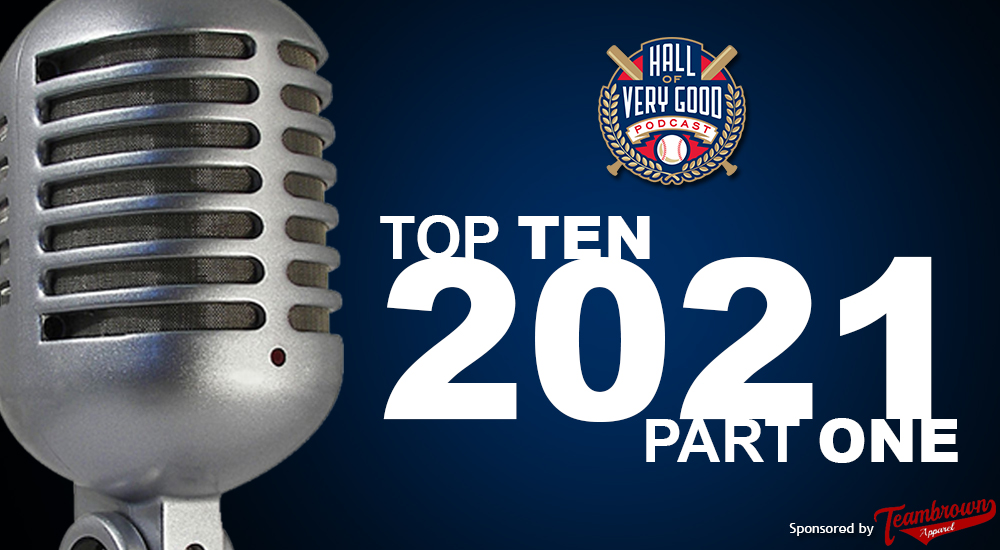 It seems like just yesterday that 2020 was put in our collective rearview mirrors. But now, it’s time to put 2021 to rest.

From Cooperstown, New York, to the cornfields of Dyersville, Iowa…Great Britain to Japan.
52 weeks of The Hall of Very Good Podcast.

Along the way, we lost a legend, looked back a team full of them and celebrated Episode Number 300 in grand fashion.

So what do you call a year that began with a former Negro Leagues pitcher and ended with Buck O’Neil making the National Baseball Hall of Fame?

And if you were curious what the top ten listened to episodes of The Hall of Very Good Podcast were?

For a record eighth time, America’s favorite (former) mayor joins the boys to talk about almost missing the 2021 Hall of Fame Induction, his favorite moment from the recent ceremony, recalls the most memorable Hall of Fame speech he’s heard and that time John Travolta visited Cooperstown.

The newly-minted president of the National Baseball Hall of Fame and Museum joins the boys to talk about his recent cross-country roadtrip from Arizona to New York, stopping off in Dyersville, Iowa, for a game of catch (and historic baseball game!) at the Field of Dreams movie site, whether or not he can be blamed for those Diamondbacks uniforms and if he’s ready for those cold Cooperstown winters.

The co-founder of the Mississippi Sports Hall of Fame and Museum (and big time memorabilia collector!), joins the boys to talk about his massive collection of autographed baseballs, spending time with the likes of Warren Spahn, Vin Scully, Hank Aaron, the New York Mets famed “Million Dollar Outfield” and, of course, those late night trips to IHOP with The Famous San Diego Chicken.

The Hall of Famer joins the boys (twice!) to talk about his favorite baseball movie of all-time (spoiler alert…it’s NOT Field of Dreams), Major League Baseball’s marketing of its current stars, whether or not his former colleague Pete Rose deserves a spot in the Hall of Fame, why Vlad Jr. might have been the story of the year and discovers the bond he shares with Lou.

To help celebrate the 300th episode of the podcast, the legendary broadcaster joins the boys to talk about the three questions he gets asked the most, who he weirdly gets mistaken for, signing autographs as Bob Cutlass, appearing in BASEketball (and Pootie Tang!), that bet he made with Kirby Puckett back in 1986 and, of course, a little baseball.