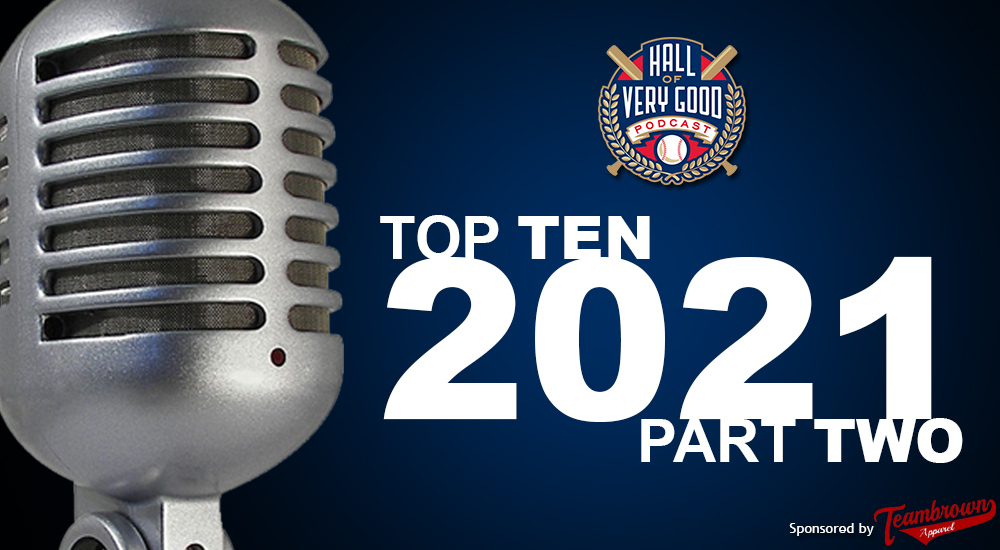 It seems like just yesterday that 2020 was put in our collective rearview mirrors. But now, it’s time to put 2021 to rest.

From Cooperstown, New York, to the cornfields of Dyersville, Iowa…Great Britain to Japan.
52 weeks of The Hall of Very Good Podcast.

Along the way, we lost a legend, looked back a team full of them and celebrated Episode Number 300 in grand fashion.

So what do you call a year that began with a former Negro Leagues pitcher and ended with Buck O’Neil making the National Baseball Hall of Fame?

And if you were curious what the top ten listened to episodes of The Hall of Very Good Podcast were?

The self-proclaimed “David Hasselhoff of the baseball card art community”, joins the boys to talk about growing up in the competitive world of Los Angeles mathletics, his never ending quest for Platinum Elite status at JOANN Fabric, what prompted him to start Heavy J Studios (and how he ended up creating more than 600 pieces of card art for charity!) and, yeah…that time a certain Tiger Beat coverboy might have (but most definitely probably did) made off with a recipe box full of his high-dollar baseball cards.

The longtime broadcaster joins the boys to talk about the “magic device” that enabled him to get back on his feet and how he’s made it his mission to help others do the same, his love of Tommy Harper and the Seattle Pilots, the game he invented with his uncle, his experience making Baseketball and shares his favorite Milwaukee story.

The Once Upon a Time in Queens director joins the boys to talk about growing up a lifelong New York Mets fan, the similarities between their 1986 World Series-winning team and the band Nirvana, who he wishes he could’ve interviewed for his 30 for 30 documentary and, of course, the excitement of showing the world Ed Hearn’s balls.

The former All-American pitcher joins the boys to talk about representing Mexico during the 2020 Olympics, chasing down Pau Gasol (and running into Yao Ming) while in Tokyo, growing up a fan of the Jackass franchise and how she ultimately ended up getting a role alongside Johnny Knoxville and the gang in their upcoming movie.

The renowned master of cue cards joins the boys to talk about how a rejected after school special helped lead to his 30-plus year career working at Saturday Night Live, reveals who is the best (and the notso best) when it comes to reading cue cards, dishes on some of the athletes that make their way backstage and how Carl Yastrzemski ended up his mortal enemy.