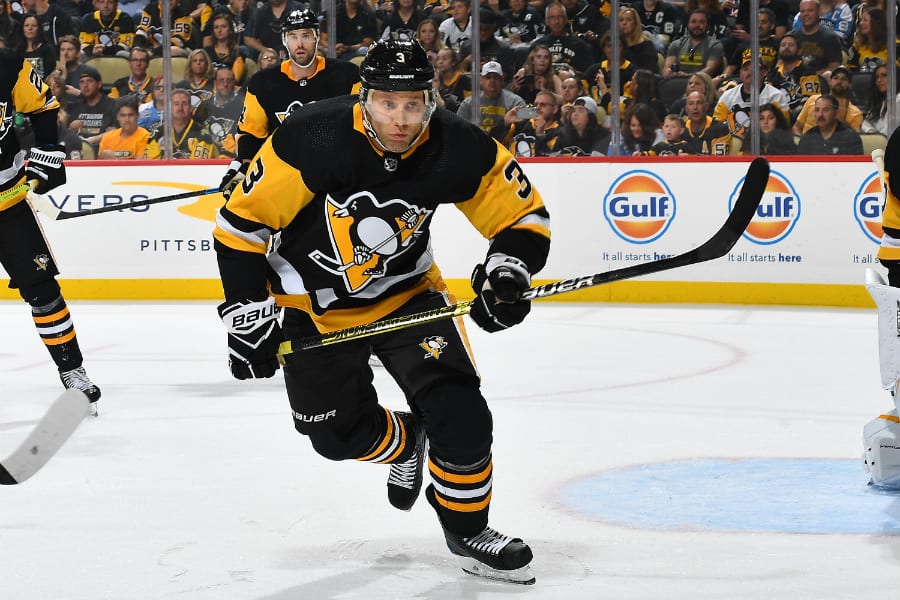 Let’s get something out of the way here so it doesn’t get twisted as “trolling.”

Jack Johnson has been serviceable for the Penguins this season.

We can acknowledge this while also acknowledging that Jack Johnson has also spent his entire career making Hockey Men believe that he was and is a good hockey player.  After all, he exhibits leadership qualities, he’s a great locker room guy, he gives great quotes, and he’s a physical presence.

Of course, almost none of these things have anything to do with being a good hockey player, but that’s neither here nor there.

What is both here and also there is that his first season as a Pittsburgh Penguin was nothing short of abject disaster.

And that’s being nice.

He was a liability on an innumerable amount of occasions, looked like the slowest player on the ice most nights, and neutered Phil Kessel’s and Evgeni Malkin’s ability to be dynamic offensively, with whom he played a substantial amount of time with as the Penguin’s 2nd pairing defenseman.

Don’t believe it?  Let’s take a look, from a very high level (via HockeyViz.com) what Malkin, Kessel, and Johnson all looked like with and without one another last season at 5-on-5 because we’re going somewhere with this.

One thing to keep in mind here is that red means more unblocked shots are being generated in those areas relative to the league average, while blue means fewer.  A positive Threat score in the offensive zone is good, while a positive score in the defensive zone is bad.

With that, let’s check in with Malkin and Johnson first. 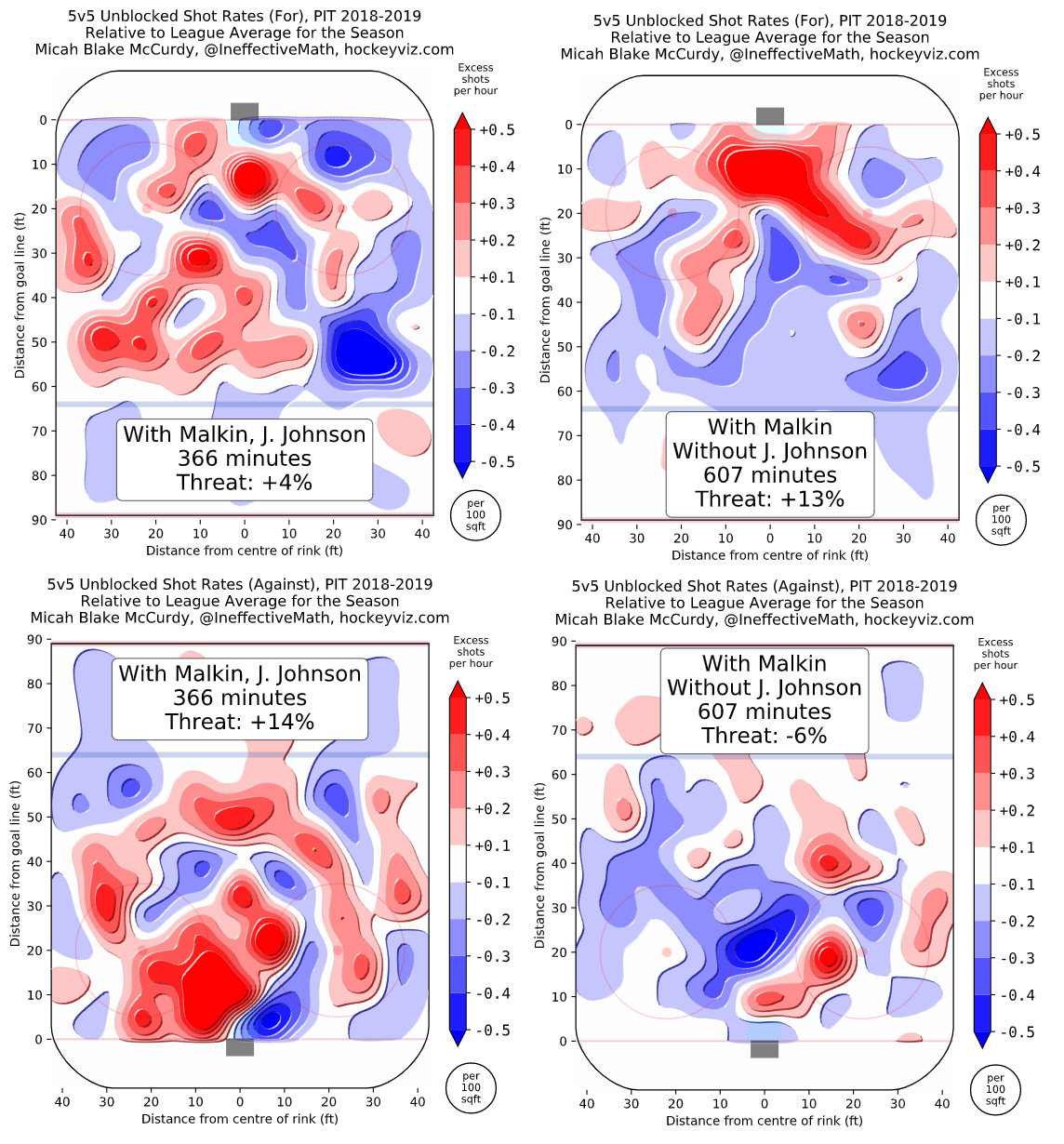 Malkin, at his very core, is always going be a force in the offensive zone.  But when he was on the ice with Johnson last season, that was simply not the case, tracking out to a +4% Threat offensively with Johnson (and limited shots being generated from in close) compared to the +13% Threat away from Johnson, where the Penguins lived in front of their opponents’ goal.

In the defensive zone, the failures are even larger.  The Penguins, with Malkin and Johnson on the ice together, hemorrhaged unblocked attempts from the highest quality areas of the ice relative to that of the league average, amounting to a +14% Threat.  Things tightened up for Malkin and the Penguins defensively when the two were apart, a -6% Threat, where the Penguins gave up very little from the net-front and middle-to-high slot.

These wild swings are evident when examining Kessel and Johnson as well. 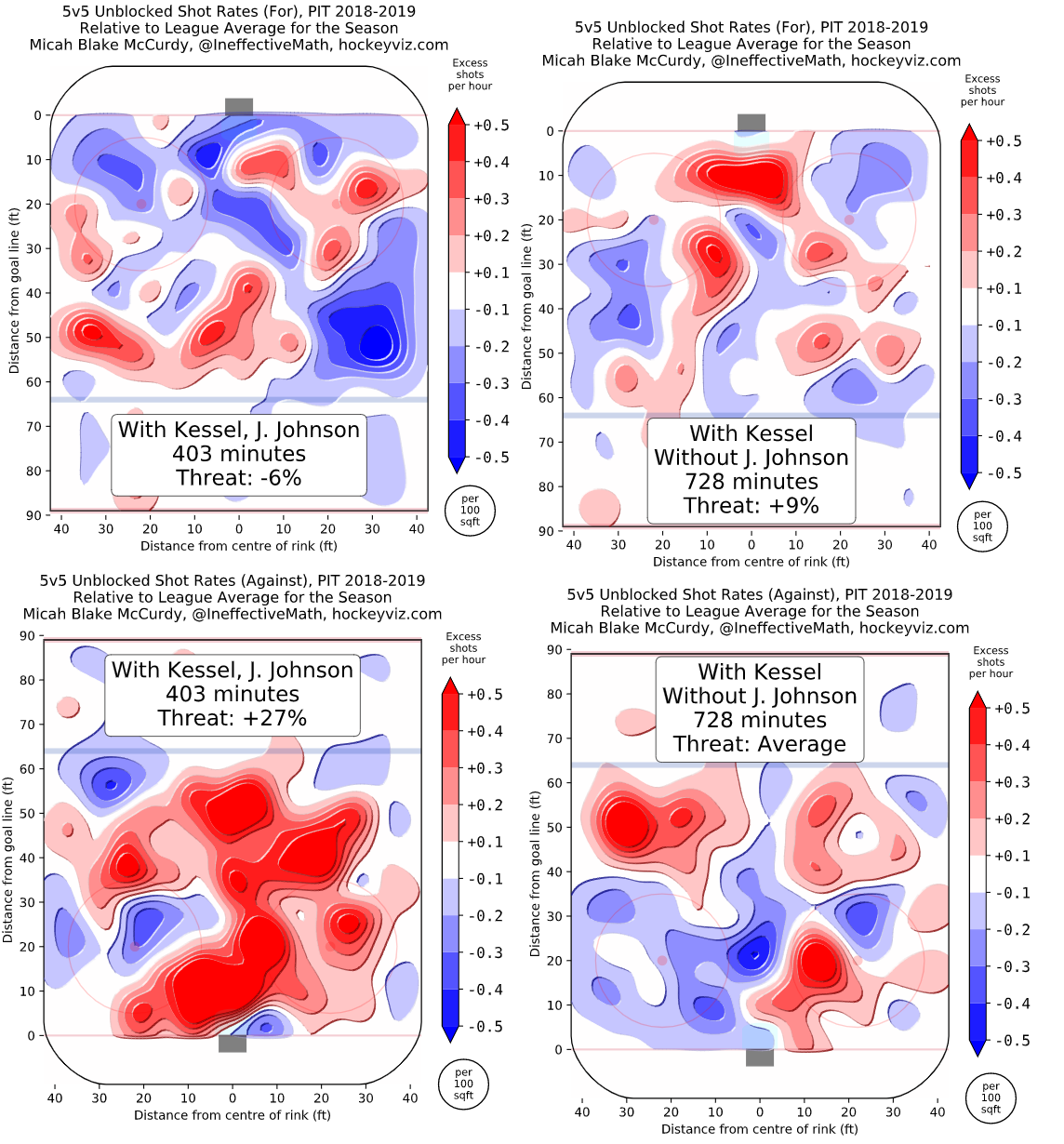 In fact, in Kessel’s case, the Penguins went form a -6% Threat offensively with Kessel and Johnson together to a +9% Threat when Kessel was on the ice without Johnson, again finding substantial success in the low slot.

On the other side of the puck, Kessel and Johnson just did not work.  The Penguins, with these two on the ice, saw an excess of unblocked attempts come in from damn near everywhere in the defensive zone relative to the rest of the league.  Taking Johnson away from Kessel, though, helped the Penguins as they became an average defensive team.

That is not insignificant, particularly for Kessel and his defensive frailties being a big talking point in why he was traded this summer. 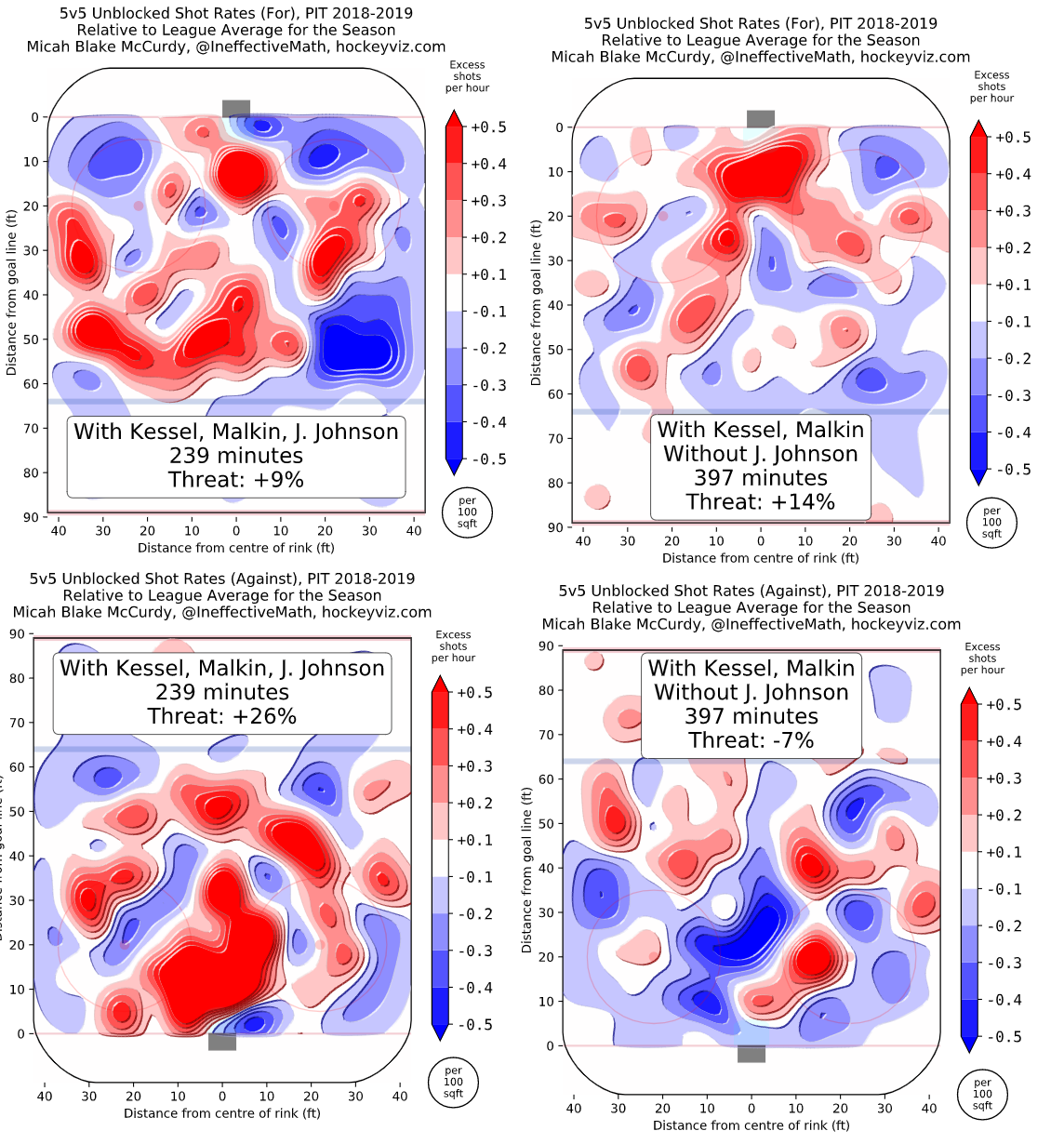 As you’d expect, when Malkin and Kessel were together with and without Johnson, the results are largely the same.

But Jack Johnson has been fine this season, right?

Make no mistake about it.  Jack Johnson has, in fact, been fine this season.  He had a very low bar to clear given his 2018-19 season, but in isolating his impact, you’ll see that he’s been slightly less of a drag on offensive and slightly less of a black hole defensively.

Relatively speaking, those are improvements by any measure.

The answer, of course, comes down to usage.

Usage is, and will always be, the great equalizer in hockey.  More specifically in Johnson’s case, the combination of players that see time with certain other players.

It’s my belief that Mike Sullivan recognized through last season that Jack Johnson was not and is not a 2nd pairing defenseman, struggling to be effective with Sullivan’s 2nd line and, as we saw above, neutralizing their overall impact and demolishing their ability to do what they do best: create offense.

So instead of thrusting Johnson back into that role this season, Sullivan has instead opted to play him with a different set of players.  To wit, he’s actually kept Johnson away from the likes of Sidney Crosby and Evgeni Malkin this season, playing Johnson just 39:52 of 5v5 ice time with Crosby and just 76:37 of 5v5 play with Malkin.

So, by process of elimination, if Johnson isn’t playing with either of the top two lines, it stands to reason that he’s, instead, playing with the bottom two lines.

And that has been the case.

From Sullivan’s perspective here, it makes sense.  Because to deploy Johnson, who is a hindrance when it comes to contributing to offense, with his most talented offensive players (as he did last year), it does the opponents’ jobs for them.  You need only look at Johnson’s isolated impact on offense (-17.2% Threat) above to see that.  But, relative to the rest of the Penguins, it shows up too. 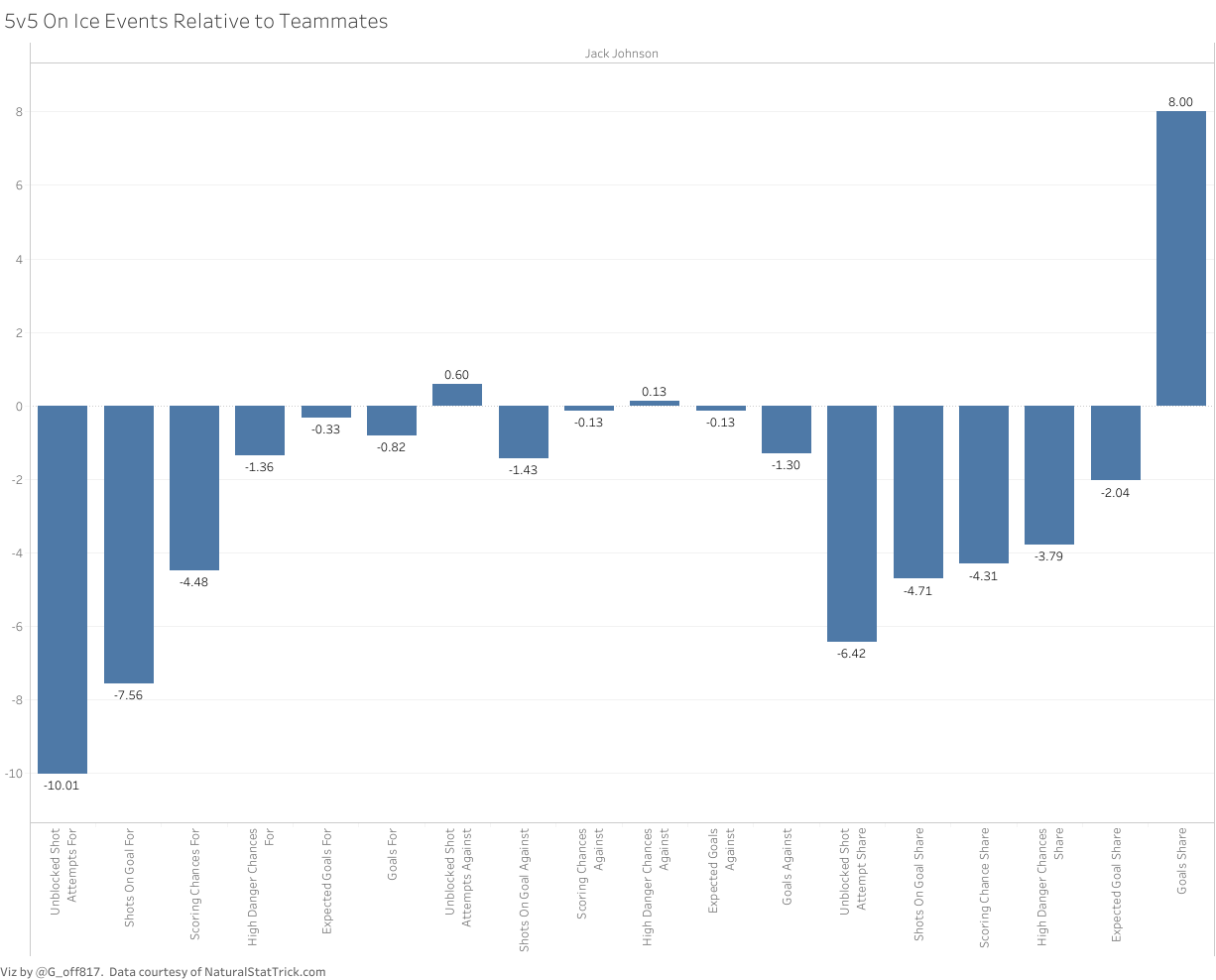 In fact, per hour of 5v5 play, the Penguins generate 10 fewer unblocked shot attempts, 7.56 fewer shots on goal, 4.48 fewer scoring chances, and 1.36 fewer high danger chances with Johnson on the ice versus when he’s off of it.

To adjust for that, Sullivan has chosen to instead deployed Johnson with players whose responsibilities aren’t to create offense, but rather defend properly and neutralize their opponents.

It has unmistakably paid off. 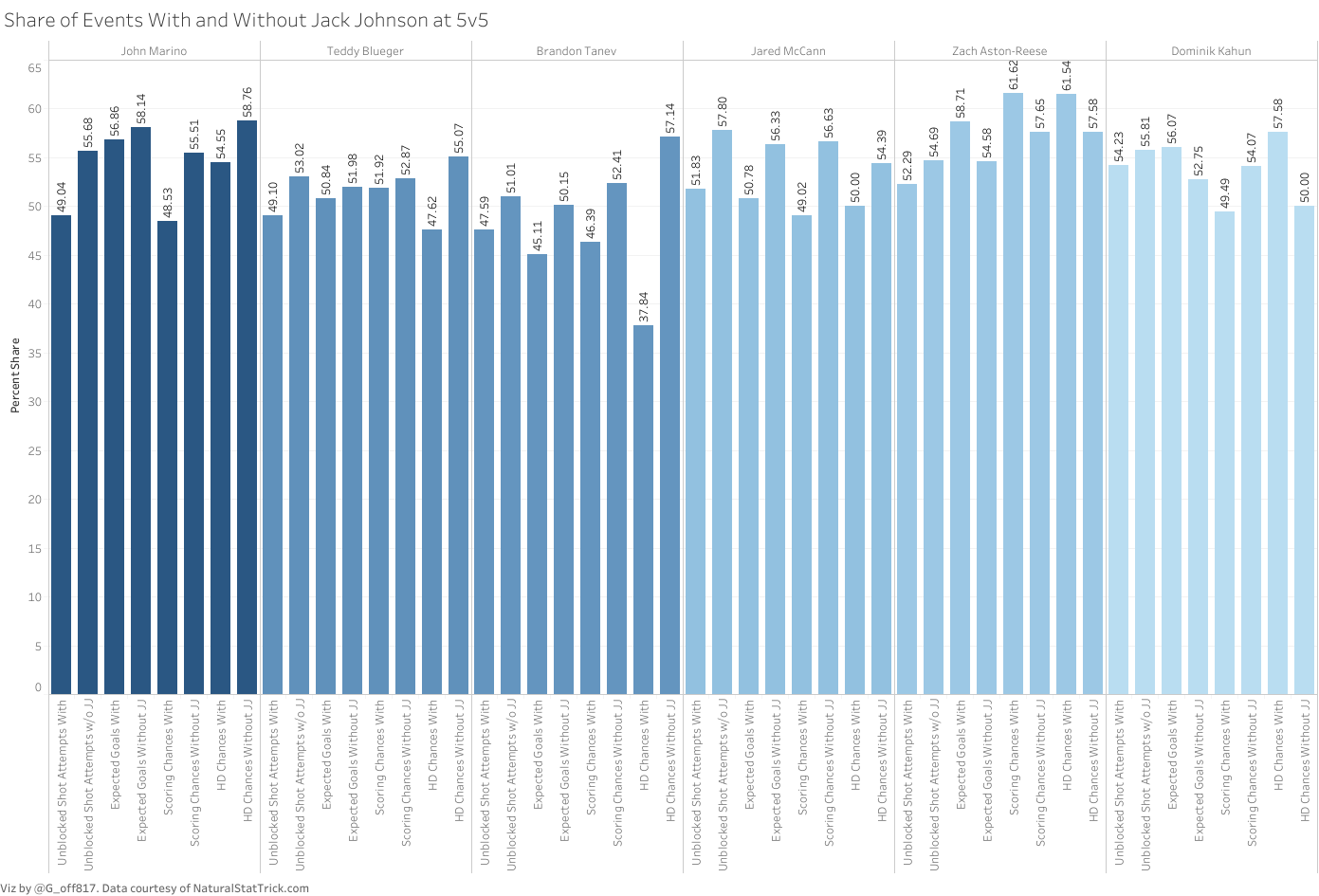 What you see here is the 6 players Johnson has played at least 120 5-on-5 minutes with, starting with 172:40 with John Marino all the way down to 128 with Dominik Kahun.

As far as the forwards go, you’ll notice that the five included here have almost exclusively played on the 3rd and 4th lines for the Penguins.  You’ll also notice that two of them, Jared McCann and Brandon Tanev, have played integral parts in the Penguins team defense resurgence (you can read more about Tanev’s impact here and McCann’s impressive start to the year here).

What you should see here is that these guys, while sharing the ice with Johnson, have not been totally decimated and, with the exception of Tanev, have been at or around the 50% threshold in the share of events that take place.  Of course, you’d expect them to by and large be better away from Johnson than with Johnson and, for the likes of Marino, Blueger, Tanev, and McCann, that is certainly the case.

But the important takeaway is that when Johnson shares the ice with these impressively good suppressors of offense against, he’s kept his head above water.

And let’s be clear.  A lot of credit has to go to Jim Rutherford and his staff for targeting guys like Marino, Tanev, McCann, and Kahun, all of whom systematically and stylistically fit within the Penguins mold and helped transform them into the defensive juggernaut they’ve become this season.

But perhaps no one deserves more credit than Mike Sullivan for taking these players, utilizing their strengths, and helping paper over some cracks that we know (and likely he knows) exist in the Penguins weakest defenseman.

To date, the Penguins have been far better for it.