The KING is here! 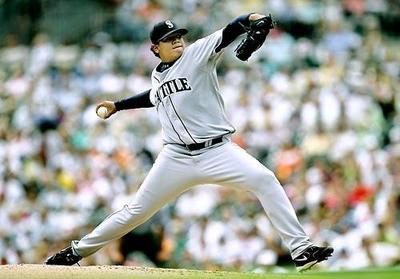 And, it’s not just the stat line. Sure, 5 IP, 3 H, 1 ER, 2 BB, 4 K in 81 pitches is impressive enough against the #3 hitting team in baseball. But, how about this – ZERO fly balls! Are you kidding me?? Even the 3 singles were ground balls that got through. 11 ground outs, zero fly outs. That’s dominating. There is a big write-up out there that talks about how power pitchers that get lots of strike outs and lots of ground outs are great pitchers and become Roger Clemens!

The scary thing was how wild he was most of the game, how much he was up in the zone, yet his stuff was so good, he did something that even veterans still don’t do very often – they are still great when they don’t have their best arsenal.

Even more impressive?? His “makeup” has been talked about that he’s very mature, and he keeps himself under control, etc. Well, first 4 batters in his ML career, the sacks were loaded, 1 run was in, nobody out and Magglio Ordonez was up. The fact that he settled down and went on retire 14 of the last 16 he faced is just flat-out awesome!

Wiki Gonzalez said he wasn’t close to his normal self, yet guys like Detroit’s Brandon Inge said “He had unbelievable stuff, a fastball 97 (mph) with a lot of movement, and on top of that, a good slider,” Tigers third baseman Brandon Inge said. “He kept his composure. We didn’t hit him well. We were fortunate to get a couple of runs off him.”

There are also quotes from Wiki that claim guys like Skinny (formerly Pudge, but have you see his non-roid body??), D-MeatHooks, etc, were all saying under their breath between pitches “this kid has got some serious stuff” or “he can sure pitch”, stuff like that. There was also a story that he dropped a freaky curve ball over for a strike that was called a ball, and that it broke so much it even fooled the ump. Chris Shelton, the batter, stepped out to compose himself, glanced at the dugout for a second and smirked as he shook his head, giving a “WHAT THE HELL WAS THAT!?!” look.

Now here’s something weird though –

A few guys at work bought the game via MLB.com (one guy couldn’t get the game, but one other guy got it to work) and he said the kid’s stuff was just sick. His curve and change are really impressive. I guess he whiffed Guillen on a change that just died halfway to home plate, and he was WAY out in front. It was a sight to behold.

We FINALLY got our ace.