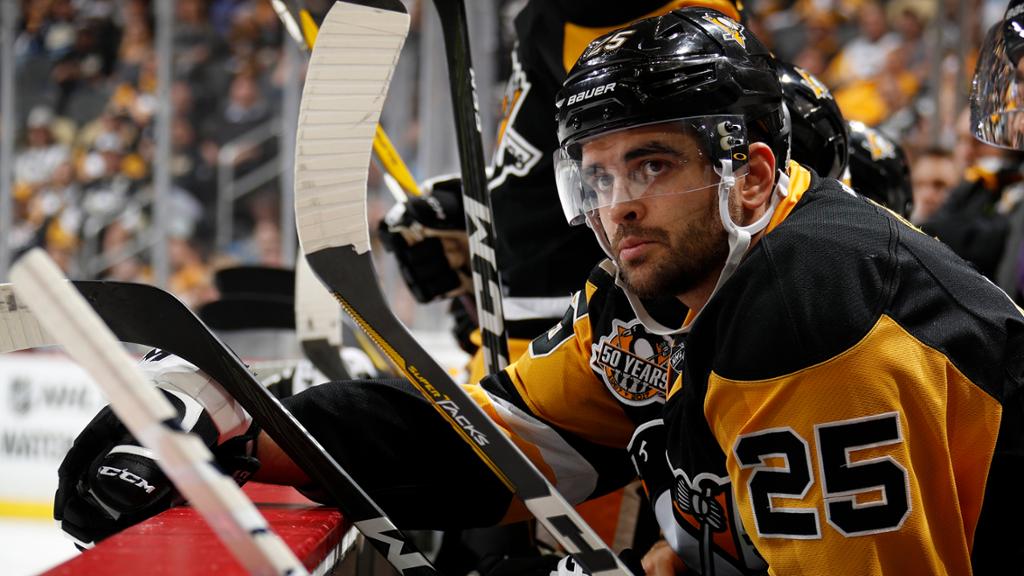 Gather ‘round and let’s have a discussion folks. As you know, it’s March 19th and the Pittsburgh Penguins look more like the Pittsburgh Perguins. No, I’m not saying the defending cup champs aren’t playing well. In fact, in the month of March, they’re a solid 7-2-1. I’ve just taken to calling them the Perguins because they’re missing a literal 1/3 of their team and that’s just at this current moment. The injury bug has taken one hell of a bite out of this team and its kind of ridiculous.

Conor Sheary was hit by a puck on the bench and needed stitches in the March 17th game against the Devils. Mike Sullivan actually said in his in-game interview that the team can’t even keep players healthy when they’re not on the ice. It was a joke but it wasn’t untrue. Even officials aren’t exempt. In the March 19th game against the Panthers, one of the officials was felled for the end of the first period. Hornqvist elbowed him painfully in the back after a weird collision off of the face-off with a member of the Panthers.

Basically, if you can skate, you can and probably will get some form of injury. So the call-ups have come quickly and often. There was Jake Guentzel who was recalled and has been with the team since. There was Oskar Sundqvist, who came up when Cullen and Bonino missed a few games. There’s Carter Rowney, who scored his first NHL goal in his 15th game since being recalled. Archibald, Warsofsky, Gaunce, Pouliot, the list goes on and on.

But no one causes more of a commotion than Tom Sestito. Sestito who, if you recall, racked up 20 penalty minutes in two minutes of playing time in the March 8th game against Winnipeg. Sestito, who was suspended for four games after injuring Toby Enstrom in said game. Sestito who…well why exactly is he in the line-up? There is no such thing as a “code” anymore and winning games is more due to the play of the Penguins top line of Crosby, Sheary, and Guenztel… so what is he doing out there?

That is what we’re here to talk about. Why exactly, is Sestito still dressing for the Pittsburgh Penguins when clearly he isn’t exactly the right fit for them. Well, the answer is kind of easy, all things considered.

Sestito is playing because he is, pardon my brashness, a warm body capable of skating. He is capable of, within reason, not being a complete tire fire when he is on the ice. Since coming back from his suspension, Sestito has managed to be rung up for just two penalty minutes. He even put an assist on the board in the New Jersey game. He might not be ideal, as his abysmal 36% CF underscores, but the other guys are needed in the American Leauge, believe it or not.

The Wilkes-Barre/Scranton Penguins currently lead the American Hockey League in the standings. They haven’t clinched their spot in the Calder Cup Playoffs yet but it will come. They play meaningful games every time they’re out there. And the big club has swiped most, if not all, of their best players. Jake Guentzel? Gone. Carter Rowney? Gone. Matt Murray? He’s gone too. And none of them are going back. So, in order to keep the other team afloat and not risk a young promising player’s playoffs in the AHL with an injury in the NHL since injuries are happening a lot lately, they’re bringing up other guys. Sestito is a tough customer. He was smashed to the ice in the New Jersey game but he’s made of some tough stuff. Besides, as terrible as this sounds…would you rather he or Josh Archibald get injured?

Why was Pouliot called up over Warsofsky? Because Warsofsky is the Wilkes-Barre/Scranton team’s number one defenseman and they really need him for their push to the postseason. Yes, the Pittsburgh team needs to be good but they’re going to make the playoffs and they will get bodies back. Bryan Rust has been skating with the team even if it’s non-contact while Kris Letang and Olli Maatta have been seen working on-ice ahead their teammates. The team just needs to hang in there, and that is what Sestito is doing. Sure I’d love to have seen Archibald stay over him. But sometimes, we have to look at the bigger picture even if that picture means someone we don’t really like is playing on the Pittsburgh Penguins for a few more games.