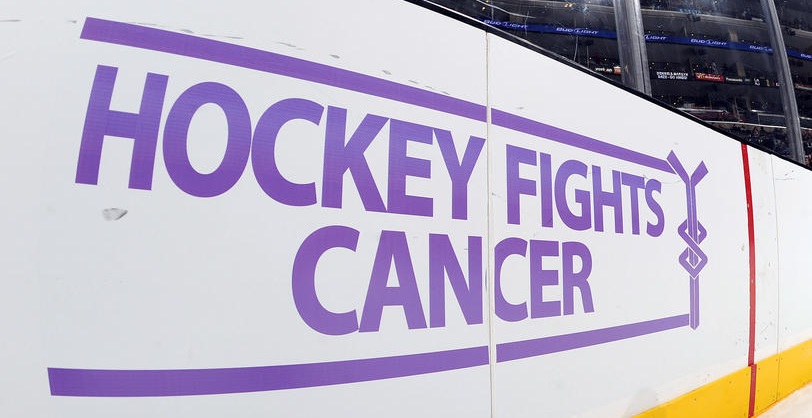 Last month, the Penguins accepted an invitation from the President to visit the White House to celebrate their championship, causing strong reactions from all sides. Many fans wanted Sidney Crosby to speak up about politics and the team to skip the visit while others want hockey to refrain from NFL-style protests. In November, there is one annual cause that everyone, regardless of political affiliation, can agree to support. This month, Hockey Fights Cancer events will occur in all 31 NHL arenas to raise funds and awareness in the battle against cancer. For nearly two decades, the NHL and NHLPA have teamed up with both the American and Canadian Cancer Societies and generated more than $18-million in donations for cancer research, hospitals and patient care initiatives.

We’ve all seen the light purple color representing Hockey Fights Cancer on team logos this past week whether at the arena, on team websites, or on social media. Tomorrow, the Penguins will wear purple jerseys during the morning skate and pregame warmup. The uniforms will later be autographed and auctioned to benefit the Mario Lemieux Foundation and UPMC Hillman Cancer Center. The NHL often refers to former and current players, coaches, officials, broadcasters and front office personnel as members of the “hockey family”. Like any family, the NHL can come face to face with cancer at any time. In the same way that families and friends care for (and often are inspired by) someone who has a cancer diagnosis, the Penguins, over their 50 year history, have seen several examples of courage and perseverance in their family.

Mario Lemieux, of course, fought through radiation treatments for Hodgkin’s lymphoma during his great 1992-93 season and came back to win the scoring title. More recently, moments after hoisting the Stanley Cup for the second time in his career, Crosby passed the trophy to Trevor Daley in San Jose. Unfortunately, Daley’s mother Trudy had end-stage cancer during the spring of 2016. Her last wish was to see her son raise the Cup after 12 seasons in the NHL and Daley was able to fulfil that wish nine days before she passed away.

Current Penguins Phil Kessel and Olli Maatta both battled cancer at a young age and very early in their respective careers. Just 27 games into his NHL career, Kessel, 19, had testicular cancer surgery in December 2006 and missed the next month of the season. He returned in the new year and played all 43 remaining scheduled games with Boston. At season’s end, Kessel became the youngest player to earn the Bill Masterton Trophy, awarded annually to a player who demonstrates perseverance, sportsmanship and dedication to hockey.

When Maatta, 20, was undergoing a routine physical prior to the 2014-15 season, team doctors noticed a lump in his neck. After playing 10 games, Maatta had successful thyroid cancer surgery on November 4 – almost exactly three years ago. Just two weeks later, the defenseman was back on the ice, in game action against Montreal.

In May 1991, Penguins head coach Bob Johnson guided the club to its first ever Stanley Cup. That summer, as he prepared to lead Team USA at the quadrennial Canada Cup best-on-best pre-season tournament, Johnson needed emergency surgery to remove a brain tumor. While the entire hockey family, especially in Pittsburgh, was shocked when he passed away in late November, just a half year after his greatest professional achievement, his legacy will always be one of enthusiasm, an irrepressibly positive attitude and a love for hockey.

Badger Bob is best known in Pittsburgh for his famous quote: “It’s a great day for hockey” – something he truly believed whether mired in a long losing streak or at the cusp of winning the Cup. Finally, Ashley, the two-year old daughter of Penguins goalie Tom Barrasso battled neuroblastoma, a typically pediatric cancer in 1989-90. Ashley received intense treatment including surgery, chemotherapy and a bone marrow transplant. That winter, Barrasso was granted a leave of absence by the organization to care for Ashley. It was one of those moments when the win-at-all-costs mentality took a back seat to simple compassion. “Tom belongs with his family right now,” said GM Craig Patrick. Later, the goaltender established a cancer research fund in his daughter’s name.

Twelve years later, Ashley Barrasso, shortly after receiving treatment for a recurrence of cancer, and Lemieux, together raised the Olympic flame in Pittsburgh during the torch relay leading up to the 2002 Salt Lake City Winter Olympics.

For all the things the NHL does to frustrate its fans, the Hockey Fights Cancer initiative remains one of the more commendable events on the calendar. Here’s hoping that once again this month, the league and its players will use their public exposure to promote awareness, donations and goodwill for the benefit of all cancer patients and their caregivers.