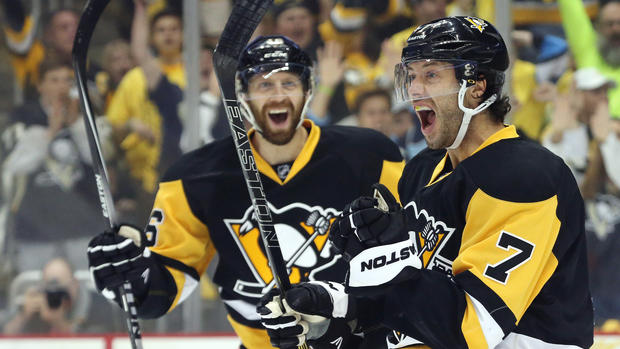 At this time last year, the Penguins had just changed their coach and were playing some of the most frustrating hockey that I’d seen in recent memory. Night after night it would feel like they were doing the right things but couldn’t buy a bounce. Additionally, Marc-Andre Fleury had just been injured and a little fellow by the name of Matt Murray had just arrived on the scene but we were still riding the Jeff Zatkoff goalie train. This year, the Penguins are playing some beautiful hockey but they’re also playing some really nerve-wracking hockey.

They’re showing some signs of cutting down on bleeding shot attempts against in the last handful of games but there are still improvements to be made. So I’ve decided to compile my (I guess now annual?) Penguins Christmas List of things Jim Rutherford ought to be shopping for or asking someone to bring him by divine design.

1. A new home and decent return for Eric Fehr
Eric Fehr has the rest of this season and all of next season remaining on a deal with the Pittsburgh Penguins but the union has been, by and large not ideal. The fourth line has performed, at least of late, better when he’s out of the line-up than when he’s in it. It’s nothing against Fehr who could easily be a serviceable NHL depth forward for a team that plays a less up-tempo style. He’s just not really fitting, much like David Perron last year after Sullivan’s hiring. Additionally, he’s not an extremely expensive player at 2 million and the Scuderi buyout comes off the books at the end of the season as does Dupuis cap hit so perhaps the Penguins could offer to split the deal in half and make it a really easy yes for someone who could use the veteran presence and PK skills.

Now, what would be a fair return for a good locker-room guy who seems to have slowed slightly but still has had effectiveness against certain opponents? A mid-round pick (3-5) or a prospect who is slightly lower on the depth chart (a C level or D) player would be nice. But really it doesn’t matter what they get get as long as it’s something and it’s not paying him to eat press box popcorn long term. Then we can get one of my other Christmas Wish List items in…

2. Jake Guentzel (or Oskar Sundqvist or Dominik Simon)
Part of what made the Penguins so great last year was the internal battle once people started getting healthy. Rust, Sheary, even Wilson and Sundqvist were all jockeying for playing time and game spots. If the Penguins move Fehr they’ve got more flexibility to build this kind of competition again. Case in point, when Guentzel came up it seemed to light a fire under Wilson. Not long after, Wilson ramped up his play and he’s been more effective since then than he was earlier in the season.

And they don’t have to do it all at once. They can use a method similar to what they did with Sheary and Sundqvist last year. They can bring Guentzel in for a week try to get him some ice and then if not send him back but the best forward acquisition the Penguins can likely make right now is just an internal move for one of the three guys who are playing exceptionally in the AHL right now. There’s also the matter of a player everyone seems to have forgotten exists, Daniel Sprong, who could easily slot in and add more internal competition and speed to the line-up.

3. A return to form from any of their struggling blueliners
A lot of people want to go out and get new defensemen or try to fix with external parts. And sure, that was what needed to be done on the blue line last year because Rob Scuderi was not going to cut it. However, the main issue right now is that three of the Penguins six defenders are performing below their water-marks. But trading away young players seems like a poor move that Jim Rutherford learned from after Simon Despres. And the problem could easily solve itself if even one of Brian Dumoulin, Trevor Daley or Olli Maatta returns to form.

And there’s nothing to say that can’t happen. Remember this time last year? Ian Cole was practically a piece of furniture in the press box because he didn’t play for so long. He struggled mightily early last year and I was even putting him on the trade block but he looks like a new man now. I’m apt to be patient especially when one considers who these defensemen are that are under performing. Dumoulin is probably exhausted from going from the AHL to the top pairing seemingly overnight. Daley is returning from a broken foot and his mobility is a huge part of his game. Maatta has played one full NHL season, 2013-2014, without injury in which time he’s supposed to have learned to be an effective NHL defender while still being three years younger than Dumoulin. Besides, if Jacques Martin and Sergei Gonchar can pull Justin Schultz out of his funk… I have no doubt they can do it with these guys. It would just be really nice if it came closer to Christmas Day than May Day.

Of course, of course, I didn’t ask for anything about goaltending. You’re right; I didn’t because, truthfully, the Penguins don’t need anything for their goaltending. They have a good set-up right now. They don’t need to change anything if they don’t want to and there’s no rush to make any moves. They’re not sinking rapidly this year but instead having a fairly normal regular season with some ups and some downs. There’s no need to reinvent the wheel just yet. So instead of brand-new defensemen and wingers this year, they need to make some tweaks and play the way they know they’re capable of.