The Realist NBA Awards, Part I 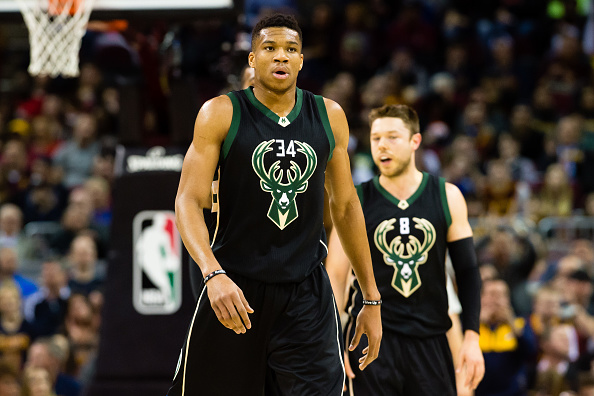 The 2016-2017 NBA season has come to a close. (Thank god. Being a Sixers fan, I’m not sure how much more mental frustration I could take thanks to GM Bryan Colangelo and the Sixers medical staff.)

The NBA Playoffs begin on Saturday. The series to watch is without question Houston versus Oklahoma City. Russell Westbrook versus James Harden for at least four games is 100 percent must watch television since two MVP candidates will be competing against each other in the first round.

Before the playoffs start on Saturday, there are some things that need to be worked out — namely NBA awards. Who am I to give my opinion on this? I’m not a professional sports writer with an ACTUAL vote or anything, but I am an NBA fan of over 30 years. Again, this doesn’t completely qualify my opinions, but the First Amendment grants my rights to them, so you’re stuck — unless you close the browser right now, which I hope you don’t.

There are six NBA Awards to hand out, and they will be spread out between two columns (today and tomorrow). These awards are being made with the most objective opinions possible. I have credibility with my Total Sports Live comrades to consider, so I won’t “fanboy” for the purposes of sensationalism — because that’s not me, and you all deserve better.

Let’s hand out some trophies.

Before he tore his ACL back in February, this award was going to Jabari Parker. I was literally licking the envelope of my ballot until there was a snap, crackle, pop in Jabari’s knee. All of his numbers are up across the board, including three-point shooting, which was a glaring weakness up until this season (up to near 37 percent from 26 or so).

Damnit, now I have to do more work. Thankfully, I do not have to go too far to find a suitable replacement.

Sure, Giannis (aka “The Greek Freak”) has been in the league for four years, and he’s made a decent name for himself. This year, Antetokounmpo made a bit more of a leap than some anticipated.

Antetokounmpo has improved his win shares by over five in one season for a Milwaukee team who won 42 games and is the sixth seed in the East, despite losing their second-leading scorer. The knock on the Greek Freak is his three-point shooting, but he’s only taken 180 this season. Antetokounmpo knows what he’s good at — being freakishly athletic — and excels at doing so. Giannis runs this team, and he’s the reason why Milwaukee is mildly threatening going into their first-round matchup with the Toronto Raptors.

Jokic has been a nice story for a 39-win Denver team that was in playoff contention up until this past Sunday when Russell Westbrook hit a 40-footer with three seconds left.

The Denver big man is the centerpiece in the Nuggets reshaping along with Jamal Murray and an improving Gary Harris. Jokic is a name you’ll be hearing a lot in the next few years, and he has certainly grown to where he should become a household name outside the Denver Metropolitan Area.

Giannis’s jump was just slightly better than “The Joker’s” jump, and that’s why the “Greek Freak” wins.

(Seals envelope and mails before anything else happens.)

The formula for handing out this award is relatively simple for me. Ideally, a sixth man is a player who isn’t in the starting lineup, but plays starter-level minutes. Twenty to twenty-five or more should be the threshold.

Tyler Johnson makes that threshold since he has to play behind Dion Waiters — the discoverer and developer of “Waiters Island”. Even so, Johnson logs quality minutes for a Miami Heat team that finished 41-41, just missing out on the playoffs. Johnson has played 30 minutes per game this season — the first of his four-year, $50 million contract he signed last offseason. In those games, he’s scored 13.9 points per game while shooting just over 37 percent from deep.

The advanced metrics make Johnson look like a viable candidate, as well. He’s second in the league in VORP (value over replacement player) at 2.0 among players who have not started a single game and 5.8 win shares.

As much as I love what Johnson has done, there’s no doubt in my mind that Iguodala has done so much more for the Golden State Warriors. Is it possible that he’s been the sixth man for as long as he’s been with Golden State? He played and started all 63 games for the Warriors in his first year there, but has only one start in his last three.

Iguodala is an “all-around” sixth man. He’s not just the Lou Williams/Jamal Crawford/JR Smith-type sixth man who comes in off the bench, jacks up threes, and goes back to the bench. When Iguodala is on the floor, he’s the point-forward, runs the offense effectively, shoots 36 percent from three, and defends the opponent’s best perimeter guy.

Iguodala’s averages are not impressive (7.6 points, 3.4 assists, 4.0 rebounds per game), but he leads the league in both VORP and win shares among players with zero starts. His .166 win shares/48 minutes rating — which is my new favorite stat thanks to my fellow stat nerd, Greg — bolsters the point for the former Sixer. Because of all that and what Iguodala has meant to Golden State this year from a two-way player standpoint, he’s my Sixth Man of the Year award winner.

(DISCLAIMER: It’s my plan to have at least one controversial award to hand out per column. Most Improved and Sixth Man of the Year haven’t had the kind of heat and debate around them as this next one. It’s one of the two that are the most heavily debated.)

The smell of folks arming themselves with rotten tomatoes is a little overwhelming. (Granted, they’re all coming from Sixers fans.)

When deciding who to give this award to, I had to ask myself a few questions:

First question: Are 31 games enough to justify giving the award to Joel Embiid? My answer is “no”. Embiid had a mind-blowing start to his career: 20.2 ppg, 7.8 rpg, and damn near 40 and 15 per 100 possessions. Statistics like that are unfathomable. UN. FATHOMABLE!

Second question: Is a very good last three months of the season enough to justify giving the Rookie of the Year award to Dario Šarić? Again, I have to say “no”.

Hold on a minute.

Dario Šarić has been on a mission since January.

“The Homie” has been on a tear since the calendar turned over. Here’s the issue. Obviously, Šarić’s numbers have improved due to the injuries to fellow rookie Joel Embiid and second-year center Jahlil Okafor. The Homie’s increased numbers and minutes can also be attributed to the trade of Nerlens Noel. This is the debate. How good would Šarić’s numbers be if all of those other bigs were healthy and on the roster? (I’m not even counting Ben Simmons.)

My vote for the Rookie of the Year award goes to Milwaukee’s Malcolm Brogdon. Many tomatoes and other items are going to get thrown at me by my fellow Sixers fans, but here’s the case I make.

Brogdon has been playing well virtually all season long. That’s the case that many will take, and it’s probably the right one. He sports 10.2 ppg, 4.3 apg, and 2.8 rpg shooting 46 percent from the field and 40 percent from deep.

Granted, Brogdon has had a similar uptick in stats since being inserted into the starting lineup. But even when he was a reserve for Milwaukee playing 24 minutes per game, Brogdon put up decent numbers (8.9 ppg shooting 45 percent from the field).

Brogdon stabilizes the point guard position for the Bucks when Giannis isn’t doing Giannis things since Matthew Dellavedova hasn’t been a worthwhile $38 million investment. His advanced metrics help his Rookie of the Year case as well: 0.7 VORP, 4.1 WS, .099 WS/48. Brogdon’s defense helped make the Bucks a top-ten defensive team since he can guard the opponent’s best guard when Giannis is busy defending the LeBron’s and the Paul George’s of the world.

Simply put, Brogdon has meant just a little bit more to the playoff-bound Bucks than Šarić has been to the Sixers. Šarić is putting up great numbers on a bad team — which is fine — but that does not lead to him getting my vote for the Rookie of the Year award.

Have I successfully angered enough people, today? Great. Let’s take a little breather, then, because I’m sure my award picks for Defensive Player of the Year, Coach of the Year, and NBA Most Valuable Player will upset some folks, too.