The Sid & Kids Line Is Even Better Than You Thought 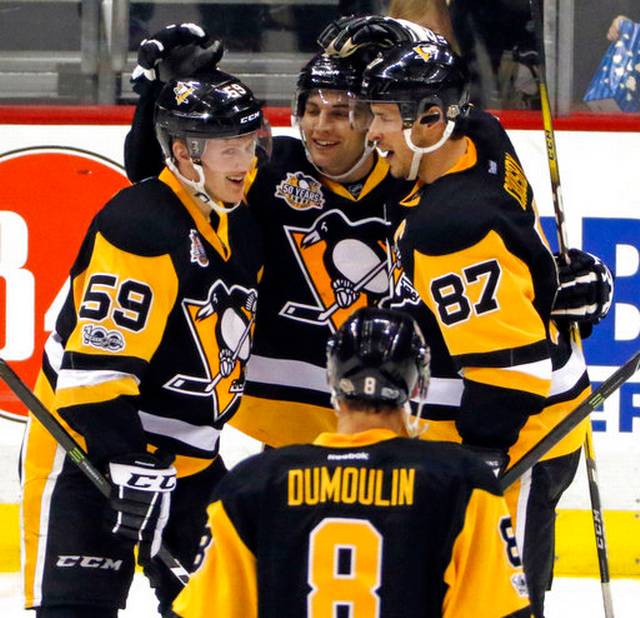 Since its inception a few weeks ago, the Sid & Kids line of Sidney Crosby, Jake Guentzel, and Conor Sheary has been terrorizing just about every defensive pairing and goaltender that has crossed its path.

While some lines take time to develop on-ice chemistry, the Sid & Kids line seemed to skip right past the growing pains part of the process and delved straight into generating shots and scoring chances at an almost unnatural level.

Fresh off of a natural hat-trick that put him at the top of the Rocket Richard race for the NHL’s top goal-scorer, Crosby seems to be right at home with two elusive, talented wingers that boast the speed and vision that are required to play with the NHL’s premier center.

This line has dominated virtually every statistical bucket you can think of, offensively speaking. The eye test tells us that the Sid & Kids line has been living in the offensive zone and the data backs that up.

While the HBK line of Hagelin, Kessel, and Bonino stole the spotlight for large portions of the stretch run and playoffs last season, that trio didn’t even sniff the success that the Crosby line is currently enjoying. Not only is this the best line rolled out by head coach Mike Sullivan this season, it’s one of the best lines in the last decade of Penguins hockey.

Let’s take a look at the data.

Before we look at the bigger picture, we’re going to take a look at how the Sid & Kids line stacks up against other line combinations the Penguins have employed this season.

Our research is going to take a look at several key data buckets that help us measure offense. If you’re uninitiated to the world of data in hockey, here’s a bit of a primer on what we’ll be looking at to judge this line by its peers:

Corsi-For Percentage: This is proxy for puck-possession. Corsi-For percentage looks at every shot attempt taken at even-strength and shows the percentage of how many of those shots went towards the opposing teams net. It tells us how much time a line is spending in the offensive zone.

Corsi-For Per 60: The number of shot-attempts taken at even-strength, expressed as a rate per 60 minutes. Essentially, this tracks shot volume.

Expected Goals-For Per 60: While Expected Goals might be a bit more complicated than some of the other data buckets we’re looking at, in a nutshell, it accounts for shot-quality. While Corsi is one of the best tools available to predict future goals, Expected Goals performs even better in that regard.

Scoring Chances For Per 60: The percentage of scoring chances for at even-strength expressed as a rate per 60 minutes.

Goals-For Per 60: And the easiest of all of these statistics, goals-for at even-strength expressed as a rate per 60 minutes.

All of this data is courtesy of Corsica. A minimum of 90 minutes at even-strength was required to make this list.

Now that we have our standard introductions of data out of the way, let’s dive into the results for this season:

Of the best puck-possession lines rolled out by Sullivan this season, the Sid & Kids line is out-performing all of them in virtually every category but Goals-For per 60, and that number is consistently increasing as the line has continued to rack up even-strength goals over the course of the last two games.

When Crosby registered his hat-trick against the Florida Panthers this past weekend, I made mention of respecting the process. Goals are the result of a lot of randomness. Sometimes they dry up, sometimes they come in bunches. Since players can’t control their own shooting percentage, the focus should be on controlling what’s proven as repeatable. In this case, we’re talking about shots and scoring chances. No line rolled out by the Penguins this year has dominated the offensive zone like the Sid & Kids line. It was only a matter of time before the floodgates opened.

Not only does the results put forth by the Sid & Kids line hold up against it’s current peers, it’s one of the most lethal offensive trios of the last 9 years.

To steal a line from my Pensblog colleague Rich Miller, they should rename this line the “Forever Line” because it should never be broken up.

Sullivan pairing Crosby with these two young forwards is paying off in spades for the Penguins. As each game passes, they show no signs of slowing down. As you can see on the chart above, even the vaunted HBK link, the “best third line in hockey” of Staal, Cooke, Kennedy, and the Malkin/Neal combination couldn’t put up the sheer force of offensive dominance that Crosby’s current line is giving the Penguins on a nightly basis.

So how does this line stack up with the rest of the NHL?

Sid & Kids vs. the Rest of the NHL

In this segment, we’ll take a look at the same buckets of data, only this time we’ll compare it to the top puck-possession lines of the current National Hockey League.

While the Towes/Panarin/Kane line in Chicago has put up gaudy shot totals and great overall puck-possession, they’re still getting outscored and outchanced by the Crosby line. These are some heavy hitting trios, and the Sid & Kid line still lines up extremely well, if not better, than most of them.

Obviously, we’re still in the infancy of this line’s existence. That being said, these early returns are extremely encouraging. Mike Sullivan has really hit on something here.

This all begs the question, what makes this line so good?

I’m going to break the video down in a future post, but I think there’s a couple of keys to touch on here.

To start, this line is extremely adept at gaining access to the offensive zone. Each of these players are adept at getting creative in regards to zone entries. Moreover, once they establish possession of the puck in the offensive zone, their speed and elusive nature make it difficult to contain them. The Florida Panthers had a difficult time getting out of their own zone with Guentzel and Sheary chasing down loose pucks all over the place.

I’ve seen a lot of people speculate about this lines ability to maintain status quo once the going gets tough in the playoffs. I don’t see any reason why their success can’t continue in that environment. While they lack the traditional size and physicality that’s expected to be necessary in the post-season, they’re extremely hard to pin down. If your goal is to play the body against this line, good luck. It’s well documented that Crosby himself is one of the more elite (if not the most elite) puck protectors in the National Hockey League. Add in the shifty skating and touch passing of Sheary and Guentzel and they’re a real handful to deal with. As the old adage goes, you can’t hit what you can’t catch.

Another key here is the fact that Crosby is now dealing with two natural trigger-men. While Sheary and Guentzel don’t exhibit the traits of a pure sniper like James Neal, they’re both adept at getting quick shots off without having to settle the puck down. Each of these forwards is also adept at finding the soft spot in the ice; they can get to areas where they make themselves available for quick shots and scoring opportunities.

When your pair younger players with superstars like Crosby, there’s always the chance that they’ll go into “defer mode” and just force-feed the puck to Crosby. That isn’t happening here. Sheary and Guentzel have found each other just as much as they’ve found Crosby, and vice-versa.

All of these elements make this trio of forwards difficult to handle. With players like Bryan Rust set to return from injury shortly, the Penguins coaching line should keep the Sid & Kids trio intact. It’s not just one of the best lines in hockey, its one of the best lines in recent Penguins history, and it has all the signs of a line that can help the Penguins will their way to a repeat chance at a Stanley Cup.