There Isn’t Enough Smart Water In The World 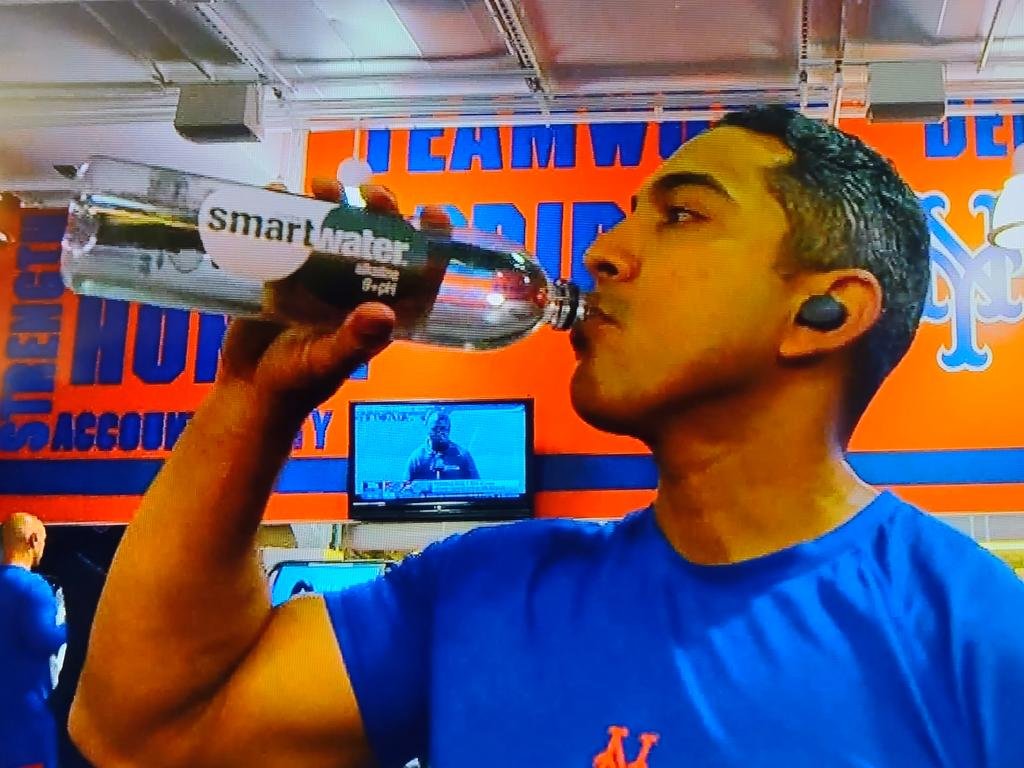 This entire game felt like it was watching a loved one get tortured.

Rich Hill had his best outing as a Met, throwing six innings, giving up one run and throwing 64 strikes out of 83 pitches. Jeurys Familia and Aaron Loup held down the 7th and 8th, and Seth Lugo escaped his own jam in the 9th when it seemed like the game was going to sink to the bottom of the ocean. But Sandy Alcantara was absolute dynamite. He threw nine innings and struck out 14 in 114 pitches, and only a Michael Conforto home run kept the Mets alive.

Conforto, while he was in the on deck circle, saw Alcantara strike out Pete Alonso on a changeup, and looked like he was looking for it in his at-bat. He got it, and thankfully he got one that wasn’t quite as good as the one Alonso saw, and he jacked it out to tie the game.

So we go to the 10th inning, and Javy Báez hits a ball down the line to lead off, and he hits one down the line that Jesus Sanchez drops while his feet were in fair territory. Bad enough the umpire on the field calls it foul, but fine … it’s a bang bang play and who is looking at feet from that far out. But the replay center in Chelsea looks at it and still calls it foul.

For the love of God, his feet are in fair territory! I felt I was watching the Big Ten referees review a call on an Alabama wide receiver. HE’S GOT ONE FOOT DOWN!!!!!

Báez struck out, Jeff McNeil grounded out, then Luis Rojas wakes up and pinch hits and pinch runs for everybody. Luis Guillorme pinch hits for Kevin Pillar in extra innings even though Pillar has hit two extra inning home runs in the past month, Albert Almora then pinch runs for Guillorme, and Patrick Mazeika pinch hits for James McCann because there are 40 catchers on the roster, right? Mazeika hit one you could measure with a seamstress’ tape measure and the inning was over. (By the way, why not J.D. Davis instead of Mazeika?)

Edwin Diaz then came in for the 10th with the ghost runner, and Báez saved him by corralling a wild throw on a topper to the mound for the first out. Then after Diaz struck out Sanchez for out number two, he had Bryan de la Cruz coming up with first (and second) base open, and Lewin Diaz on deck.

Now, managers have a tough job. A lot of moves that they make have subtlety to them, and there are two sides to every move. But this one was easy. de la Cruz is hitting .342 while Lewin Diaz was hitting .108 for his career. Also, an .846 OPS for de la Cruz, and a .565 OPS for Lewin. There isn’t one stat that Luis Rojas can cite that would tell me that pitching to Bryan de la Cruz was a good f’ing idea. But lo and behold Rojas, who was awake in the top of the 10th making moves like he was the offspring of Gordon Gekko and Leon Phelps, retreated into his shell and did nothing in the bottom of the 10th.

Luis, grab your Smart Water for this one:

There was also some chatter that maybe Rojas was trying to get Mazeika’s attention to try to get Edwin to walk de la Cruz. Bullshit. There isn’t a chance in hell that Mazeika couldn’t hear him over the din of the raucous Miami Marlin crowd. Step out of the dugout. Visit the mound. Run out to where the Home Run Sculpture used to be and wave your wee wee around like you were Mickey Callaway at a furrie convention. I … DON’T … CARE!

It’s bad enough that this game always seemed to be out of reach, but when your manager throws it out of reach, it’s infuriating. I know this game was on the edge anyway, but Rojas throwing it away makes me wonder why the hell I invested do much time into September only to have Smart Water kick me in the nuts with “HEY, RIGHTY-RIGHTY MATCHUPS YUT DA DUT DA DUT DA DUT!!!”

Also, the Nationals actually beat the Braves. Good job, Luis. You had the golden ticket and fed it to your dog.