This Isn't How it was Suppose to End 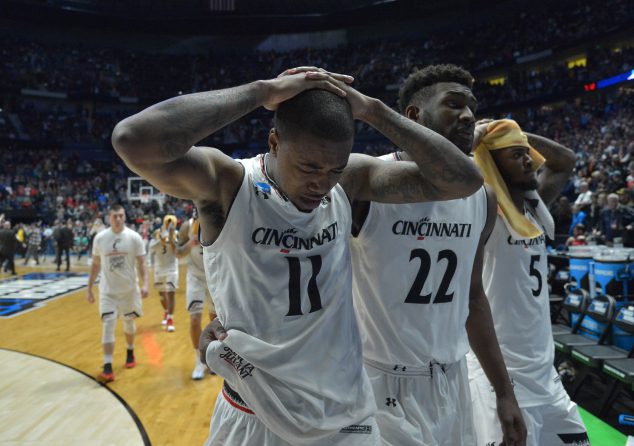 I was thinking about next Saturday. Forget looking ahead to Thursday night, I was thinking about the Bearcats in the regional final. I was looking right past Loyola, sorry international superstar Sister Jean, and wondering how the Bearcats would fare against Kentucky. Or if we were even more blessed, Kansas State. Nevada was the team that I wanted in the round of 32. Texas had the NBA talent, Nevada had a nice story. The Wolfpack had faded a bit down the stretch, losing twice in three games, both times to San Diego State. The win was a rocky affair against UNLV. Even in the Nevada win against Texas, they needed an incredibly dramatic comeback to force overtime and eventually pull out a victory. My main worry was that UC would come out soft like they did against Memphis and Houston lately.

My worries were quickly quelled with a game opening 10-0 run. The lead ballooned to 18-4. Eric Musselman had to call a pair of timeouts. Kyle Washington was stomping down the court like a weirdo, doing all the Kyle Washington stuff we have loved over the last two seasons. The lead didn’t really fluctuate from there either. Cincinnati maintained a 12 point lead into the locker room. It was about as great a half as you could picture. The only quibble one might have had was that Mick left Gary Clark and Jarron Cumberland on the bench with two fouls.

The second half started with UC putting in 5 straight to get up 17. The lead would be pushed to 22. I was tweeting about how it was really fun to be on the right side of a round of 32 blowout. This was dangerous hubris. Because this happened:

That’s not a great graph.

According to the numbers, Cincinnati’s win probability was 99.5%. 99.5%! Higher than the Falcons over the Patriots in that Super Bowl. It was an unfathomable lead to blow. And yet, here we are watching sad player interviews. Here we are having to deal with the awful realization that Gary Clark will never play another game as a Bearcat. Here we are looking at a future without Kyle Washington and maybe Jacob Evans and Jarron Cumberland, depending on what they think about the NBA draft. I think Cumberland will come back, but I think that he and Evans should both declare and see if they have what it takes. It seems like a no brainer than Evans will, given that there is no penalty for coming back. Same with Cumberland now that you can declare and come back twice. These last few sentences are what this game did, they turned it from a conversation about what is happening to what could happen. That’s because our ride is over.

There is no other way I can put this thought out there besides it wasn’t time for our season to end. This isn’t how it was suppose to go down. We were suppose to see the best Bearcats team in 16 years give it all they had to make a deep run. This was the year that UC was suppose to break through. This was the class. The Bearcats were the kings of the AAC all season. They had a tough two game stretch in December that changed the mentality. These weren’t the same old Bearcats that were all defense and no offense.

For 29 minutes on Sunday afternoon, they weren’t the same old Bearcats. They were ass kickers. They were sending a message to Loyola and the other side of the bracket that the South region goes through us. Then two points, three points, two points, three points and suddenly the monstrous 22 point lead was cut to 12. That’s no biggie I thought, that’s one of the advantages of being up 22, you can eat a 10-0 and be fine. Only the run wasn’t a 10-0 run. 6 more Nevada points joined the fray. The Cats snapped out of it with a layup, but three straight times the lead was pushed back to 8, Nevada had an answer.

There was a crucial pivot point. With 5:25 remaining, Jarron Cumberland picked up his 4th foul. With UC up 8, it would make sense for Mick to send him to the bench until the 4 minute media break. If things got hairy before that, he could just call timeout and get Cumberland back. You wouldn’t think he’d roll the dice with 4 fouls. Yet, that’s exactly what happened. On a long rebound with 4:04 left, Cumberland got caught reaching around the rebounder. He was gone. UC didn’t score another field goal.

The feeling of dread that you feel as a Cincinnati sports fan is very real. We’ve been punched in the stomach so many times that it’s killed 10 Houdini’s. I don’t need to recap every team’s problems. As a Cincinnati basketball fan, we’ve seen many brutal NCAA losses. From Jarrod West to Darnell Burton being fouled against Iowa State to Kenyon’s leg to Dan Gadzuric and UCLA ending the 2002 team’s dream season to Creighton to Harvard to Octavius Ellis not dunking the ball fast enough against St Joe’s to Sunday, there are enough nightmares to make you wonder if it’s all worth it.

That feeling of dread was incredibly high as Nevada cut the lead back to 6, down to 3, getting it back down to 3 after Cane Broome calmly hit some free throws, to eventually tying the game with 57 seconds left. UC called a timeout to get a quick play going. They wanted two possessions with under a minute left. I don’t think the play Mick drew up was Jacob Evans driving one on three into a crowd, but that’s what happened. His wild shot attempt was gathered by Nevada, a common theme during the run. Cody Martin missed a jumper with 15 seconds left. I don’t know if it was possible for Gary Clark to get that rebound, but he’s going to have nightmares about it forever. Josh Hall pulled it down, stepped up and got a shot to fall. Just like that, UC was losing.

Cane Broome rushed down the floor into …. nothing. UC had 9 seconds and didn’t even get a shot. Broome wanted to pass because he put himself in no man’s land. He tried to get the ball to Gary Clark, but Clark was smothered, as he was much of the second half after an early outburst. Clark tried to pick up the ball and do something with it, but time was not his ally. He collapsed on the floor after the buzzer, stunned as what happened. Stunned as we all were. Stunned as surely Nevada was on their winning sideline. UC gave up 32 points in under 11 minutes. Nevada had 32 points the entire first half.

Cincinnati and Virginia had quite a few parallels this season. Both played historically great defense, both had solid offenses, both won their leagues, both were in the South region. Both had amazing years wiped out by historic collapses. Virginia’s will stand the test of time as an all time meltdown, as they fell to 16 seeded UMBC. Cincinnati’s amazing season ends on the biggest collapse in NCAA tournament history. No one had blown a 22 point lead in the second half. No one had done it in under 11 minutes. Both saw their lowest remaining potential opponents flame out before them. Neither could get a stop when it mattered. Neither could produce offensively when they needed to the most. Both will watch as at best a 5 seed will come out of the wild South.

There is a lot more to write about the great career of Gary Clark, but it really saddens me that his career ended with him not being able to get that shot. Gary had a solid game, 11 points, 10 boards. He had a couple of big offensive rebounds late, he blocked a layup that would have been the standout play if UC hung on. But he was taken away from the flow of the offense. So was Jacob Evans for the most part. With Evans bringing the ball up a lot, Nevada trapped him and made others try to make plays. Evans had 19 points on 19 shots. If Justin Jenifer makes one of his wide open shots during Nevada’s run, maybe that stifles the comeback just enough. If Kyle Washington, who had a pretty solid game offensively, can make a layup down the stretch, maybe that’s all UC needed to calm down and run the offense. There are a million what-ifs in a game that will be hard to forget.

The brutal part about this whole experience is that this team will forever be tainted by a historic choke. They had a 22 point lead and lost it in under 11 minutes. They could only manage 8 points during that time on 3 field goals, something that will only fan the flames that the offense is always a problem when Mick Cronin is the coach. Cronin has to carry another early loss with him, having to answer the same questions about if his preferred style of play is really what’s best for sustained success.

It’s a shame because this team was a joy. They played with such unity and passion and fire all season long. They overcame adversity to become conference champions. They won the conference tournament in dramatic fashion over a game Houston squad. They did things that Cincinnati hadn’t done since it’s basketball peak in the early 2000s. They won 31 games and had fun doing it. They were a team that was so easy to root for and a team that had everything it took to be the team that got us back to the Final Four.

Only they didn’t have more than 11 minutes of basketball left in them. This loss was brutal, definitely the most brutal tournament loss of the modern era. The only one that can historically compare is the 1963 championship that UC squandered to what would have been their next opponent, Loyola. It feels like the Bearcats left wins on the court. That’s a feeling that’s going to be hard to get over.

This isn’t how it was suppose to end.

View All Posts By Scott

View All Posts By Scott

Bearcats BlogCast: Goodbye Mick Cronin, Who Should be Next?