Three takeaways from the Islanders’ 6-2 loss to the Rangers 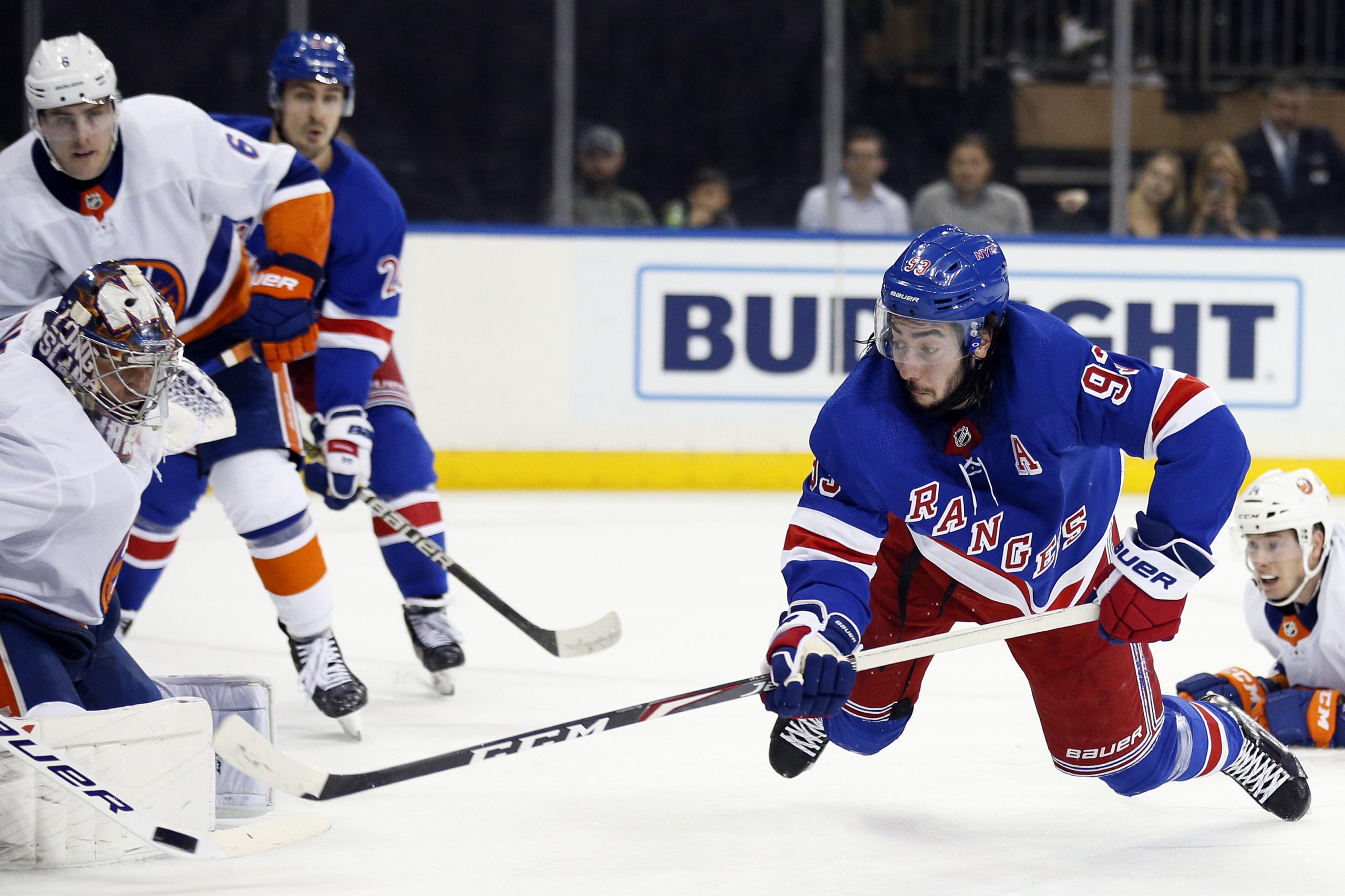 NEW YORK — The Islanders suffered an ugly 6-2 loss at the hands of the New York Rangers on Monday in the first of three meetings over the next two weeks.

Artemi Panarin scored twice and finished the game with five points, while Chris Kreider, Adam Fox and Jacob Trouba also scored for the Rangers. Jordan Eberle and Brock Nelson scored the Islanders’ lone goals in the loss.
Semyon Varlamov gave up all six goals before being pulled in the third period. Thomas Greiss played in the final 9:45 of the game.
Below are three takeaways from the loss:

There’s no way to beat around the bush on this one… that was an ugly loss for the Islanders. After a quick start for them, they watched the Rangers dominate for the rest of the first period.

The Islanders were outshot 17-7 after one period and never seemed to find the jump they had in the opening few minutes of the game. The Isles seemed to struggle to make the right plays or generate many scoring chances.

Then, when the Islanders started to pepper New York starter Alexandar Georgiev he was there to make the big saves.

“For us in terms of the puck management was terrible,” Islanders coach Barry Trotz said. “Their top guys were better than some of our top guys. I thought our level of battle wasn’t where I expected it to be tonight. All that being said, we got what we deserved.”

The Islanders had started off the game well, quickly outshooting the Rangers and Jordan Eberle found the back of the net 18 seconds into the first period. Things turned after two fights less than three minutes in.

After that, the Rangers had the Islanders number the whole night

“It wasn’t even close to good enough,” Anders Lee said. “Not a good enough effort. That great start, but they respond and we have a hockey game. Too many times we didn’t come out with the puck. Too many times we either gave it away or turned it over. It’s a good transition team over there and they put it down our throats.”

The Rangers had nine takeaways when all was said and done and 18 blocked shots.

Varlamov did what he could

There were a few goals Semyon Varlamov will surely want back, but the Islander starter did all that he could to hold off the Rangers’ offense. The Russian netminder made save after save as the Manhattanites put up 17 first period shots.

In the second, Varlamov stopped a Tony DeAngelo chance as the Rangers came charging up the ice on a three-on-one chance. In the end, though, there wasn’t enough there to hold off the Ranger onslaught.

“Any time to you lay an egg it’s a disappointing. The best part is we have a good group of guys here and a lot of character. I don’t expect this to flop over to tomorrow. We’ll be ready to go.” – Jordan Eberle pic.twitter.com/kgDOXDZNF1

The errors in front of him didn’t help the effort either.

“Our goalies have been great all year. I don’t know how many shots they had in the first, but it was quite a few,” Eberle said. “Some good chances too. Varly stood strong and later in the second and third we were giving them odd-man rushes and breakaways. You can’t expect him to save all those, so that’s on us.”

islanders can’t have this happen again this week

Things continue to get tighter in the Metro Division, so night’s like Monday can’t happen much more. The Islanders have a quick turnaround, with the struggling Detroit Red Wings on tap Tuesday before they see the Rangers again on Thursday at the Coliseum and host the Washington Capitals on Saturday.

Another divisional tilt again Carolina follows and they cap things off on Tuesday with a return to Madison Square Garden. Points over the next four games will be crucial and an effort like Monday against a divisional rival — especially the Rangers — can’t happen again.

“That’s unacceptable. I mean these are the games we get up for,” Lee said about the Islanders’ effort in a rivalry game. “It shouldn’t be a question about our effort. We talk about battles and all that stuff. We shouldn’t have to answer a question about that. It should be a no brainer.”