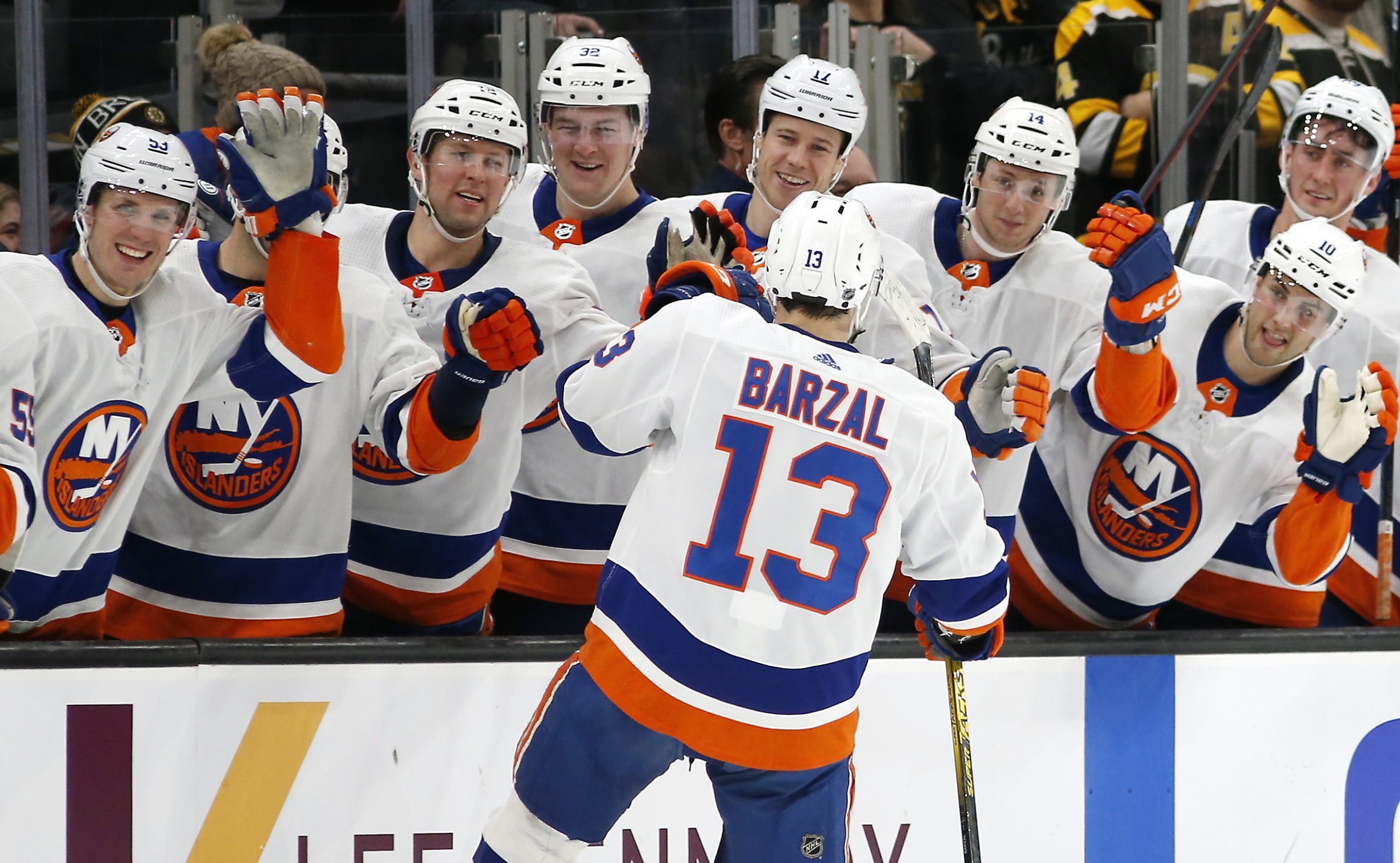 BOSTON — The Islanders bounced back from an ugly 8-3 loss on Tuesday with a 3-2 shootout win on Thursday over the Boston Bruins. Mathew Barzal scored the game-winner in the shootout.

Johnny Boychuk and Barzal scored during regulation in the Islanders’ win. Semyon Varlamov made 27 saves in his 12th win of the year.

Below are the three takeaways from the Islanders win over the Bruins:

It was the bounce-back win the Islanders needed

The storyline entering Thursday night was how would the Islanders respond to the 8-3 blowout they suffered the previous game. They answered that question with a strong effort against a tough Bruins squad on the road.

While the shots total was low through the first two periods, the Islanders buried their chances and gave Boston a run for their money.

“We locked it down pretty good against a really good team,” Islanders head coach Barry Trotz said. “Talk about a little bit of a chess match. They were checking well, we were checking well. Guys were committed and not a whole lot was getting to the net… Real good bounce-back game for us.”

"In the second we go that big save. That was huge. That was the save of the year and we got some momentum off that." – Barry Trotz pic.twitter.com/dDEatak1vG

Part of it was the Islanders were sacrificing the body to get in the way of the Bruins shooting lanes. The Islanders finished the night with 19 blocked shots, with Scott Mayfield,c Adam Pelech and Boychuk each stepping in front of three shots.

Pelech threw himself in front of a shot from Charlie McAvoy in the first period as the Bruins put some pressure on the Islanders.

The Islanders also managed to rally from a goal down in the second period and battle back after allowing a goal on a five-on-three in the third period. After surrendering the tying goal, the Islanders held off Boston through the rest of the five-on-four advantage they had.

“Tonight we played a really good hockey game, both teams did,” Anders Lee said. “That’s a solid matchup right there and I thought we were resilient at times after the five-on-three they score right away. They were on the power play for three, four minutes there and we just stuck with it. We were able to get that extra point at the end of the game.”

There is no question that Varlamov’s second period save on Anders Bjork is a candidate for save of the year. Bjork was so confident that he had scored he raised his arms for a brief second before realizing that the Isles’ netminder had the puck in his glove.

It was an incredible save for the goalie, who was able to extend his glove out just in the nick of time.

“I was just lucky, to be honest with you,” Varlamov said with a chuckle. “I only had the chance to reach with my glove and then he shot right into my glove. The net was like wide open. It was just one of those days where the puck went into the glove.

“He shoots that 10 more times then he’s probably going to score nine out of 10.”

Despite seeing a relatively low number of shots on Thursday, Varlamov was critical in the Islanders’ win. Much like the rest of the team, he too was looking to bounce back after the clunker against Nashville.

And his second period save helped spark the Islanders.

“That was a turning point for sure,” Lee said. “That fired us up. I think that’s with four and half minutes left, five minutes left in the period there and we end up going out there a minute later and scoring a goal. That’s the kind of stuff you need to bail us out, which he did and he stole a goal.”

It was a scary sight late in the third period for Cal Clutterbuck. The Islanders forward went to hit Patrice Bergeron and as the Bruin went falling forward his skate caught Clutterbuck on the wrist.

Clutterbuck immediately shed his glove and skated right to the Islanders’ bench and down the tunnel into the dressing room. TV replay showed a visible gash on Clutterbuck’s wrist and he was taken to a Boston hospital, Trotz told reporters after the game.

“I think he’s just getting stitched up and we’ll see where it is there,” Trotz said. “Hopefully it’s not too serious, but those are always scary when a stick comes up.”