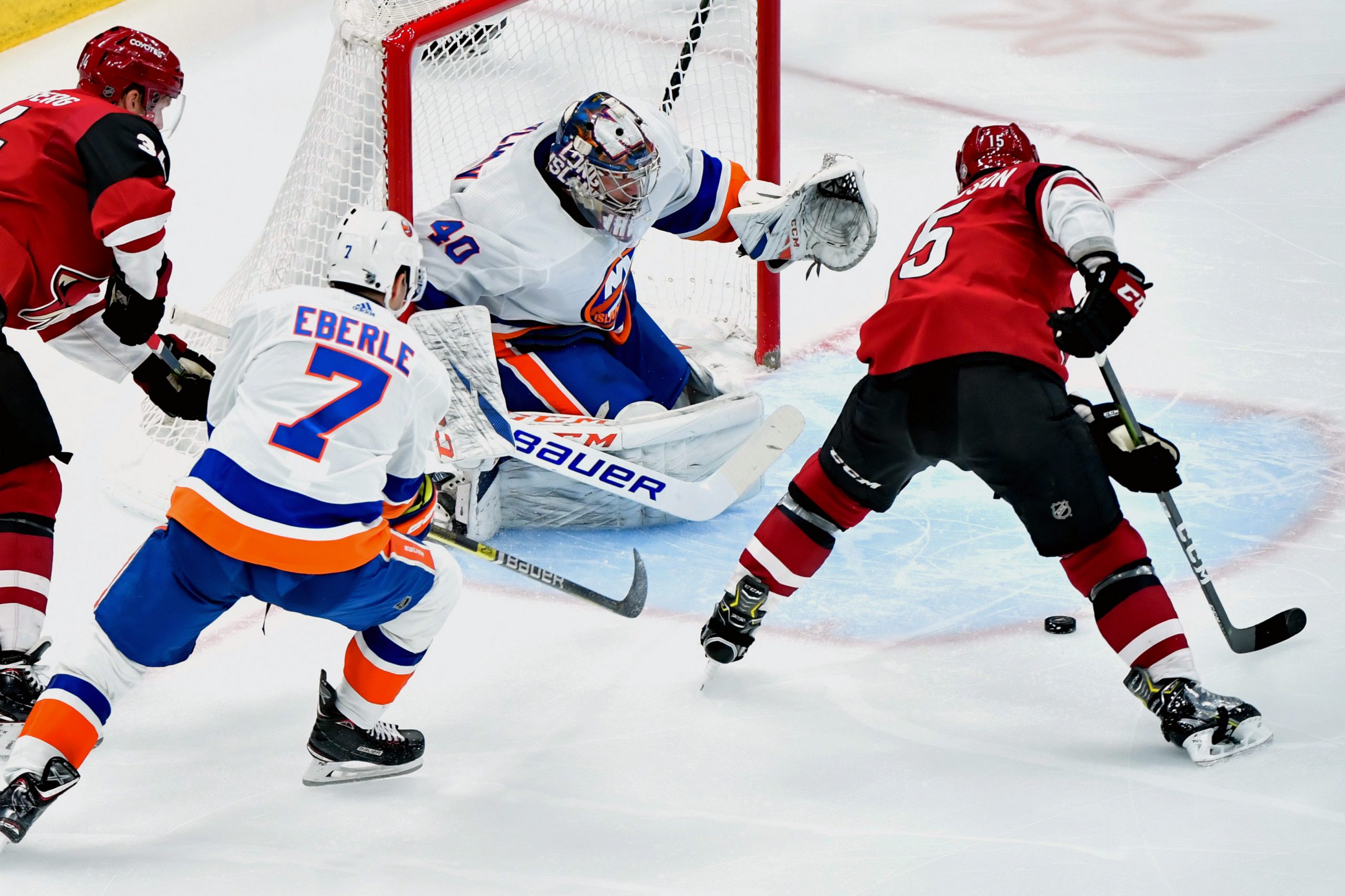 Despite snapping a scoring drought at 166:46, the Islanders dropped their third consecutive game in a 2-1 loss to the Arizona Coyotes.

Anthony Beauvillier scored the Islanders’ only goal of the afternoon to cut the deficit to 2-1 at 6:42 of the third. Semyon Varlamov made 30 saves in the loss for the Islanders.

Despite scoring for the first time in over 8+ periods, the Islanders offense struggled to finish off great offensive opportunities tonight.

Putting up 29 shots on goal, the Islanders gave themselves more than enough opportunities to put a few shots in the back of the net, yet they scored a single goal.

Mathew Barzal and Jordan Eberle had their moments in this one, resulting in prime chances wasted. Barzal struggled to keep the puck on his stick on a semi-breakaway and then moments later he and Eberle found themselves all alone on Arizona netminder Anti Raanta. Barzal quickly fed Eberle, who was closer to the net, but Eberle struggled to corral the puck and it went to the near boards.

The Islanders were given three power-play opportunities and took plenty of shots. Again not finishing off plays with the extra man.

Was there a bit of bad luck in this one? Yes, Jordan Eberle hit the post from point-blank range, Leddy hit the post and Bailey hit the outside of the post. Anders Lee looked surely to bury a rebound goal but his stick got lifted.

That happens to every team and the better teams are able to overcome it.

Anders Lee, in post-game interviews, talked about what the team needed to do to get out of this scoring slump.

"We're playing fine hockey, we're just not putting it in the back of the net. It's that final step, it's that final bounce. Right now it's just not going our way. We've got to continue to fight and continue to stay together. We'll come through." – Anders Lee pic.twitter.com/R7IUmp9Hhw

After stopping 41 of 43 in a magnificent performance in the 1-0 loss to the Vegas Golden Knights back on Saturday, Varlamov was not as sharp in this one. Early on it seemed he was struggling to track pucks, and that continued throughout, leaving rebounds in very dangerous areas. It was not an awful start by any means, as he stopped 30 of 32 shots, but he did put more pressure than usual on his defensive unit.

Rebound control is correlated with the ability to track the puck, and if that initial reaction is delayed, then controlling where the puck goes following the shot becomes sporadic. And luckily for Varlamov, his defensemen were able to clear the front of the net, or tie up loose sticks, to ensure that this did not come back to bite the team.

The first goal that was scored was a fluke of a goal off of Nick Leddy and into the back of the net.

Varlamov was still looking for the puck well after it went in and Nick Leddy’s job is to get that man in front out of the way, which he did not do.

The second goal of the game was another one in which an Islander defenseman — this time Scott Mayfield — did not do his job in front of the net.

Garland's 20th of the season. 🤩 pic.twitter.com/z3yqmXvynt

Varlamov was not the problem in this game, but it will be ultra-important for Varlamov to track the puck a lot better, especially with his team not scoring.

Making the Most in Debut

Despite losing the game, Andy Greene’s first appearance in an Islanders jersey went swimmingly. He was able to pick up his first point in his first game, picking up the primary assist on Beauvillier’s third-period goal.

Sick deflection by Beauvillier, but a great heads up pass by Greene! #Isles pic.twitter.com/oAgxirWb7d

For a team that has not had much offensive output from the defense this season, Greene may just be the spark needed. He was making plays in the offensive zone, with crisp passes as well as taking the space given to him to create even more chances.

On the defensive side of the puck, he was the best defenseman on the ice for New York. After Varlamov left a juicy rebound, Greene was able to tie up the opposing player’s stick in front and stopping a sure goal. Later in the game, he was able to beat out the speedy Taylor Hall for a loose puck.

Late in the third, Greene had no problem giving up the body to stop yet another sure goal after another juicy rebound came to an Arizona skater.

With his leadership, the back-end looked like a unit. He was leading by example out there in his 19:46 of ice time and spoke postgame about the team’s performance.

"I thought we skated well. I thought we created a lot of chances. How many posts did we hit there? It's coming. I think we played a really solid game. Just from the first day, it was fun to be a part of. I thought it was a solid game for us." – Andy Greene pic.twitter.com/1OaLInZ9kW

Just his presence in the locker room and on the ice showcases the importance of acquiring him.