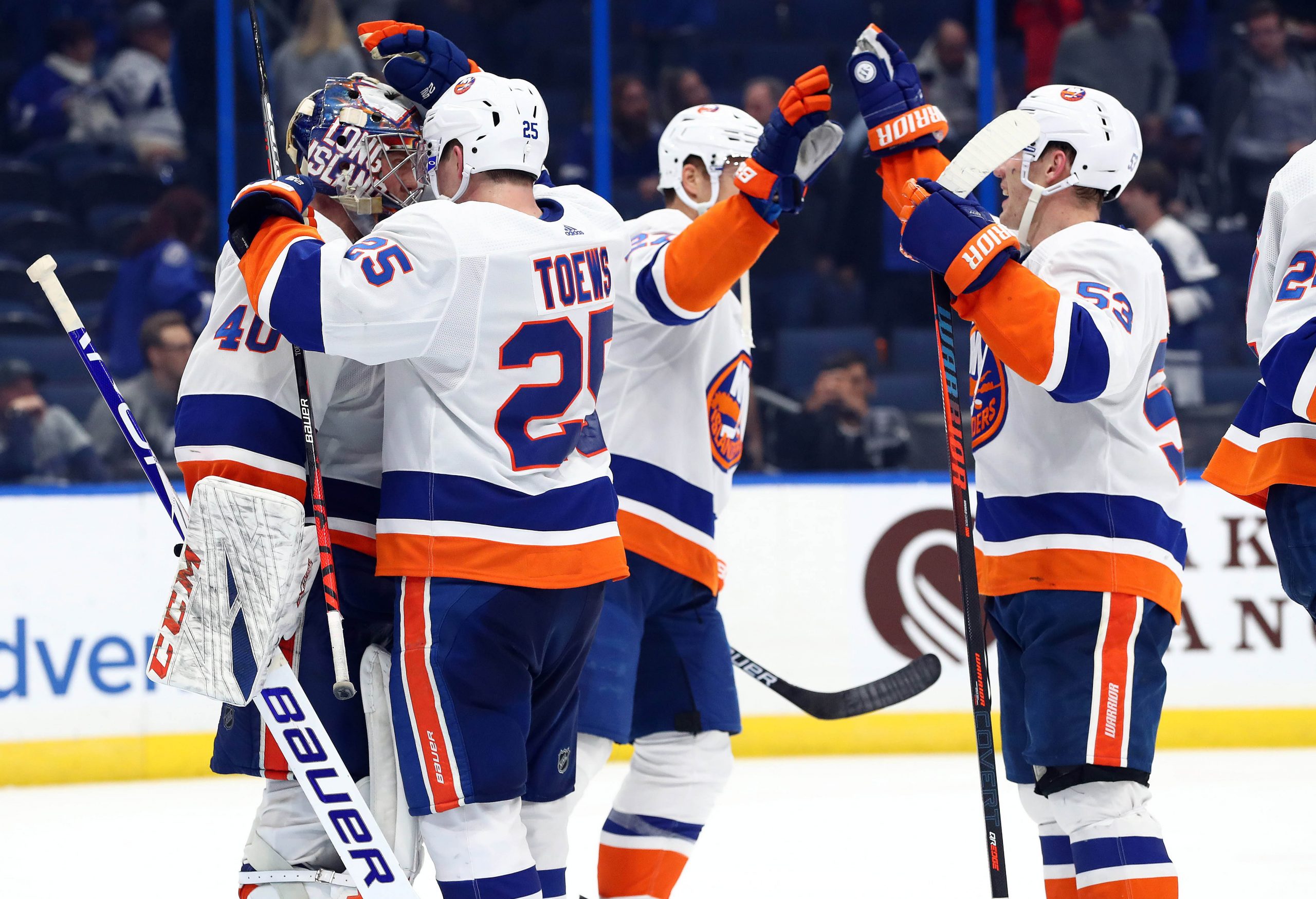 The Islanders came away with a 5-1 win over the Tampa Bay Lightning on Monday night, despite being outplayed for a majority of the game. The Lightning seemed to be able to do everything but put the puck in the net. The Islanders, with the limited opportunities they were given, were able to do what the Lightning could not.

Brock Nelson scored twice, and Ross Johnston, Josh Bailey and Anders Lee each added a goal of their own.

The Penalty Kill Coming Up Clutch

The Islanders found themselves heading down a slippery slope getting into some penalty trouble in the second and third periods.  While this game did not seem close on the scoreboard, the penalty kill unit gave the Islanders a big advantage in winning this contest.

Against the likes of Steven Stamkos, Nikita Kucherov and Victor Hedman, the Lightning’s power-play unit is no joke. Tampa Bay, which scored five power-play goals against the Rangers recently, was absolutely shut down on their two opportunities on Monday.  The two penalty kill units for the Islanders were able to limit the third-best power play in the league to just four shots.

The Islanders were able to take a 1-0 lead in the second period, but quickly found themselves shorthanded after Scott Mayfield took a pair of penalties and the Islanders found themselves a man down. On this kill, Cizikas dove to clear a loose puck out of his own zone and Josh Bailey was able to catch it off the boards all alone for a  breakaway opportunity. Bailey, who is known for having a good forehand move, was able to bury the shorthanded chance and put the Islanders in front by two.

Ross Johnston Fitting in Nicely on the Top Line

Head Coach Barry Trotz may have found something here. Johnston has played very strong on the top line alongside Mathew Barzal and Josh Bailey. Monday showcased this with Johnston, on an odd-man rush scoring the Islanders’ opening goal.

Not sure what Tampa is supposed to do when the Isles can roll out Ross Johnston like this. pic.twitter.com/GDwzzYG3Yj

Besides Johnston being a strong player in front of the net, and his ability to chase after loose pucks and win board battles, he apparently has a strong shot.

“I just kind of threw the puck on net and it ended up being a good shot,” Johnston told reporters when asked about the goal.

With the increase in time on ice, there appears to be increased confidence that has come with it. However, what hasn’t changed is the brand of hockey Johnston is playing.

We have seen in the past Islanders coach Barry Trotz ride the hot netminder. Right now that would be Semyon Varlamov.

Varlamov was able to stop 31 shots on 32 attempts, pushing his season save percentage to a .926. When he goes back to watch some game film, he will see right away why he was so effective against the Lightning. Every save he was making was at the top of the paint or a few inches outside. His aggressive style limited the number of opportunities for the high powered Lightning offense. And yes, there were a handful of pucks that went off the post/crossbar, but it was because of his positioning that these pucks did not end up in the back of the net.

Varlamov with the robbery, then Johnston with the SNIPE 👀 #Isles pic.twitter.com/8YvnyXunbi

Even on this breakaway, Varlamov challenged speedster Corey Conacher, eliminating the backhand opportunity. His save ultimately set up Ross Johnston’s goal making it even more crucial.

Varlamov in his post-game interview credited the win to the play of his teammates in front of him.

‘The boys are battling in front of me,” he said. “We’re playing really good defensively like tonight, that’s why we won.”

He was right about that, but Varlamov deserves just as much credit towards the win.

The biggest save of the night came against Pat Maroon early in the third period. With a seemingly wide-open net, Maroon was robbed by the diving glove hand of Varlamov.