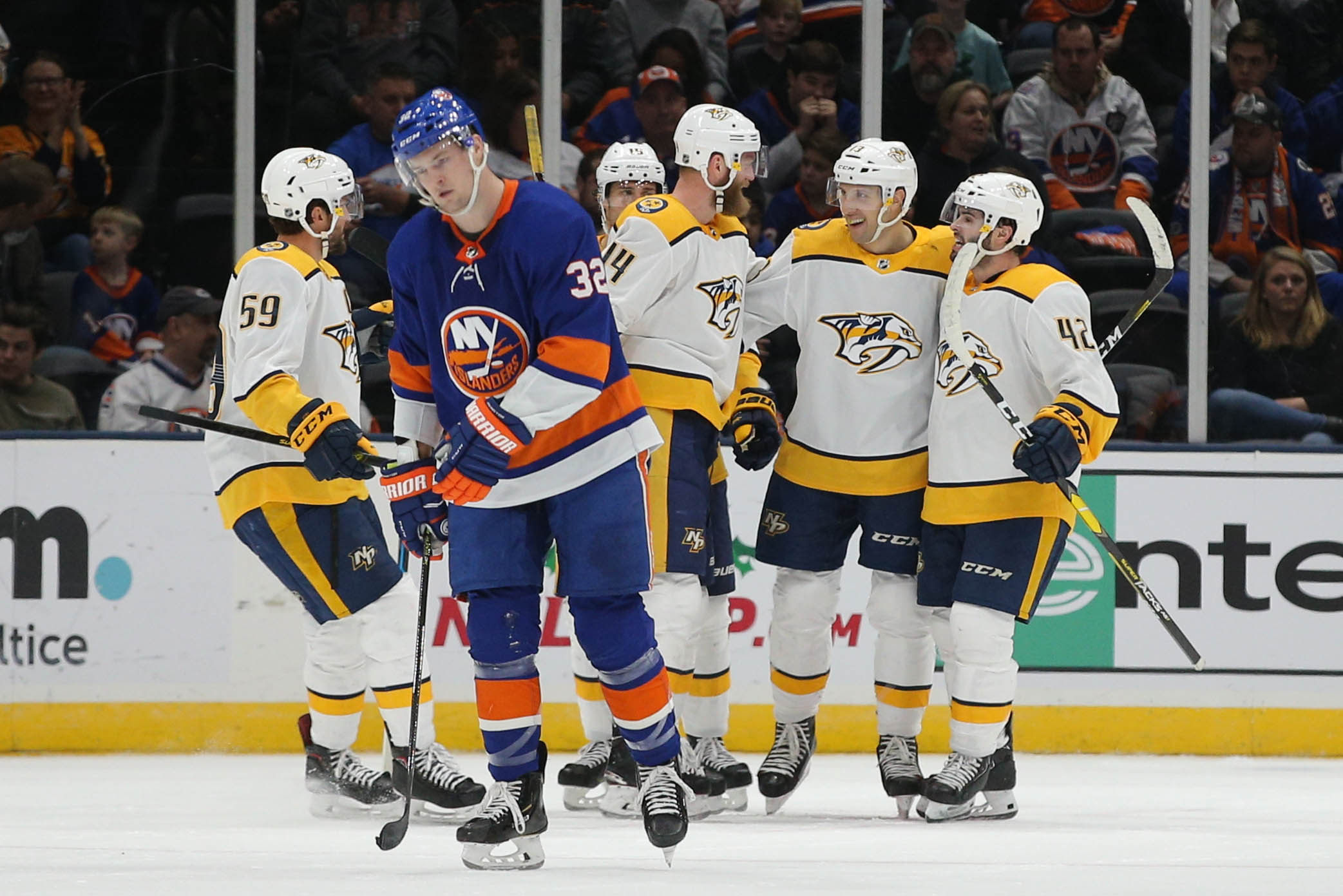 UNIONDALE, N.Y. — The Islanders hadn’t allowed eight goals at the Nassau Coliseum since Oct. 27, 2008. That changed Tuesday when they suffered their worst loss of the year to the Nashville Predators, 8-3.

The Islanders had bounced back from 1-0 hole in the first period and led 3-1 early in the second period. However, the wheels quickly came off and they allowed seven unanswered goals before the final buzzer.

Brock Nelson, Derick Brassard and Casey Cizikas scored for the Islanders in the loss. Thomas Greiss made 10 saves and allowed five goals before he was pulled at the start of the third period and Semyon Varlamov made six stops in relief.

On almost any given night, Greiss has given the Islanders a chance to win when he has been in net. However, the Islanders goalie struggled on Tuesday night against the Predators.

At times it seemed like Greiss struggled to read the puck, leading to Nashville’s onslaught. It was an uncharacteristic night for Greiss, who was 7-3-0 in his last 10 starts.

Greiss was pulled at the start of the third period, with the Islanders down 5-3, in favor of Varlamov. The Russian netminder didn’t fare much better either, giving up three goals on nine shots.

“Today it was unfortunate, we couldn’t get a stop. Our goalies have bailed us out so many times this year, tonight, we couldn’t bail them out,” Islanders coach Barry Trotz said.

The Islanders indeed couldn’t help their goaltenders out either, with the team struggling to clear the puck at times and making several costly decisions.

One minute the Islanders were up 3-1 early in the second period and then several moments later they found themselves back on their heels.

There seemed to be no real reason why the Islanders quickly went from being in control to the game becoming out of control in the second. Filip Forsberg’s power-play goal 27 seconds after Cizikas scored shorthanded turned the tide.

Craig Smith’s second of the game 2:20 after Forsberg’s goal tied the game at four. Smith hadn’t scored since Nov. 7 against Colorado before Tuesday night.

A pair of goals 48 seconds apart at the end of the period put the Islanders in a 5-3 hole.

“This game is funny sometimes,” Cizikas said afterward. “That’s hockey. That’s why we play it. There’s those swings that happen and it’s just a matter of how you rebound and come out the next game.”

Despite Nashville scoring seven unanswered. the Islanders managed to outshoot the Predators 30-24 in the loss.

“We had chances too they just didn’t go in,” Anders Lee said.

“Score got away from us, but we have to just regroup here and move on.” -Anders Lee pic.twitter.com/mRHzszhkI2

Uncharacteristic of the Isles

One word thrown around a lot during Tuesday’s loss was uncharacteristic. Under Trotz, the Islanders have become known as a team that plays a strong systematic game with good goaltending.

And not one that allows a team to put up eight on the scoreboard.

“I can’t remember the last time any of my teams gave up eight goals,” Trotz said.

“Today was unfortunate. We couldn’t get a stop. Our goalies have bailed us out so many times this year and today we couldn’t bail them out.” -Barry Trotz pic.twitter.com/pRqabqIx1G

However, the focus now for the Islanders isn’t to dwell on it, but to learn and move on from it. The Islanders have a busy schedule heading into the new year.

They’ll travel to Boston to face the Bruins on Thursday before returning to Nassau Coliseum to host the Anaheim Ducks on Saturday afternoon.

“We can’t do anything about getting this game back,” Trotz said. “We have a real big test in Boston. If we’re not ready for Boston then they’ll get eight on us. You just have to let it go. You tear it up a little and move on.”