Three Takeaways: Kuhnhackl was ‘dancing’ vs. Pens in Game 1 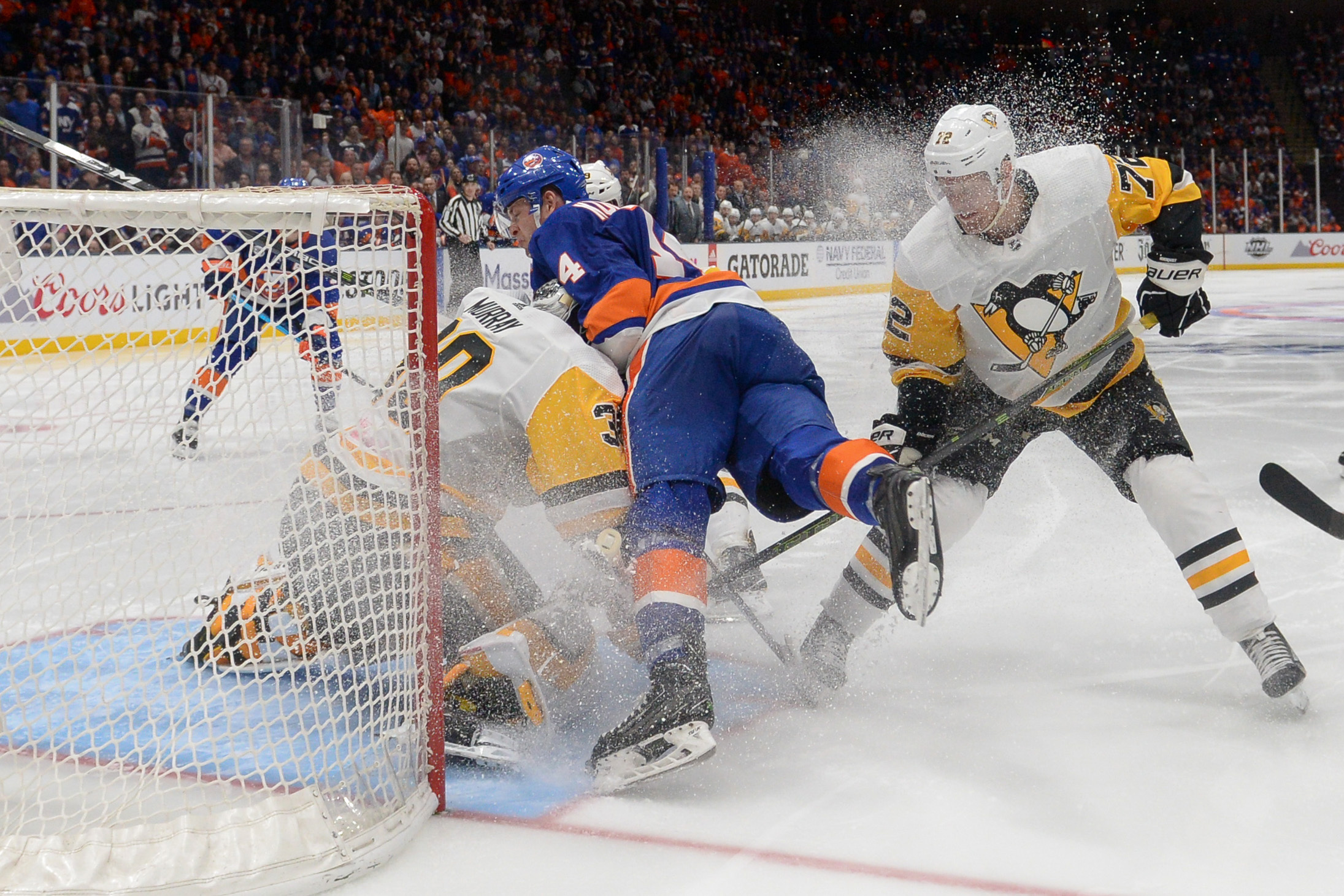 UNIONDALE, N.Y. — The Islanders took the opening game of their first-round series with the Pittsburgh Penguins, 4-3 in overtime. Josh Bailey’s rebound tally at 4:39 of overtime was the game-winner in a drama-filled night.

Tom Kuhnhackl finished the night with one shot on goal, 17:42 of ice time and no goals, but it’s hard not to like what you saw out of number 14 on the Islanders roster.

First, there was the near goal, Kuhnhackl had 33 seconds into the game on Wednesday night. If it wasn’t for the play being offsides — deemed as such after a lengthy video review — then it would have been Kuhnhackl who would have been the Islander to put his team in front by one early on. The former Penguin was able to create some space between himself and the defenders before ripping a shot from the edge of the left faceoff circle.

A hard-driving Kuhnhackl nearly scored in the second period, but alas he had another goal waved off.

“He was dancing, he was skating,” Islanders coach Barry Trotz said. ” The one thing about Tommy is he’s got two rings with that team across the hall. There’s a reason he’s been part of two cup contenders. … When the moments big he knows how to be big in that moment. I’ve seen him a lot, obviously on the other side, and I’m fortunate when we were trying to build this we were looking for people like Tommy for these moments

“I thought he was outstanding tonight.”

It wasn’t just the offensive opportunities he helped to create, but it was also Kuhnhackl’s play without the puck. He finished the night with four hits and two of the Islanders’ 17 blocked shots.

“Not a surprise to us. We see him every day in practice,” Bailey said. “He competes his balls off. Blocked shots, kind of does everything for us. Didn’t get rewarded tonight, but good things come for him for sure.”

A lot was made of the Islanders’ offensive struggles heading into the playoffs, in particular, the lack of scoring they were getting from their top six players. Well, that wasn’t an issue in Game with the Islanders receiving goals from three different top six players, including the game winner.

It started with Jordan Eberle’s goal 1:40 into the first period and then moved to Brock Nelson’s power-play goal later on in the opening frame. Also included in that was Bailey’s overtime winner, which was assisted by Mathew Barzal.

It wasn’t that just the top six forwards scored, but they helped create a number of chances that led to goals. It was Eberle’s nifty move and pass to Nelson that set up the power play goal in the first period.

And it was Bailey who forced Kris Letang to make a mistake in the offensive zone. The pass to Barzal up ice, which set up a chaotic moment in overtime.

“They’re playoff games, the last 15 or 20 games,” Eberle said. “I thought I played well and I wanted to bring that into the playoffs. They’ve have come few and far between for me making it to the postseason here. The last time it didn’t go too well personally, so I wanted to take advantage of this.”

The Islanders scored on the power play

New York’s 33 power play goals during the regular season were one of the fewest in the NHL, but on Wednesday they took advantage of their power play chances. The Islanders went 1-for-2 on the man-advantage in the opening game of the series with Pittsburgh, an important feat for a team that struggled with this aspect of their game.

“We were even in the specials teams and that’s what you want. I’m always encouraged,” Trotz said.

The Islanders power play goal came 24 seconds into the man-advantage midway through the first period.

“We had some struggles in the regular season,” Barzal said about the Islanders’ power play. “They have a good PK there, aggressive. … It was good confidence in the first game to get a power-play goal.” 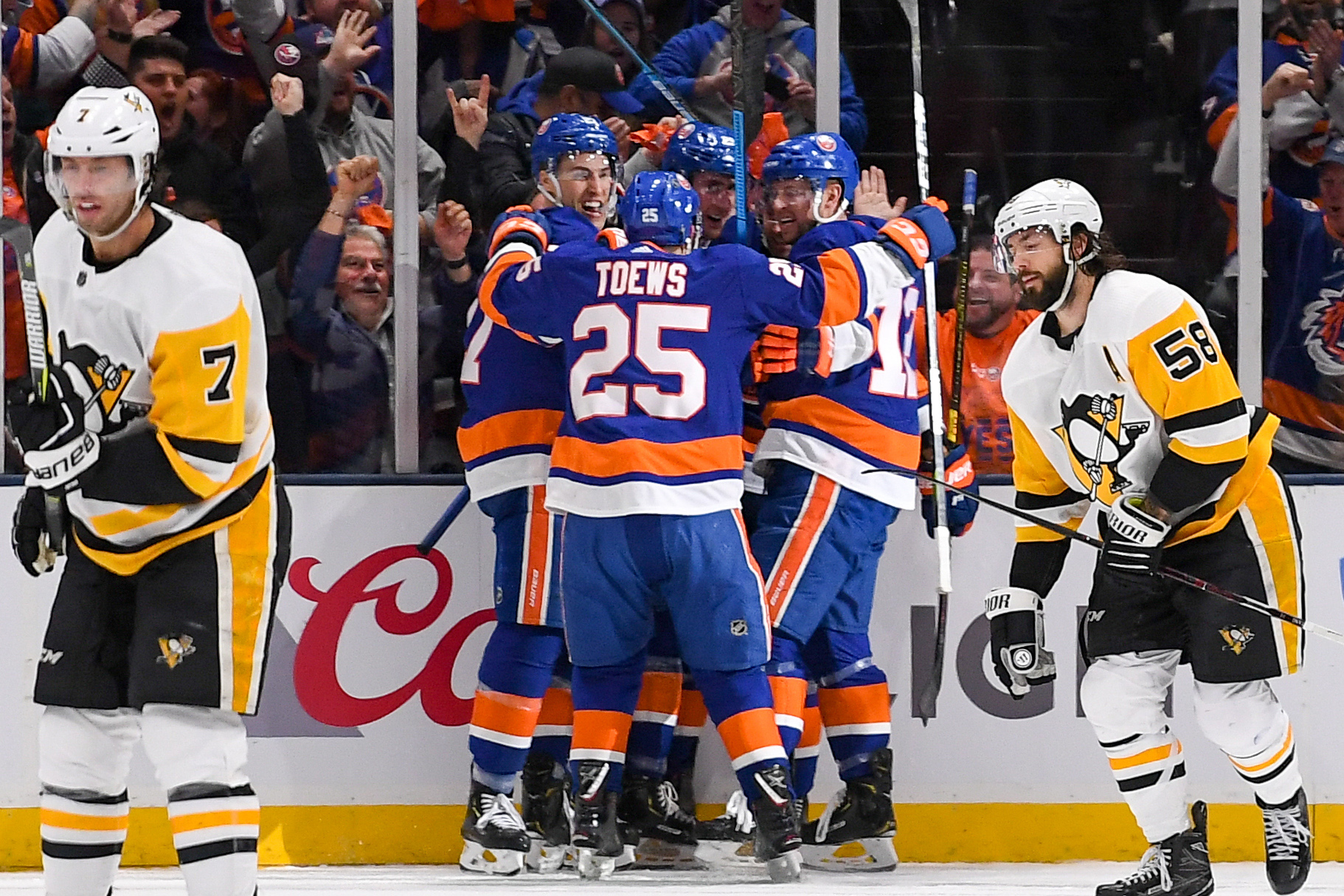