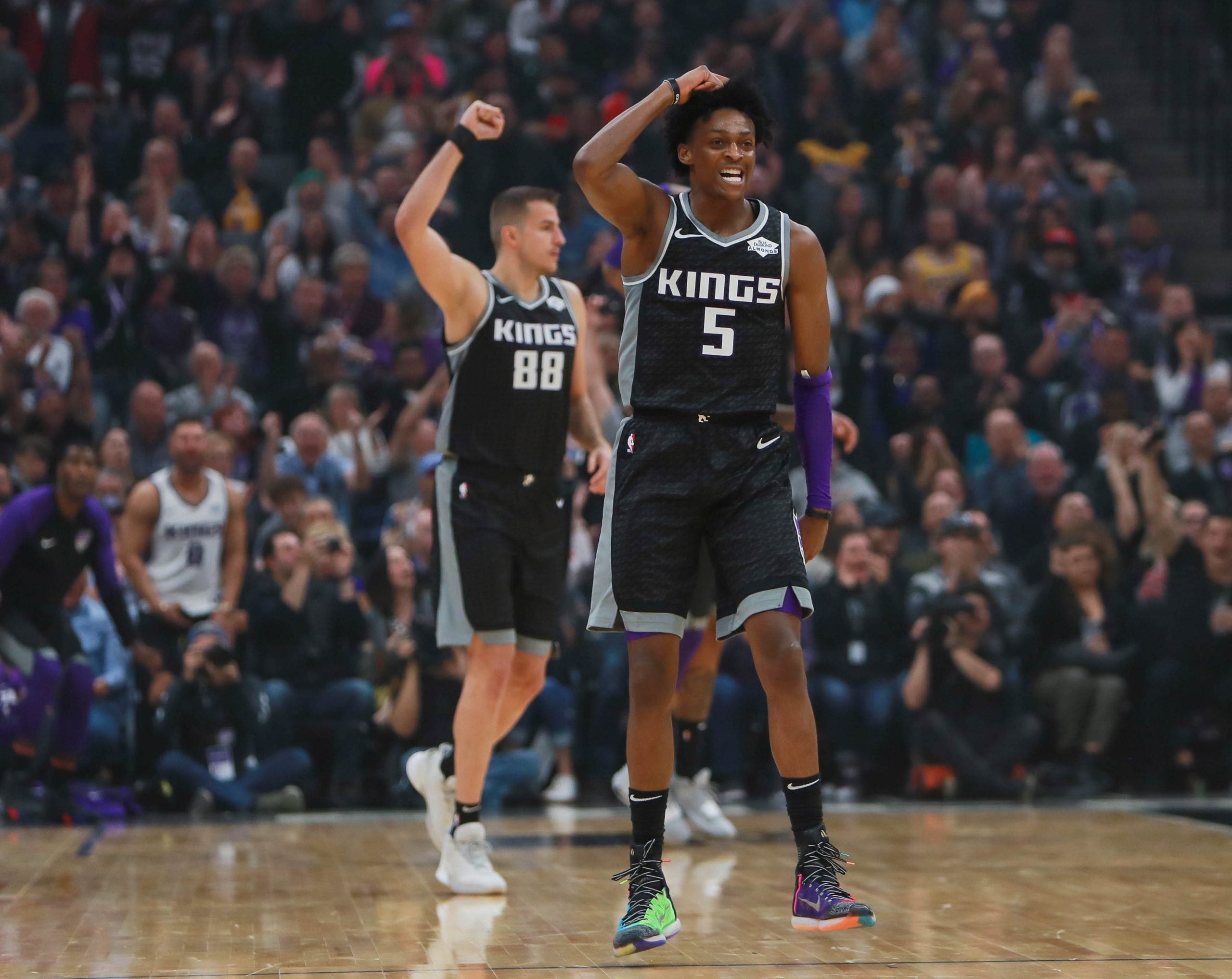 The Kings hit the ground running coming into this season and have shocked the entire NBA with an 8-6 record. Though this might not seem too impressive, the expectations on Sacramento were not particularly high, making this an exciting time to be a Kings fan.

The Kings have played like a well-oiled machine in transition but most of their early success can be credited to their point guard De’Aaron Fox.

Fox has been doing it all on both ends of the floor. The No. 5 overall pick in the 2017 draft is showing exactly why the organization has such lofty expectations for him.

For a second there, Fox left some fans questioning the draft decision during his rookie campaign. With Sacramento in dire need of a franchise cornerstone, the pressure was put on Fox right away to be the face of the franchise and hopefully lead the team out of their exile from the postseason.

Fox played well as a rookie, but it was not enough for Sacramento fans as they watched other rookies like Jayson Tatum, Ben Simmons and Donovan Mitchell have their way with the league. Even teammate Bogdan Bogdanovic, arguably had a better rookie season than Fox.

At first glance, Fox’s numbers are nothing to gawk at, but once compared to other rookies, Fox did not keep up with them.

In comparison to all the other rookies, Fox shot poorly and played inconsistent. Bogdanovic did not help Fox’s case. His numbers do not seem better, but Bogdanovic played as a better leader on the floor, could shoot better and was more consistent.

One upside to Fox that made him stand out during his rookie year was his ability to perform in the clutch. Fox had several shots to win the game or force overtime in the final seconds of the game. Bogdanovic was clutch in his own right as well, and the two made a scary duo in crunch time.

Here is one of Fox’s clutch shots during the course of his first year in the league. This was his second clutch moment against the Miami Heat, as he had a put-back dunk to beat the Heat in South Beach back in January.

Fox’s play has improved drastically, so much so that he has been Sacramento’s best player and the catalyst to their early success. Not only do his stats look impressive, but he’s looked very comfortable in a leadership position, which is something this team lost when they traded Garrett Temple away during the offseason.

According to the table above, the team plays better both on the offensive side and defensive side when Fox is on the floor. Their offensive rating and field goal percentage go up while their opponents’ plummets. Fox is so valuable to have on the court, and although the Kings do not necessarily struggle without him, they are more in tune when he is out there running the point.

Fox is putting up All-Star numbers and is pushing the ball up the floor with his young team on every play. With this, the Kings are just second to the Hawks in pace of play. While the Hawks have a 107.00 PACE, the Kings are right behind them with a 106.75 PACE.

Sacramento has a relatively youthful team and they are using their young legs to keep outrunning their opponent late in the game. Fox can go from 0-100 really quick, leading to quick layups or easy assists as the team transitions up the floor with him.

Fox has also developed a strong pick and roll game with Willie Cauley-Stein. Willie himself is having a breakout season, but he can attribute a lot of it to Fox.

Cauley-Stein sets the high screen giving Fox the ability to either drive to the rim, pull up or dish it out back to the roll man for either the jump shot or alley-oop. The two are developing a nice bond and should continue to use this strategy throughout the season.

Here is an example of Cauley-Stein and Fox running the pick and roll. Although Mitchell does not run into Cauley-Stein, Willie still rolls to the basket where Fox gives him a nice pass in the paint where Willie finishes with the layup.

Fox has drastically improved in every major category excluding free throw percentage. Most notably his shooting percentage and points per game. While Fox only shot 41.2 percent from the field last season, he is up to 50.8 percent this year.

Fox is more comfortable shooting the elbow jumper whether off a screen or in transition. His shot always looks smooth from this spot on the floor and defenses have to respect his jumper, which allows him to get to the rim better.

On top of this, Fox has added in a step back jump shot to his repertoire. Although it is not his go to move, it looks like it can be a key component in his game moving forward. He drives to the basket and right when the defender is ready to guard the paint, Fox steps back and hits a clean shot with plenty of room in front of him.

The greatest improvement to Fox’s game is the fact that he is shooting the long ball at 44.2 percent. Last year and early on this season, Fox struggled behind the arc and his shot looked nothing like the one he takes from the elbow.

Something must have clicked though because he looks as confident as ever shooting the trey. Whether on a pull up in transition or a wide-open spot up, Fox’s shot looks smooth and confident. In a league where the 3-pointer is becoming a necessity, Fox’s rookie campaign showed that he might not be able to adapt. He has turned it around so far this season and is now a threat.

Fox has also boosted his assist total from 4.4 a game last season to 7.1 a game this year. The way he pushes up the ball in transition makes it easy for him to find the open man on the fast break.

His improvement in the pick and roll has also helped him increase his assist total. Fox is a great ball handler and the way he can dribble through traffic and draw the second defender allows him to find his unguarded teammate for the open look. His court vision has improved radically and his teammates are there to thank him for it.

He is not afraid to make contact and has finished through hard fouls scoring the and-one multiple times this season. He can also finish with finesse, banking the ball off the perfect part of the glass to score over the outstretched hands of a defender. His speed and ball handling ability are great assets in getting inside the paint. He is a defensive nightmare and the young product is still only getting better.

What Fox can do on the offensive end, he does not lack on the defensive side. Fox always puts pressure on his man, usually guarding him once the ball is inbounded and full court pressuring him. He has a knack for intercepting passes and never allows an easy bucket. Fox is a two-way player and the ceiling of his potential looks limitless.

Where does all of this leave Fox compared to the rest of his draft class and sophomores in the NBA?

Fox is arguably having the best season out of any of these players. The combination of his scoring, rebounding and passing is the reason that Fox can become the best player from his rookie class. Fox is playing so well that he does not even have to be limited to being compared to his fellow sophomores. The Kings’ point guard is playing at a high level and can be equated to NBA All-Star guards.

In only his second year, Fox is putting up numbers that are close or better to those All-Stars.

It must be a thrill for Kings fans to see Fox’s name being compared to the likes of former MVPs in their sophomore year. If he can keep getting better each year, there will be no doubt that he will have an illustrious career.

De’Aaron Fox has given Sacramento hope once again. In a city where the phrase “playoffs next year for sure” has been used for over a decade without a postseason appearance since 2006, Fox gives the Kings a legitimate shot to take them to the promise land soon.

He has improved in all areas of the floor and seems to keep getting better. The Kings are playing great with Fox running the team and is arguably the best player in his draft class. He is truly developing into the franchise cornerstone that Divac expected when he drafted him.