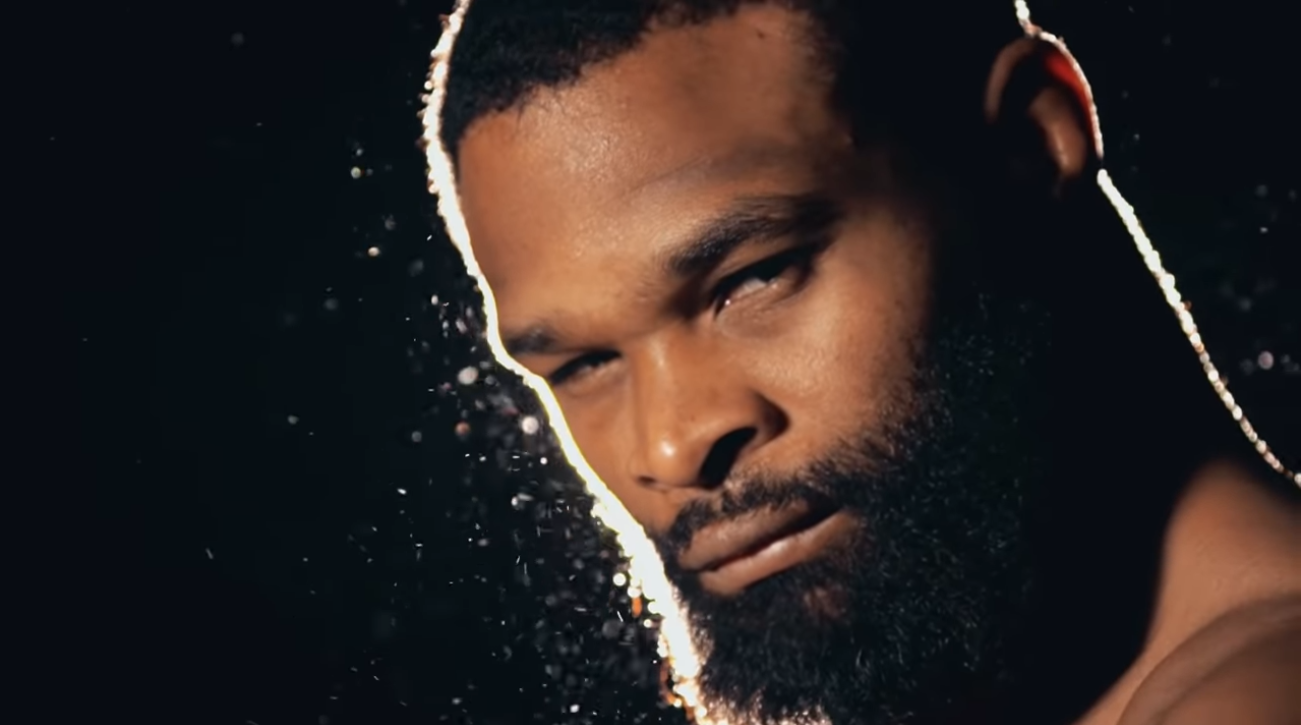 In 2015, Dana White made a promise to Tyron Woodley.

Unlike previous vows that women would never compete in the promotion or that Pride and Strikeforce would continue to run ‘business as usual’ after Zuffa acquired them, the UFC president kept his word to ‘The Chosen One’.

All it took was a heaping teaspoon of perseverance, a cup-and-a-half of ability, several glugs of being a company man and a pinch of luck.

After being picked apart by Rory MacDonald, Woodley needed to do something extraordinary to prove he was worthy of competing for that coveted golden strap.

The rebuilding began in the co-main event of an underwhelming China card that did not exactly capture the attention of Western audiences. His opponent, Dong Hyun Kim was aboard the hype train after securing the UFC’s first-ever spinning elbow KO in his last outing. Woodley swiftly derailed him with a first-round flattening.

For his sins, Woodley was then matched up with undefeated rising star Kelvin Gastelum. He would have been forgiven for not taking that bout after Gastelum weighed in 9 pounds over the upper welterweight limit. However, Woodley took a split decision victory and handed Gastelum back the portion of the purse he was forced to forfeit to him

Woodley’s next scheduled dance partner, former champion Johny Hendricks, went to the hospital instead of the weigh-ins. A botched weight cut left Hendricks with an intestinal blockage, kidney stones and in the promotion’s bad books.

Dana White announced shortly after that Woodley would get his shot without having to win a title eliminator. That is how, after 546 days of inactivity, while riding only a two-fight win-streak, Woodley took on Robbie Lawler for the undisputed UFC welterweight championship. 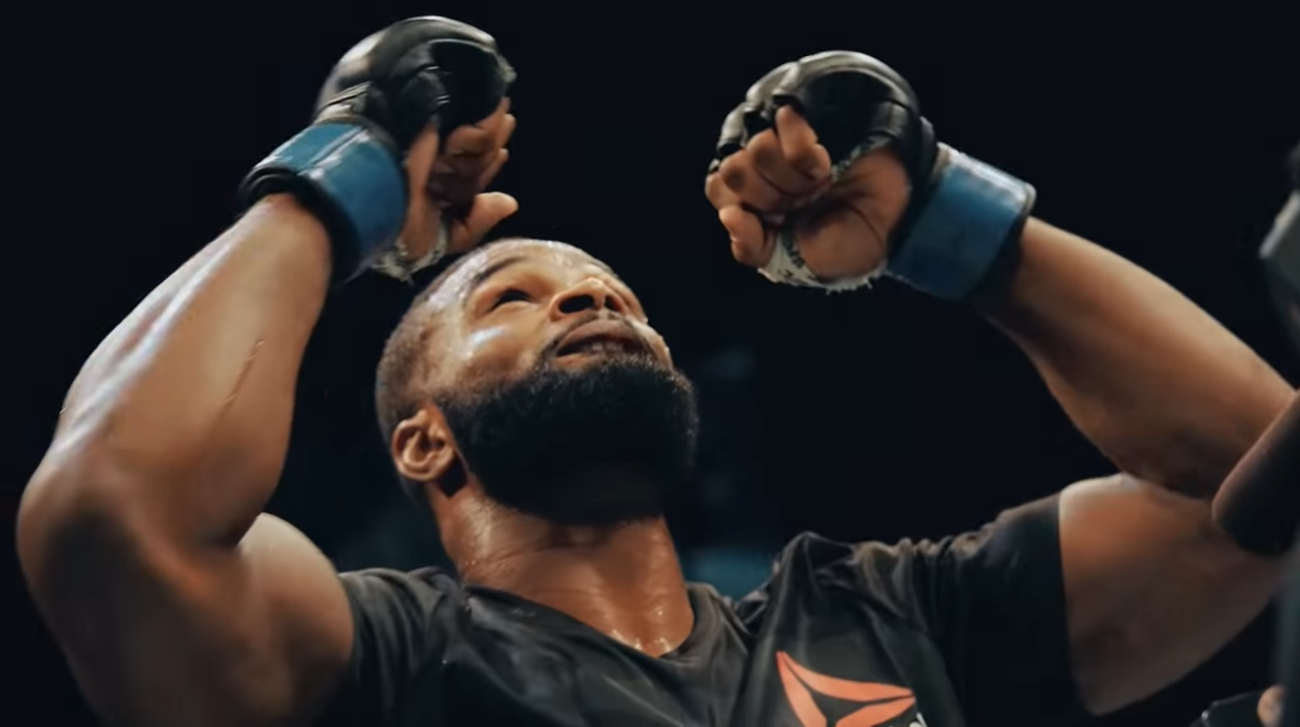 It gets cold at the summit

Woodley’s lightning-quick dethroning of Lawler was sandwiched between two behemoth events – the super-stacked UFC 200 featuring the drug test controversies of Jon Jones and Brock Lesnar and, the PPV record-breaking UFC 202 headlined by the rematch between Conor McGregor and Nate Diaz. It was a relatively quiet peak to a relatively quiet ascent for Woodley. His first defence, however, would be a hell of a lot louder.

Later that year, Woodley got the opportunity to play second fiddle to the biggest superstar in the sport on the UFC’s New York city debut. The state’s MMA ban was lifted and all eyes were on McGregor as he successfully became the first UFC fighter to simultaneously hold belts in two different divisions.

The very same eyes also witnessed Woodley and Stephen Thompson claim fight of the night honors for their majority draw in the co-main event. However, Wonderboy was not the opponent he wanted for his first defence and, despite the result, he certainly was not his preference for his next one.

Woodley wanted money fights against transformative stars like Nick Diaz and Georges St-Pierre. That rubbed fans the wrong way as he had unfinished business with Thompson. The bitter irony is their rematch would come on UFC 209, the Stockton area code and mantra of the Nick Diaz army, who was sorely missed on the event.

To make matters worse, it was an absolute borefest. Fortunately for Woodley, he claimed majority decision and the chance to wipe that night from everyone’s memory with another defence of the title.

Unfortunately, for Woodley, that opportunity came against streaking Brazilian Jiu-Jitsu master Demian Maia. Woodley tore his shoulder en route to a lackluster unanimous decision victory over the Brazilian. Dana White was so unimpressed with his performance, he announced in the post-fight press conference that it had cost him his dream bout against GSP. Instead, Michael Bisping would be tasked at welcoming the Canadian superstar back to the Octagon.

Disgruntled by his supposed promoter’s criticism, Woodley demanded an apology from White. During an appearance of The MMA Hour, he threatened to, ‘start leaking some shit that people don’t want to be out in the wind,’

It was a bad look for both parties, but the beef was swiftly resolved behind closed doors. 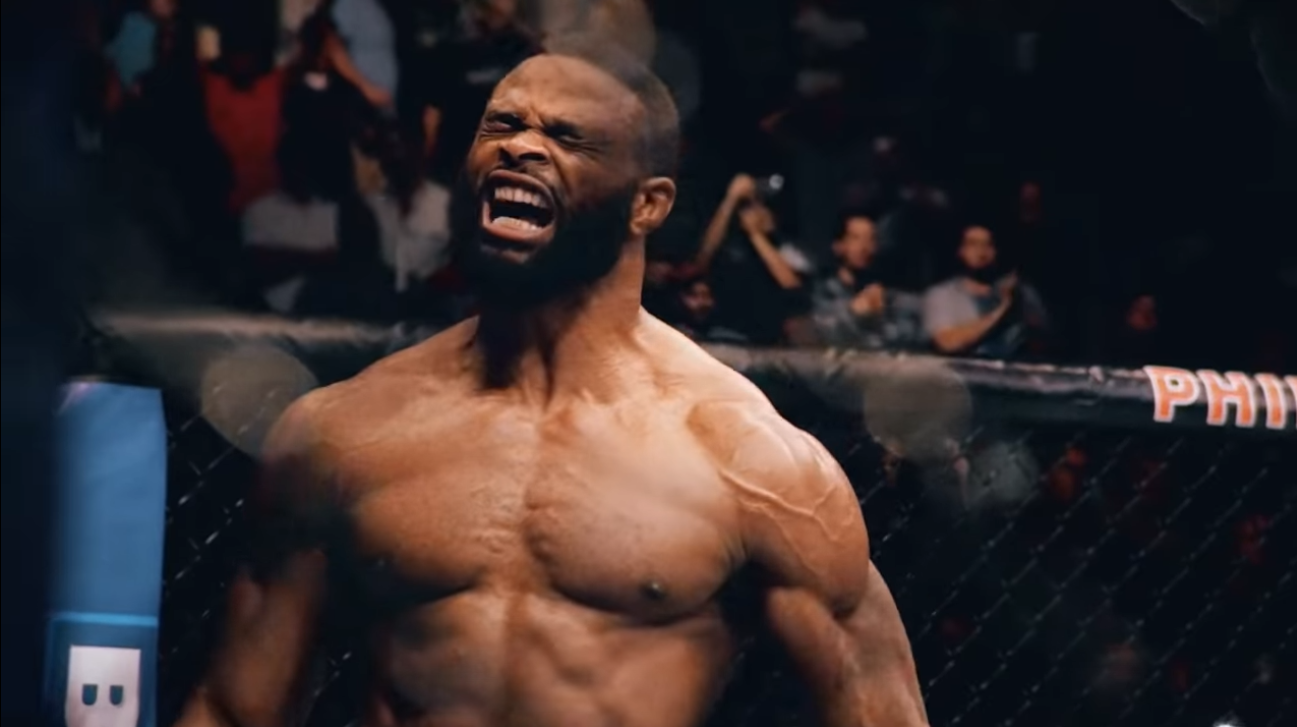 Fans turned on Woodley during his reign as champion. They did not like his desire to pass over top contenders to secure prizefights. They hated his claims of being the ‘worst-treated champion in UFC history.’ And, they certainly despised how he transformed from a contender amassing highlight-reel knockouts to a champion who always went to the judges’ scorecards.

Then the tide started to turn.

His next defence came against a brash, undefeated star with a charmingly indecipherable Liverpudlian accent. Darren Till was on a rocket ship to the moon before Woodley dragged him back down to Earth.

Woodley outstruck the Englishman by 74-1 before squeezing him so tight with a D’Arce choke that he briefly resembled Chael Sonnen. Woodley outclassed the challenger but had a very subdued reaction. He only showed emotion when his head coach Din Thomas awarded him with his BJJ black belt in the cage after the win.

Thomas gave a rather sobering interview with ESPN which explained Woodley’s muted celebration.

“You become champion, best in the world, and you think you’re going to get this adulation from the community and the world – and for him, it seemed to get worse. It really frustrated him.”

“He thought everybody was going to appreciate him, and it was like, people hated him.” 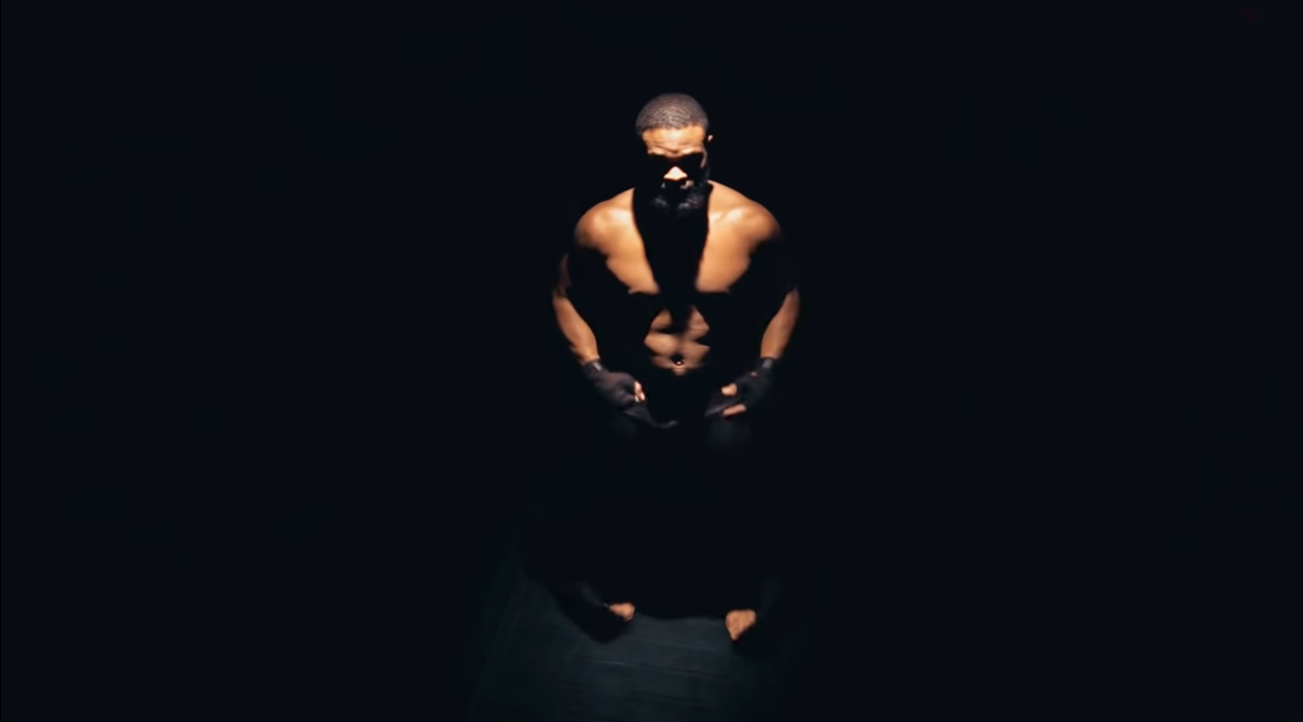 Suddenly, Woodley was the media darling he always strived to be. He had his signature win as a belt holder against Till. The promotion was getting behind him by promoting his upcoming rap song ‘I’ll Beat Yo Ass’ featuring Wiz Khalifa. And, he had another big bout lined up against a legitimate villain in the form of the MAGA hat-wearing troll, Colby Covington.

Former interim champion Covington was briefly linked with a title unification bout with Woodley. However, nasal surgery saw the promotion opt for Till instead.

Woodley’s rap releases were not well-received. They were derided by keyboard warriors and rival fighters alike.

Also, the Covington grudge match never materialized. Instead, another company man who was quietly doing solids for the promotion was given the call. Kamaru welcomed short notice replacements, headline slots on TUF finale and South American fight night cards. He earned enough brownie points to overtake Covington in the contendership queue.

Kamaru Usman, undefeated in the UFC and riding a 13-fight win-streak, soundly usurped Woodley’s throne. None of the judges scored a single round in Woodley’s favor. He was not going to get a title shot anytime soon.

He later admitted on the Ariel Helwani MMA Show that his splurging as UFC champion took its toll on his bank account. Bluntly put, he, ‘blew all his fucking money.’ 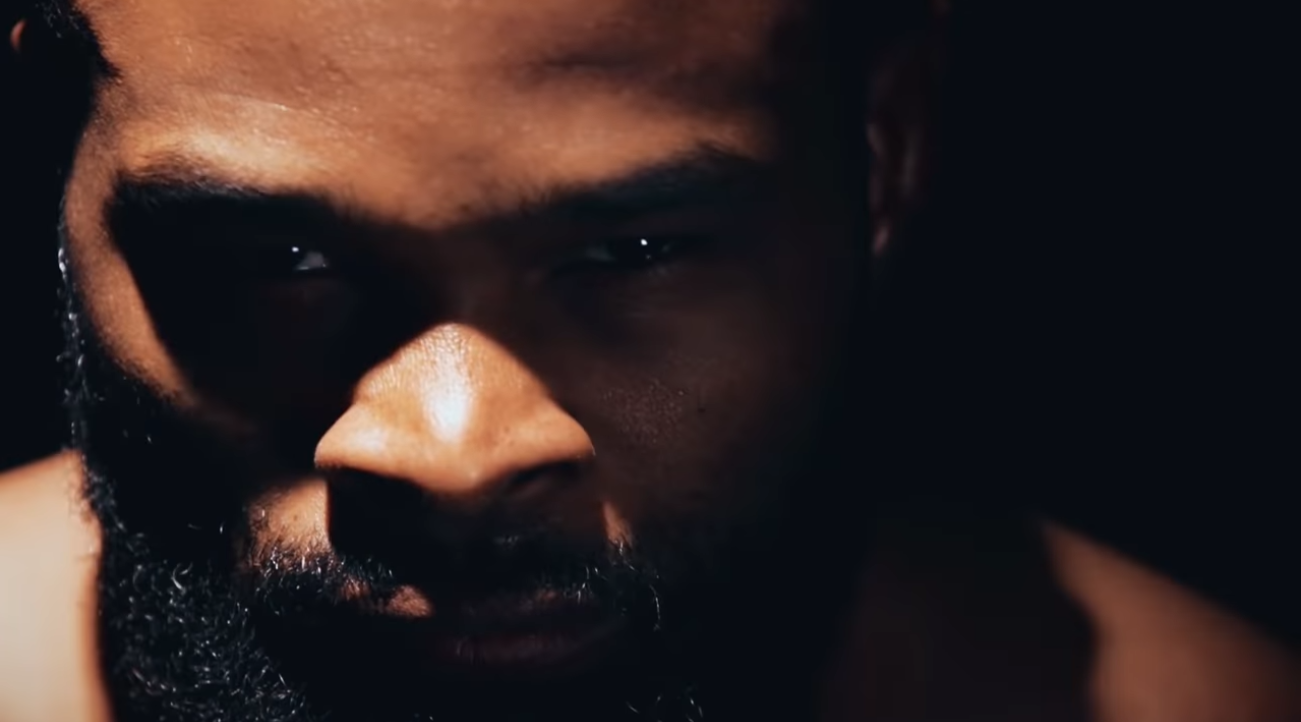 A hand injury forced him out of a scheduled rematch against Lawler. And then he was booked to fight Leon Edwards in London, a streaking fighter whose lack of media exposure leaves him as one of the least visible contenders in the division.

The COVID-19 pandemic saw UFC London cancelled and Woodley was rebooked against Gilbert Burns, who put on a beatdown that was reminiscent of the one Usman laid on Woodley.

You count fighters out at your peril in this crazy game, but 38-year-old Woodley seems unlikely to recapture his glory days at the zenith of the 170 lb division. The business end of the division looks very different from its iteration when he was at the peak of his powers.

And even if he were to claw his way back, would he even allow himself to enjoy it?