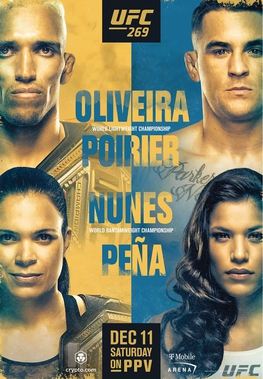 Luke Irwin: The uncrowned champion, Poirier, takes on the underdog champion in Oliveira. Do Bronx is a dogged finisher who has a superb ground game and a late-developing strong striking game. Poirier is incredibly polished and doesn’t have any true weaknesses. Oliviera’s path to victory should be to lure Poirier into a brawl, score a knockdown, and finish him on the ground. Easier said than done. Poirier is an incredibly smart fighter who isn’t going to be brawl just for some extra cash or a good time. He also is adept defensively and has a great chin. Thirdly, he’s very proficient on the ground and won’t be easy pickins like Bronx’s other conquests. As much as these two detest going to the judges’ scorecards, they’re too evenly-matched to think they won’t. Poirier via SD.

Luke: I know the well isn’t nearly as deep as men’s lightweight, and Pena is a fine challenger I guess, but still, meh. Every Nunes fight is either sudden horrific violence or if she’s bored, a plodding playing-with-her-food affair. Pena isn’t going to show Nunes a single goddamned thing she hasn’t seen and swiftly dealt with before. I think this will be a disinterested Nunes until she’s seen enough and puts Pena down humanely in the championship rounds. Nunes via R4 TKO.

Luke: I’d point out Neal’s recent problems with the law, but as we’ve seen time and time again, that seldom seems to bother fighters. This will be a clash of striking styles, as the more active Ponzinibbio will battle the more precise Neal. If this does go to the cards, the judges always favor action, no matter whether it has any effect on the opposition. Ponzinibbio via SD.

Luke: Yes, the Hail Mary knockout of Raphael Assuncao was outstanding. But people forget that Garbrandt was getting it fed to him before that. If that fight continues how it was going, that would be, as of now, five straight losses for Garbrandt. His footwork is still awful, his defense is atrocious. If Kara-France is smart, measured, picks his spots, and doesn’t stick his neck out too far, it’s his for the taking. Kara-France via UD.

Luke: There’s no reason why O’Malley can’t keep Paiva at bay with his reach and striking, and wait for an opportune moment, either Paiva shoots or leaves an opening, to put him down. O’Malley via R2 KO.