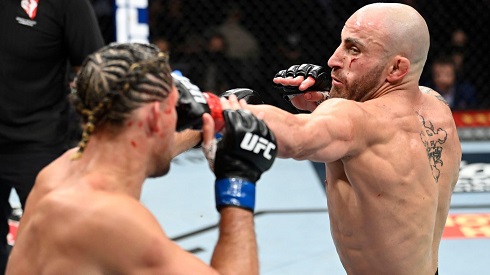 UFC 273 is live from the VyStar Veterans Memorial Arena in Jacksonville, Florida on Saturday April 9, 2022.  Headlining the Main Event is current UFC Featherweight Champion Alexander “The Great” Volkanovski (23-1-0) taking on former title challenger Chan Sung Jung (17-6-0), also known as the Korean Zombie. Below, I’ll break down the UFC Fights this weekend and give the best bets for UFC 273 Volkanovski vs Korean Zombie

UFC 273: Volkanovski vs Korean Zombie | How to Watch the UFC Fights Tonight

Alexander  “The Great” Volkanovski opened up as the favorite at -330, with the comeback on Korean Zombie at +270. The majority of action has been on Alex “The Great” moving his line all the way out to -800 and the Korean Zombie at +500.   The full breakdown of odds from BetOnline can be seen below:

The top sportsbooks in the US have set the total rounds at 4.5 with the odds favoring the over, suggesting that this fight will go to decision. These two Featherweights have shown to be quite durable. Will they go to decision in a 5 round fight?

In order to properly breakdown the UFC fights this weekend, we will have to take a deeper dive into this matchup. 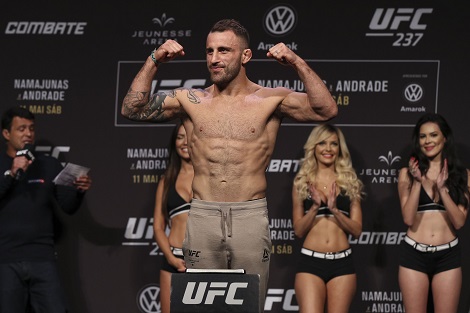 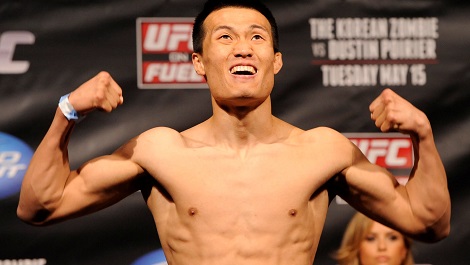 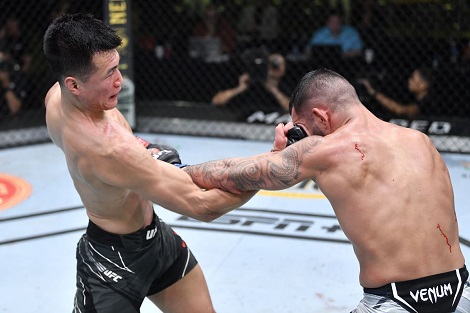 Can The Korean Zombie turn the tide and pull off the huge upset?

Born in South Korean, Chan Sung Jung, is a striker who has been fighting professionally since 2007 and entered the UFC in 2011. Since joining the UFC, Jung has gone 7-3, with 6 of those 7 wins inside the distance. Called the Korean Zombie as he fights coming forward, even after taking damage, almost zombie-like. Although his nickname suggest that the Korean Zombie takes a lot of punishment, he absorbs an average of 3.87 strikes per minute, while landing 4.07 strikes per minute. Mostly a striker, The Korean Zombie averages 0.82 takedowns every 15 minutes, but with a 47% takedown accuracy. Against his opponents, he defends 77% of takedown attempts. Although Jung landed 3 takedowns in his most recent fight against Dan Ige, he had not landed a takedown in the 6 previous fights before that.

Will Alex Volkanovski retain his title?

Alexander Volkanovski has not lost a fight since entering the UFC in 2016 and has gone 10-0, against some of the top Featherweights in the world. Before joining the UFC, Volkanovski fought as a professional boxer. Known for great cardio, Volkanovski can push a pace landing 6.42 strikes per minutes, while absorbing 3.34. Not just a boxer, Volkanovski landed 16 takedowns in his first 5 UFC fights. However, in his last 5 UFC fights, he’s only landed 3 for an overall average of 1.77 takedowns per 15 minutes at 34% accuracy.

Before I give away the best bets for UFC 273, let’s take a look at how these two fighters have looked in their previous fights.

Physically Chan Sung Jung will have a 1″ height and reach advantage and will be 1 year older. Currently the odds are -800 for Volkanovski, and honestly, I understand why. Jung has lost to their common opponents in Jose Aldo and Brian Ortega, whereas Volkanovski has won against those same opponents. Volkanovski was able to dominate and survive submissions attempts from one of the most dangerous submission artists in the division in Brian Ortega. Volkanovski was also able to beat one of the greatest Featherweight Strikers twice in Max Holloway. There isn’t much Volkanovski hasn’t seen already in the Korean Zombie. I for Jung to win, he has to clip Volkanovski with something unexpected, which has yet to happen in Volkanovski’s 10 UFC fights.

There may have been a little bit of value on Volkanovski at his opening line of -350. However, at his current line of -800, I think the value is all gone, and I would suggest not playing his moneyline, so we will have to look for a creative way to approach this fight. Volkanovski by decision is the most likely outcome of the fight, but I wouldn’t lay the juice at -150. If you can find Volkanovski to win by unanimous decision at +125 at some offshore books, that might be worth a play.

My UFC Best Bets articles are currently 5-2 with a profit of 2.3 units. If you are looking to bet this fight, my best bet is:

You can find this line over at BetOnline by using the link below. The Point spread bet means that if Volkanovski wins by decision, he needs to win by at least 6 points on the judges scorecards (49-46, 48-47, 49-46) is 7 points. If Volkanovski wins inside the distance, then we also win. We are basically getting -275 on a -800 favorite.