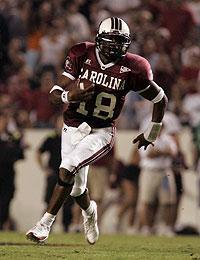 Our Prediction this week as South Carolina returns home from a blow out lose to Auburn last saturday on national TV.

Why to watch: While Vanderbilt is sure to throw its hat back in the ring, this might be a battle to see who finishes last in the SEC East. South Carolina has seen its SEC season go from bad to worse with an 0-3 start punctuated by what Steve Spurrier described as one of the worst losses of his career in last week’s 48-7 drubbing by Auburn. With Vanderbilt coming up next week, the Gamecocks have a great chance to turn the ship around before facing Tennessee. Kentucky is still looking for its first win this season over a D-I team, and with Ole Miss and Mississippi State ahead, it has the potential to go on a great run with an upset win in Columbia.
Why Kentucky mmight win: The return game. Don’t knock it; when teams are struggling to generate consistent offense, a few big returns can change the game around. The Wildcats have been excellent in the return game averaging 34 yards per kickoff return and 20.7 yards on punt returns. By comparison, the Gamecocks are averaging 20.74 yards on kickoff returns and 3.82 yards on punt returns. USC’s running game has yet to show up this season, so if Kentucky can tighten up at all against the pass, it has a shot at the win.
Why South Carolina mmight win: Outside of a flourish in garbage time against Florida, the Kentucky offense hasn’t done much against D-I teams this year, and failed miserable on the road in its one chance losing to Indiana 38-14. South Carolina might have quarterback issues at the moment after the injury to Blake Mitchell, but it should still be able to Cock ‘n’ Fire on a secondary that ranks 106th in the nation in pass efficiency defense. South Carolina has the nation’s 19th most efficient passing attack.
Who to watch: There’s still a question about Blake Mitchell and if he’ll be able to go or not with a high ankle sprain, but there’s still hope that he’ll be able to go after he practiced earlier in the week. If not, it’ll be back to Antonio Heffner for another week. The sophomore saw a little bit of time in each of the first four games, and then he went 15 of 23 for 133 yards and a touchdown against Auburn. That might not look too bad on paper, but he held on to the ball too long and couldn’t get the offense moving. Desperate for some sort of a running game, the Gamecocks need Mike Davis to come through. He ran well against Troy, but didn’t get much work against Auburn. Against a run defense that allows 214.5 yards per game, this is the game he needs to break out.
What will happen: South Carolina might not be smooth, but it’ll be good enough on both sides of the ball to keep UK from having its break out game. The Gamecock defense will come up with one of its better performances before letting up late.
Line: South Carolina -13
Must See Rating: (5 lock yourself in a room to watch — 1 The Adam Corolla Project) … 2.5
Fearless Prediction: South Carolina 31 …Kentucky 20