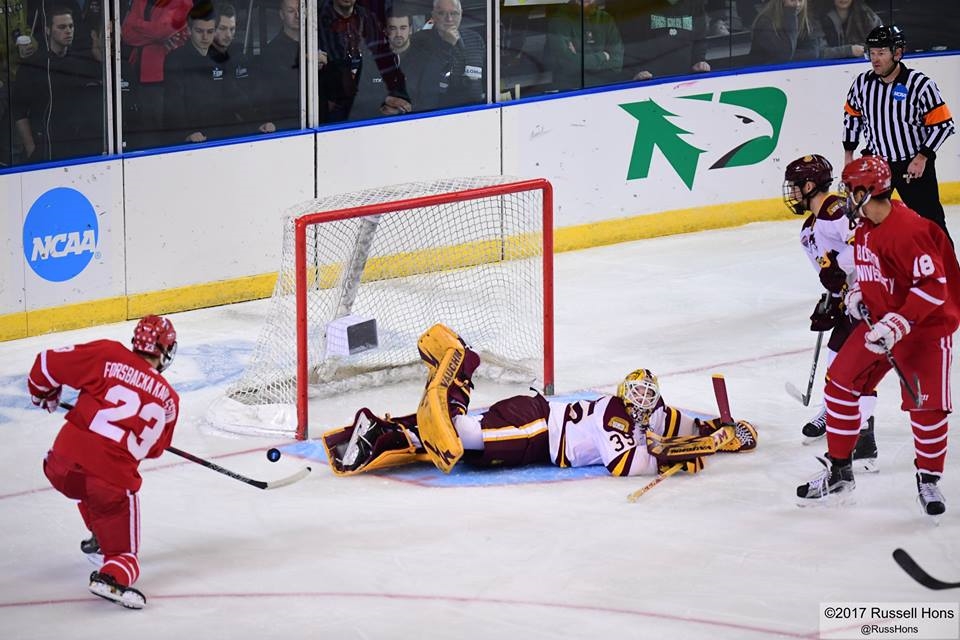 University of Minnesota-Duluth freshman goalie Hunter Miska has been an outstanding pickup for the Bulldogs. The Mike Richter Award finalist has played in 35 games this season, going (26-4-5, 2.21 GAA, .919 save percentage). The All-Conference NCHC Second Team goalie Miska also has five shutouts. Two of those shutouts were against conference foe North Dakota.

Miska has been steady in net and he seems to relish the big games. Last weekend, he led his team to an NCHC Frozen Faceoff championship. During the playoffs, Miska is (4-0-0, 2.13 GAA and .929 save percentage).

“He’s a big reason we are where we are, UMD head coach Scott Sandelin said. “Hunter was a top recruit for us. He wanted to stay three years of junior hockey because he wanted to come in and be ready. We knew he was kind of an elite guy and he was just never giving up the net. He’s got a great demeanor, he’s a competitive kid that’s very athletic, as you see. He just doesn’t get bothered.”

During the first period of the championship game, Miska robbed Terriers forward Jakob Forsbacka Karlsson on the door step. That play was typical of Miska’s weekend. All season long, he’s been there when his team needed him the most.

If you haven’t seen the play in question check it out. It’s a game saving save.

UMD goalie finds a way to make the save! #NCAAHockey pic.twitter.com/nA9MvS6UOx