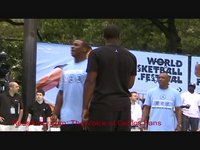 The University of Wisconsin women’s basketball team hasn’t had a lot of positive momentum over the Bobbie Kelsey era, but it does to open the 2015-16 season following a 79-65 victory over visiting Louisiana Tech.

Following a 37-36 deficit at the half, Bobbie Kelsey’s ladies took care of business and outscored the Lady Techsters 27-15 in the third quarter of action. It was enough to hold off a tough opponent to open the season, and one that will allow this veteran team to grow.

“I’m very proud of the team, this was a tough opponent,” Kelsey said following the win. “It was a good opponent for us to start out with. We knew they would come out and be aggressive and hit shots. I thought that we made some adjustments at halftime and we really came out and did those things.”

Senior guard Dakota Whyte led a balanced offensive effort with 16 points on 5 of 10 shooting. She was one of four Badgers to go in double figures on the day. The returning Michala Johnson had a great start to her final campaign, recording 13 points and and five rebounds after recovering from a torn ACL suffered early last season.

Joining those two in double figures were guard Nicole Bauman (14) and forward Avyanna Young (12), as the Badgers held a 51 percent to 30 percent lead in field goal shooting for the game.

Helping to eliminate second chances points for La Tech was guard Tessa Cichy, who grabbed a game-high 16 rebounds (12 on the defensive end) to go along with nine points on the night.

Louisiana Tech matched the Badgers starters in the scoring effort, with four players going for double figures. That contingent was led by Brooke Pumroy, who matched Whyte’s 16-point day.

However, the Badgers depth was the real difference in this game, as UW outscored the Lady Techsters 15-3 in points off the bench. A key to that effort was redshirt freshman Roichelle Marble, who added six points on 3 of 4 shooting and had two assists.

The Lady Techsters looked like they were going to give UW a massive game early in the contest, leading by seven points with just over 90 seconds to play in the second quarter. However, the Badgers responded well to end the half and start the third quarter as well.

With La Tech up 36-29, the Badgers got a bucket from Whyte and one of two free throws from Johnson to cut the score to 36-32. Young then cut the lead further with an old fashioned three-point play to make it 36-35 at the half.

UW got a jumper from Johnson to star the third quarter and lift the Badgers to a 37-36 lead. It would be all over after that, as Wisconsin never let the Lady Techsters in to a lead again.

The Badgers built an impressive lead in the third quarter, eventually pushing it to a 17-point advantage with 6:23 to play in the fourth and final quarter.

Wisconsin will take the victory and test itself on Nov. 18 against Drake at the Kohl Center. The game can be seen on BTN Plus.