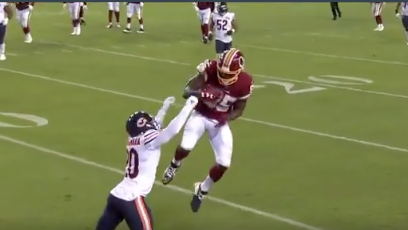 Davis scored a touchdown by hurdling an Eagles defender and then racing down the sideline in Week 1, but that appeared to be one-time deal. He attempted to do the same in Monday’s game against the Bears, and, yeah, it didn’t go well.

The Redskins tight end caught a pass from Case Keenum, then attempted to jump over Bears cornerback Prince Amukamara. The problem, for Davis, is that his counterpart simply stepped back, and Davis was left hung out to dry.