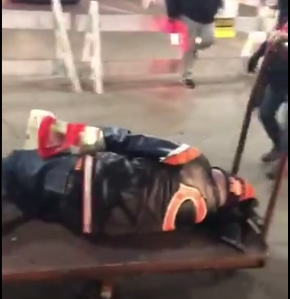 The Cowboys and Bears fans are among some of the most passionate in all of football, and they’ll go to great lengths to support their team.

For Cowboys fans that equated to making the trip to Chicago for Thursday’s game, and getting there early to partake in the pregame festivities.

As for the home fans, well, a lot of them made sure to get to Soldier Field to begin tailgating as soon as the lot opened, which was evident in some of their behavior during the game.

One particular Bears fan got so drunk that he had to be wheeled out of the stadium, as he was passed out intoxicated, and it was pretty funny.

Can’t wait for him to wake up tomorrow and find out that the Bears are alivepic.twitter.com/GhwkfmtmYD

He has great friends helping him, at least. Clever idea as well.