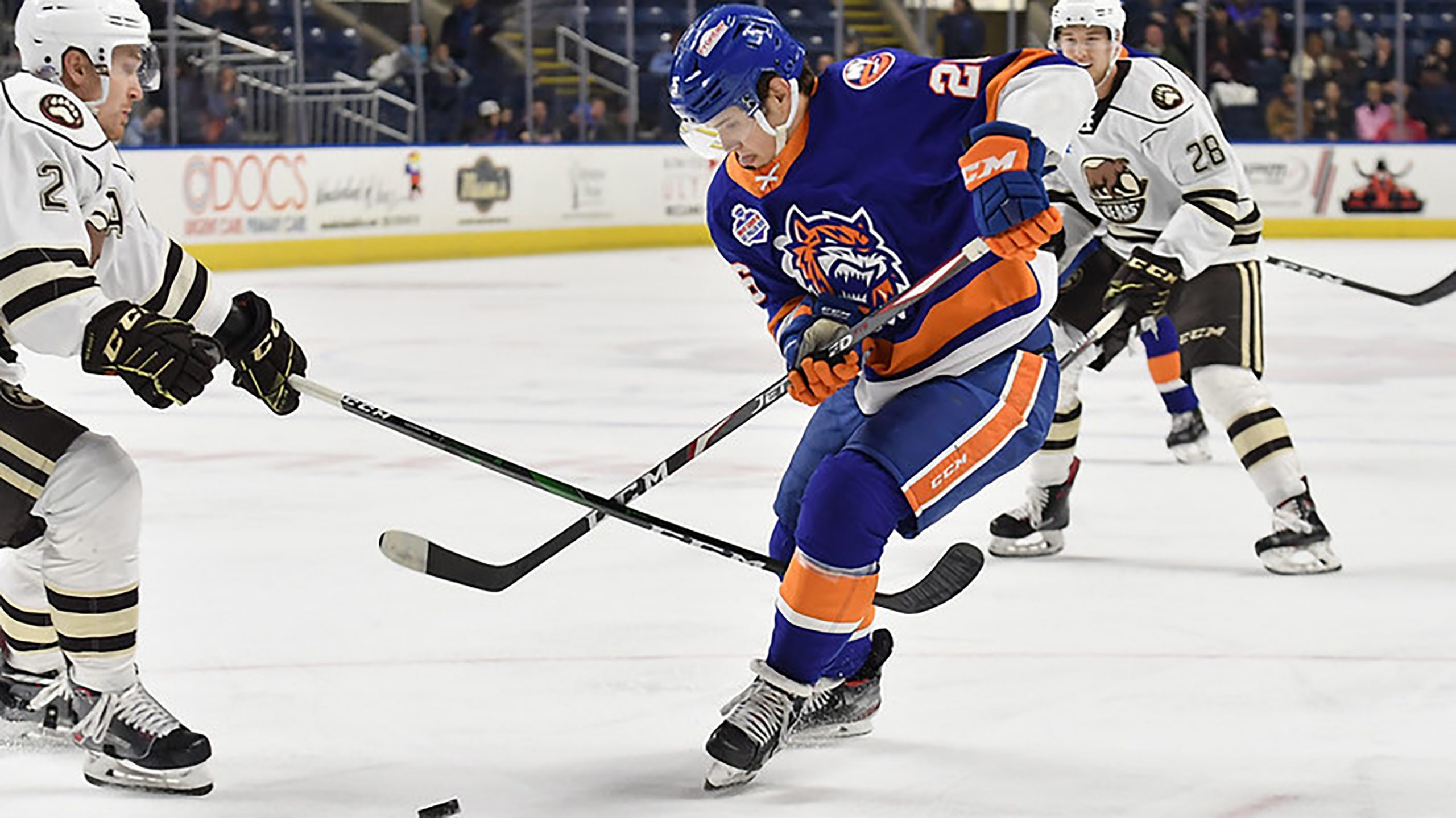 BRIDGEPORT C.T. – Oliver Wahlstrom has had a crazy season to date.

The AHL All-Star Classic break provided time for Wahlstrom to get away from hockey and collect his thoughts prior to resuming the season Friday evening. In the team’s first game back in action, Wahlstrom assisted on Kieffer Bellows’ goal, the lone tally for Bridgeport in a 4-1 loss to the Hershey Bears.

As for Wahlstrom, finding the box score has been a struggle since Thanksgiving. Courtesy of his helper to Bellows, that's Wahlstrom's fourth point in 14 games.

“It was the first time in my career I could relax for a couple days,” Wahlstrom said. “World Juniors and this season, it’s really been a lot of learning.”

After missing the New York Islanders’ opening night roster out of camp, Wahlstrom started the 2019-20 campaign in Bridgeport. It didn’t take long for the burly American-born winger to make his NHL debut, though. In fact, it was the Islanders’ sixth game of the season—an afternoon contest against the defending champion St. Louis Blues, where Wahlstrom made his first appearance.

After going scoreless in his first nine games, Wahlstrom was sent back down to the American Hockey League, ensuring the 19-year-old didn’t burn a year off his entry-level contract.

About a month later, Wahlstrom was back on the move. No, not back up to the NHL, but to the Czech Republic to represent the United States in the annual World Junior Championship.

Wahlstrom was named an alternate captain for his team prior to the tournament and had one goal, four assists in five games.

Unfortunately for Wahlstrom, the U.S. didn’t fare well and fell to Finland 1-0 in the single-elimination quarterfinals. The sixth-place finish was the worst for the red, white and blue since a seventh-place finish in 2012. It also snapped a four-year streak with a medal for the U.S.

“It’s been a rollercoaster of a season when you add in going up and down and to World Juniors,” Wahlstrom said.

Entering Friday’s contest against Hershey, the Quincy, Massachusetts native had struggled to put his name in the box score, scoring just three points in his previous 13 games. There was even a two-point performance in the mix during that stretch.

After Hershey took the lead early in the second period, Wahlstrom propelled Bridgeport back into the game with his primary assist on Bellows’ goal 37 seconds after Hershey opened the scoring to give him his first point in two weeks.

“I just tried to get the puck to the middle of the ice,” Wahlstrom said. “It bounced off a skate and came back to me. I decided to give it over to [Bellows]. He’s playing great right now and is playing hot.”

Head coach Brent Thompson was poignant after the game and wasn’t able to pick out too many positives from Bridgeport’s effort on Friday, but felt the response by that line was needed.

“We didn’t hang our heads, which is a step in the right direction,” Thompson said. “Some of our young guys are learning some important lessons right now and that was one of them. You’ve got to put your helmet back on and you’ve got to work twice as hard to get the momentum back.”

The 11th overall selection in the 2018 NHL Draft isn’t getting caught up on the numbers, though; Wahlstrom prefers to focus on his complete game.

“I think playing more of a man’s game, be attentive in the defensive zone and keep plowing away,” he said.

The Sound Tigers will need Wahlstrom and the young cast of players stepping up moving forward. Bridgeport has 30 games remaining on the schedule which ends on April 11 at the conclusion of a three-game road swing. Bridgeport is 6-17-2 on the road this season.

Tonight will be the first game that Josh Ho-Sang and Oliver Wahlstrom are in the lineup on the same night. #Isles #SoundTigers
Other notable forward prospects in the lineup:
Koivula
Bellows
Holmstrom