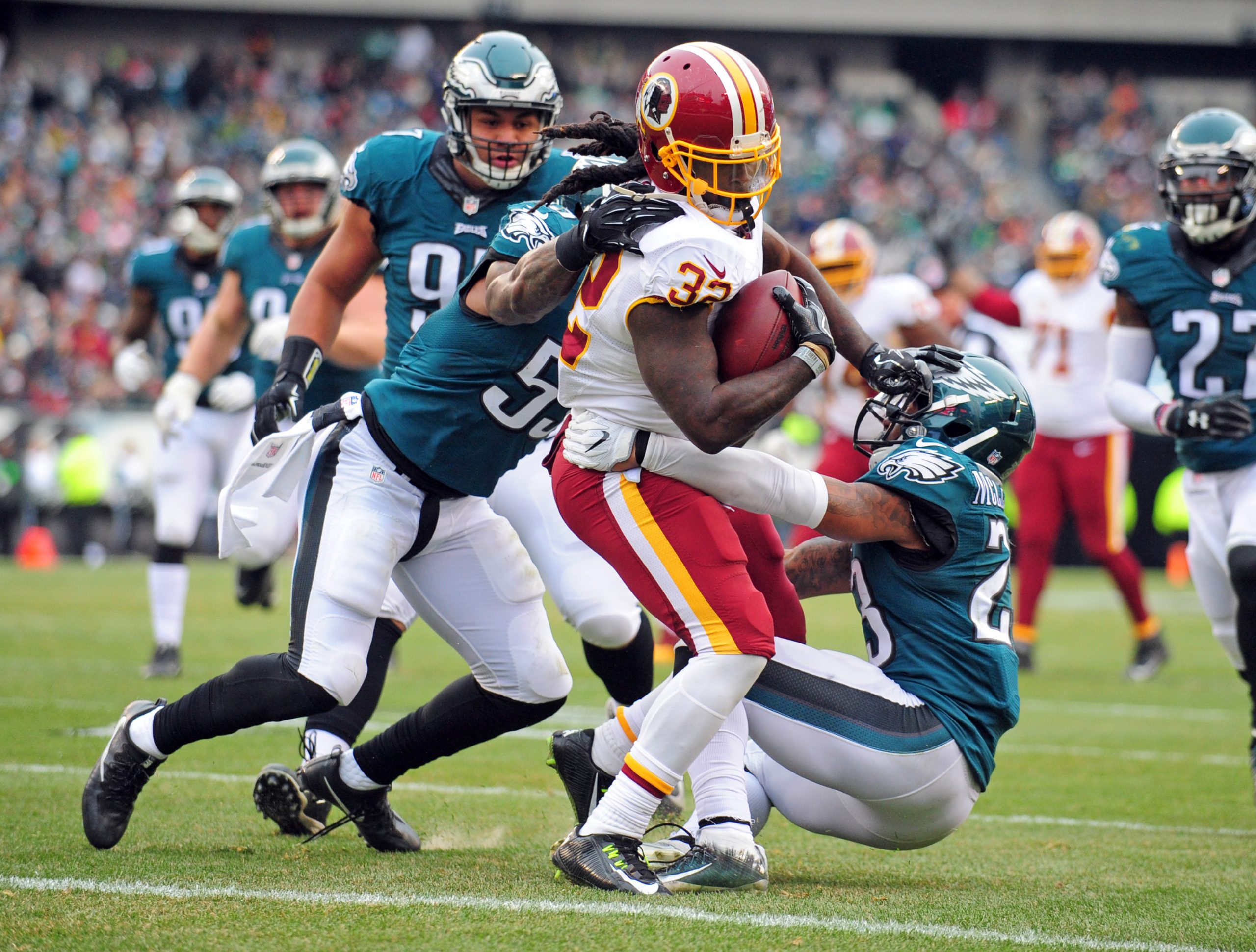 Nobody wants to blame a tough loss on officiating errors, when it was clear Ron Rivera’s overall game plan to keep the Eagles’ offense off the field was his main ingredient for victory.  He served up a tasty dish of defensive frustration for the Eagles to dine upon.  But the game was still up for grabs until a facemask penalty went uncalled—one which caused Dallas Goedert to fumble away a game-changing opportunity.

With 9:09 to play, Goedert was blasting forward at the Eagles’ 34 after a tightly covered reception. There was a blatant face mask grab on the play by Washington linebacker Jamin Davis that somehow was missed by the officials. Goedert lost the ball as he got yanked to the ground.  It led to Joey Slye’s 55-yard field goal with 7:33 left to play. That FG changed everything, making the score 26-21 in favor of the Commanders, as opposed to the Birds continuing downfield with a potential scoring drive in the making.

Any good luck the Eagles (8-1) may have had left in the tank vanished from there.

Frankly, they were lucky to be as close as that to coming back from a horrible first half.  They were outhustled, outcoached, and outgained, 235 to 101. The first two quarters saw the mediocre Commanders (now 5-5) convert 9 of 12 third downs, five-straight during one stretch. Washington ran 51 plays to the Eagles’ mere 19. The 51 plays were more than any NFL team ran in the first half this season. The time of possession was a lopsided 23:49 to 6:11.

Trailing at halftime for the first time this season, Hurts seemed to have one more big play left to pull out a victory. He connected on a deep ball to wide receiver Quez Watkins on a 51-yard reception late in the fourth quarter trailing 26-21. Watkins hit the ground, popped up and took off running, only to fumble the ball and give Washington possession.

“I was just trying to make a play. I know I didn’t get touched and I knew I had left him behind, so I just wanted to get up and get some extra yards,” Watkins said.

The Eagles turned the ball over four times, one more than they had the whole season up until Monday night, which resulted in 16 Washington points. They still had a chance to win the game when they took over at their own 20-yard line with 3:21 on the clock and three timeouts to work with. Sanders ran for two yards and then Hurts was pressured into an incompletion. Facing 3rd-and-8, Hurts stepped up in the pocket and tried to take off running … into Washington’s defensive line for a 5-yard sack. On the punt, Arryn Siposs had to sidestep a free rusher to get the kick off. He did … but the delay caused an illegal man downfield penalty, which made the Eagles redo the punt. And Siposs kicking it in the middle of the field allowed the clock to hit the 2:00 minute warning, wasting an extra chance for the Eagles to stop the clock.

“I think whether the calls were bad or good, or whatever it was, when you play the way we did tonight on all three phases … it does seem like everything’s going against you. And we played like crap. We didn’t do a good enough job … We made our own luck today, and it was bad.”

“Flush it and move on,” Brandon Graham said.  The defensive end was flagged for a late unnecessary roughness call on QB Taylor Heinicke that extended Washington’s final drive.

“I was just trying to touch him down, because it just looked like he was going to get up. You just never know. But that’s on me. I own that one. That’s on me,” Graham said

NFL referee Alex Kemp told a pool reporter Graham was penalized because Heinicke “had clearly given himself up.” “Therefore, he is down and a defenseless player. The contact by Philadelphia No. 55 was not only late, but also to the head and neck area,” Kemp said.

In the end, it was another questionable call that went against the Eagles. But it shouldn’t have mattered had the Birds taken care of business in building upon their early 14-7 lead.  Ultimately they failed to hit on the game-breaking plays that had defined their season, and had every flaw exposed in quite an imperfect performance.