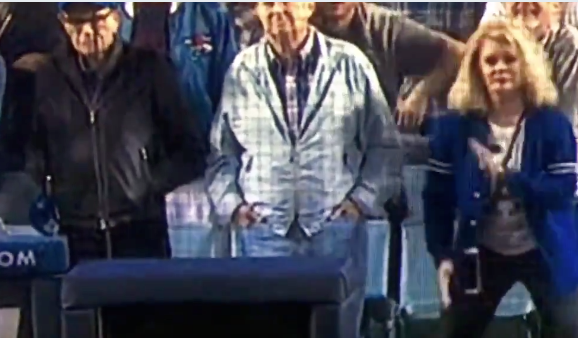 Los Angeles is known for its star appeal, so it was no surprise that the Dodgers had a few celebrities spotted behind the plate for Game 3 of the World Series on Friday night.

Television and radio host Larry King was in his normal seat behind home plate, which was to be expected. However, fans who tuned in to watch the game at Dodger Stadium saw an unexpected celebrity guest provide some entertaining reactions as well.

Former “Entertainment Tonight” television host Mary Hart was also seen in the first row, wearing a Dodgers sweater. She was just two seats away from King, and was spotted mocking Red Sox reliever Craig Kimbrel during the game, which made for a funny moment.

Kimbrel is known for his signature pre-pitch stance, as it resembles a chicken wing. Hart did her own variation of it in the ninth inning, on what looked to be an attempt to get in Kimbrel’s head, being that he was in a bit of a jam at the time.

Had the biggest crush on this gal. May I have this dance #Maryhart #Dodgers pic.twitter.com/UKXfPJiyBZ

Let’s all do the #Dodgers dance! #LADodgers #WorldSeries18 pic.twitter.com/HGBixZBZlG

Hart did a solid job of imitating Kimbrel, but the Red Sox pitcher was able to survive the inning by getting Brian Dozier out on a pop-up.

Still, Hart did her part in attempting to put some added pressure on Kimbrel, and she also nailed the troll job as well.